In Syria, From Fighting To Blogging, the Many Roles of Women 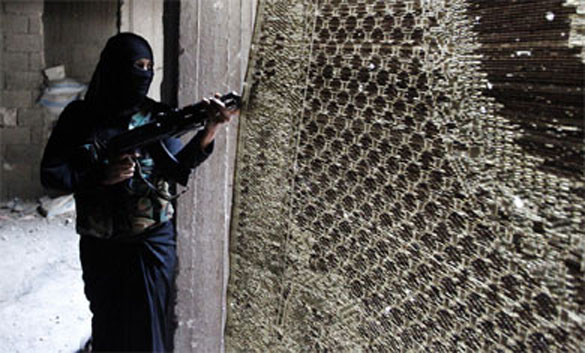 The face of a Syrian woman in Aleppo crouching in the rubble of a bombed hospital did not garner US President Barack Obama’s public acknowledgement in the manner of child survivor Omran Daqneesh. But the issue of women in Syria’s conflict deserves attention.

As the city of Aleppo continues to be burned, Grozny-style, by the Putin-Assad air-striking duo, international attention turns to tiffs and verbal parleys between the US and Russia. Sharp exchanges centre on bombed humanitarian convoys and charges of “barbarism”, recently triggering a US suspension of talks with Russia.

Syrians’ accumulating collective trauma, the result of years of proxy warfare that have claimed over 400,000 lives and displaced half the nation’s population, falls by the wayside. The international community is mostly apathetic.

But protesters, both men and women, had more than inciting sympathy in mind in 2011. “Freedom” and “dignity” were keywords of the peaceful and inclusive popular mobilisation that Syrians saw as their version of the “Arab Spring.” Five-and-a half years later, feminist scholar Cynthia Enloe’s famous query, “where are the women?” is part of a broader and more widely asked question “where are the people?”

In Syria’s popular uprising-turned-war, the Orientalist lenses that have been directed at Middle Eastern women underscore the urgency of such an inquiry.

But the biggest rejoinder to reductionism and omission in examinations of a fraying state and fractured society comes from women themselves.

Certainly in Syria, violence against women has been substantial. According to the United Nations, out of the 13.5 million people affected by the “crisis” in Syria, 4.1 million are women and girls of reproductive age, and 48% of 4.8 million UN-registered refugees are female. Of the 1,521 civilian deaths documented by the Syrian Network for Human Rights this past August alone, more than 40% have been of women and children.

Assad forces and militias have used rape – which was added in 2015 to the roster of non-state terrorist group crimes by UN Security Council Resolution 2253] – to torture female, child, and male detainees.

Sexual violence may be a manifestation of what Deniz Kandiyoti has termed an increasingly coercive “masculinist restoration” by threatened patriarchal regimes.

In an Arab-Islamic context, where the safeguarding of reputation is considered an individual and communal mandate, rape is a sadistically effective means of pressuring and baiting regime challengers.

Like other Arab revolutions, Syria’s uprising has also been notable for the widespread participation of both veteran activists and first-time women revolutionaries.

Women have been symbols of popular grievances against the Ba’athist Mukhabarat (security) state. They include blogger Tal al-Mallouhi, who has been detained by security forces since 2009.

A “popular uprising” may only be considered truly popular if women form a meaningful part of it.

In Syria, women have been nonviolent dissenters, raising their voices in the budding “revolutionary” media landscape, and caring for orphans, widows, and the displaced, often in exile - both informally and institutionally, as part of NGOs.

From their role as family breadwinners and their stubbornly blunt rebukes of international indifference, women’s participation in the Syrian conflict reflects the “popular” nature of an uprising that set in motion the vicious counterrevolutionary repression and violence that’s now tearing Syria apart.

Clean lines between peaceful and violent revolutionary activity are difficult to draw.

Assad’s purging of activists coincided with the country’s slide into civil and regional war. Female activists Razan Zeitouneh and Samira Khalil are among the Douma Four who were kidnapped nearly three years ago.

War has spurred and expanded female needs and activism. Some NGOs, such as Basamat for Development, focus specifically on women’s and children’s needs within Syria and in neighbouring Lebanon.

Women understand, too, that narrative remains central in shaping and navigating the course of events in Syria.

Women are sustaining and interrogating revolution-war storylines: founders of several local revolution-era newspapers, such as the now-bilingual Enab Baladi, include women. Female bloggers chronicle wartime life in articles that are often translated for English-speaking audiences.

Female protesters in Daraya decry in writing the siege and starvation that president Assad has used as a weapon of war.

In Syria, we see less of the scholarly-media-activist debates on the gender dimensions of parliamentary representation and legislation than is present in other Arab Spring-countries, such as Tunisia and Egypt. As the war grinds on, discussion has been centred on basic physical vulnerability; these issues will retain their primacy as long as the death toll continues to mount.

Internally, there have been challenges to women’s activism. For example, Jabhat al-Nusrah extremist group has attacked women’s centres, including the Mazaya in “liberated” Idlib province, which is run by award-winning Ghalia Rahhal, whose citizen-journalist son Khaled al-Issa was killed earlier this summer.

In the male-dominated context of raging war and insecurity, ensuring female presence in nascent institutions of self-governance, such as local councils, is a continual test. It is key to the aspirational pursuit of representative, good governance that inspired Syria’s early protests.

And What Of The West?

In post-colonial Arab societies, past and present encounters with Western countries still colour political discourse. EU and US-funded “empowerment” programs for the region’s women have simply been repackaged, trading their War on Terror accoutrements for more agency-conscious Arab Spring diction. In these circumstances, local resistance is not unexpected.

UN attempts to enhance the representativeness (that is, gender balance) of Syria’s political opposition have fallen flat, as seen in the blowback against “de Mistura’s women” - female advisers to the High Negotiations Committee. Still, the beleaguered Syrian National Coalition opposition body recently pledged to work toward a 30% female quota.

The perceived indifference to the Syrians conflict darkens even accolades bestowed on well-deserving revolutionaries such as journalist Khulud Waleed. Among activists, recognition of women’s agency are seen as meaningful only so much as they contribute to an ongoing “revolutionary” struggle.

And, indeed, international prizes themselves do not go far in Syria. Award-winning journalist Zaina Erhaim’s prominence did not prevent the British from confiscating her passport at Damascus’s bidding. In that vein, when she received the US State Department’s International Woman of Courage Award in 2015, Darayya activist and former detainee Majd Sharbaji penned a letter to President Obama, drawing a stark choice for him:

…either history will record that you closed your eyes and ears from the cries and screams of the thousands of Syrians in Assad’s prisons, or it will record your name as the man of peace able to rescue hundreds of thousands of innocent souls.

Syria’s war must end. But first its people - women, as well as men - must win their freedom and dignity for any substantive conflict resolution, or “political solution” in Kerry-Lavrov parlance, to take hold.