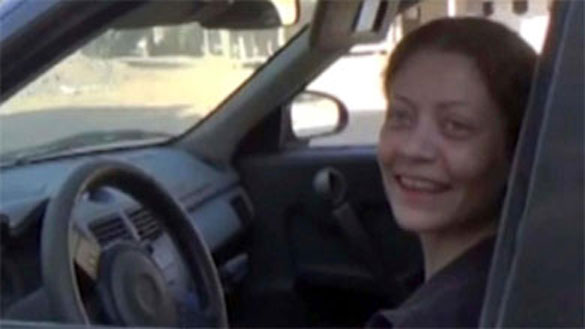 Undated frame grab from video of prominent Syrian human rights lawyer Razan Zaitouna, who fiercely but peacefully resisted Bashar Al Assad and opposed the militarisation of the revolt. Zaitouna disappeared after she was abducted in a rebel held suburb of Damascus in late 2013. AP

Days before the outbreak of mass demonstrations in Syria’s rural south nine years ago, a small group of women organised a protest demanding the release of political prisoners.

It was unthinkable under the iron rule of President Bashar Al Assad.

Among those arrested on March 16, 2011, was Dana Jawabra, an engineer from Deraa.

Her jailing and rough treatment helped to spark anti-regime marches in her home city two days later, cascading into events that made Syria one of the most devastating conflicts since the Second World War.

The south was already seething with anger over the arrest and torture of 15 pupils in Deraa.

They had scribbled graffiti on walls that said “the people want the downfall of the regime”, inspired by the uprisings in Tunisia and Egypt.

The authorities had received word of the planned action in Marjeh Square in Damascus and hundreds of secret police carrying concealed guns and batons were posted in front of the interior ministry, the site of the planned silent protest.

A few of the protesters gathered as a decoy in front of the main entrance of the Ottoman-era building, while most, up to 200 men and women, assembled at the side entrance. 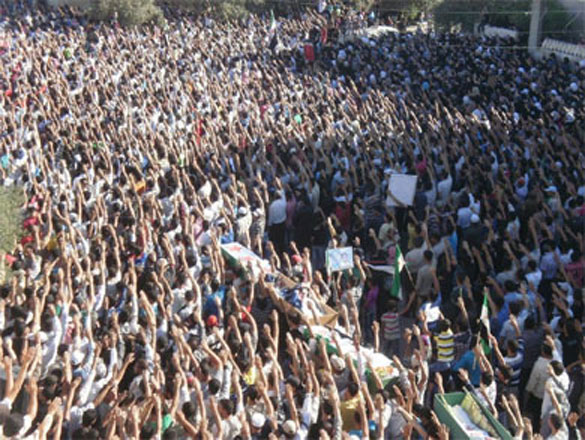 The funeral of Syrians killed by Syrian regime shelling on Deraa June 9, 2012. Reuters

The momentary security lapse allowed them to briefly raise photos of some of the thousands of political prisoners lingering in Mr Al Assad’s jails before the regime’s agents charged at them with batons.

One of the pictures was of Muhannad Al Hassani, a human rights lawyer who had devoted his career to the cause of freedom of consciousness in Syria, defending dissidents before he was jailed in 2009 for “undermining national morale”.

One of the regime’s personnel, carrying his baton with two hands, hit a protester’s head as the man had his hands up to signal his surrender. His skull broke and blood gushed out.

She was released in April and fled Syria, later becoming a senior figure in the National Coalition for Syrian Revolution and Opposition Forces.

The day before the Marjeh Square protest, a group of young protesters ran through the Hamidya Souq in old Damascus, shouting anti-regime slogans.

The authorities failed to apprehend them and although the protest was on the fly, some consider it the start of the Syrian revolt.

In January 2014, the opposition coalition entered peace talks in Geneva with the regime about a transitional governing body.

A Russian takeover of the Syria file in international diplomacy circles ensured that any transition western powers would consider credible had withered, and the opposition coalition is now practically defunct.

France, Germany, the UK and the US said on Sunday that a “credible political process” required “the Assad regime stop the ruthless killing”, a nationwide ceasefire, a reformed constitution, release of arbitrarily detained people, and free and fair elections.

The regime, dominated by Syria’s Alawite minority, had already killed, tortured and made to disappear thousands of Syrians in the 1980s.

The regime said that the societies who rose against the current leader’s father, former president Hafez Al Assad, in Idlib, Aleppo and Hama comprised “untrustworthy elements”.

The army massacred an estimated 20,000 in Hama in the 1980s, and millions of Sunnis who left the country since 2011 do not have much better status.

But the regime linked up with Sunni merchants in the cities, subsidised agriculture and paid thousands of informants in its Stasi-modelled system of control, and offered membership to the Baath Party in return for loyalty.

These policies gradually became unworkable in the decade before the revolt as mismanagement and corruption destroyed the water table, ruined agriculture and caused near famine in eastern Syria.

Hundreds of thousands of Sunni and Kurdish farmers and their families were displaced to what became slums around Damascus, Aleppo, Hama and Deraa.

Young, educated Sunnis who had sought to benefit from the lifting of restrictions on free enterprise in the mid-2000s hit a system of corruption linked to the security apparatus.

Traumatised by the 1980s, Sunni opponents of the regime developed their own armed response to the regime’s crackdown the second time around.

It is virtually impossible to gauge independent opinion in Syria, but an indeterminate proportion of Sunnis, particularly in Aleppo and Damascus, still regarded Bashar Al Assad as the best option.

The militarisation of the revolt, which began in the second half of 2011, was different in scale and spread to the localised insurgency of the Fighting Vanguard, and received limited support from regional heavyweights. 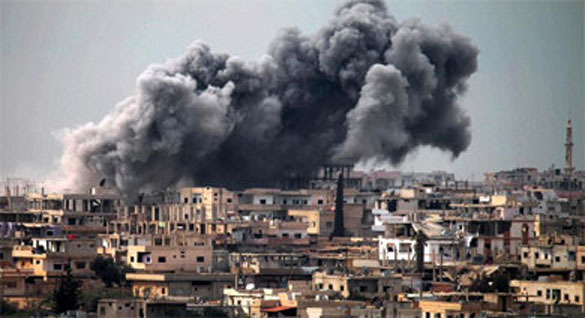 Smoke billows following air strikes on a rebel-held area in the southern city of Daraa on March 16, 2017. AFP

That support diminished after the Russian intervention in late 2015, which all but assured the perpetuation of the regime.

Hafez, 18, Mr Al Assad’s son named after his grandfather, is making public appearances that signal he is being groomed for eventual succession.

Almost from day one, Mr Al Assad’s survival strategy depended on finishing off the civic core of revolt through violence.

In May 2011, he also released from Saidnaya prison 1,500 mostly Sunni militants, many of whom became commanders in the Syrian subsidiary of Al Qaeda and other groups, as well as ISIS.

The regime supported the militants to undermine the US-imposed order in Iraq after the fall of Saddam Hussein in 2003, before cracking down on the same militias under pressure from Washington.

But paramount to the Women of Marjeh Square, as the organisers of the March 16 protest came to be known, was peaceful disobedience.

Their call to maintain non-violence was not heeded in the months that ensued.

Security forces shot, or imprisoned then killed, thousands of protesters, sparking a violent Sunni backlash that cost the lives of many Alawites enrolled in Mr Al Assad’s army and loyalist militia.

Razan Zaitouna, a prominent lawyer who defended some of the 36 protesters arrested on that day in Marjeh Square, was later forced into hiding to escape imprisonment. 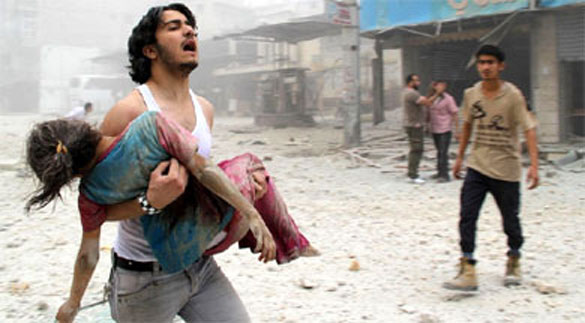 A young girl wounded in a regime barrel-bomb attack on Aleppo on June 3, 2014.0 AFP

In October, as popular Sunni momentum to take up arms against Mr Al Assad picked up, Ms Zaitouna said as she hid in the Damascus suburb of Douma: “Maintaining a peaceful uprising is the best guarantee for its victory.

“It is normal that after seven months of bloody repression, lack of unity among the opposition and lack of international action that we see the surfacing of a militarisation of the revolution.

“Our role as activists is to work on stopping these leanings.”

In December 2013, Ms Zaitouna, her husband Wael Hamadeh and two other dissidents, known as the Douma Four, disappeared.

Jaish Al Islam, a rebel formation then led by the late Zahran Alloush, one of the top militants released from Saidnaya, is widely suspected of having kidnapped them.

While Mr Al Assad is relatively safe in his seat of power in Damascus, and still possesses many tools of repression, Syria’s war is dragging on and its economic collapse has intensified with the financial meltdown in Lebanon.

The severity of the living conditions is hitting the president’s Alawite base, and the government is insisting that that no coronavirus cases exist in the country, for fear of undermining the image of Iran.

US sanctions are intensifying and western countries have resisted Russian pressure to pay for reconstruction without any serious political change in the country.

Despite having Turkey as a common enemy, Mr Al Assad and the militia have failed to reach a permanent agreement.

But the regime has recalibrated its business base to integrate many of the war economy figures under a revamped patronage system whose members owe loyalty to Mr Al Assad or his close relatives.

Regardless of the costs of the war to his opponents or to his loyalists, the well-being of the inner circle has been the driver of 50 years of the blood-forged rule of the Assad dynasty.