The Pennsylvania woman who called herself Jihad Jane and a teenage accomplice from Maryland provided "very significant" assistance to U.S. authorities in several terrorism investigations but still remains a threat to the public, prosecutors say in new court filings.

Prosecutors said Colleen LaRose, 50, should be sentenced to "decades behind bars" for her role in a failed 2009 plot to kill Lars Vilks, a Swedish artist who offended many Muslims by drawing the Prophet Mohammed on the head of a dog. 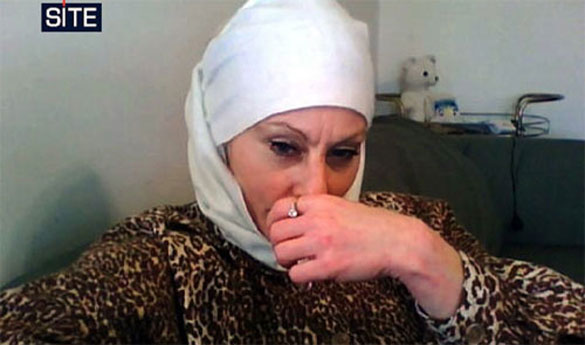 After years of delay, the American-born LaRose is expected to be sentenced on Monday in Philadelphia. A similar hearing for Mohammad Hassan Khalid, the youngest person ever charged with terrorism in the United States, is set for Tuesday.

U.S. guidelines call for LaRose to receive a life sentence and for Khalid, who is now 20, to receive 15 years. Given their cooperation, prosecutors asked the judge to sentence LaRose to "decades behind bars" and Khalid to "less than 10 years."

In a presentence filing this week, U.S. authorities reiterated what they declared when LaRose's arrest was made public in 2010 - that her gender, blond hair, Texas twang and green eyes make her case significant because she does not fit the stereotype of an Islamic terrorist.

"News of LaRose's arrest spread shockwaves throughout the West, as people recognized that the face of the terrorism threat had changed forever," prosecutors Jennifer Arbittier Williams and Matthew Blue wrote. "The world is watching, and this sentencing presents an important opportunity to send a strong message to other lonely, vulnerable people who might be enticed by online extremists promising fame and honor."

"I survived a lot of things that should have rightfully have killed me," LaRose said in an exclusive interview from jail in 2012.

LaRose was living with a oft-travelling boyfriend in 2007 when a romantic encounter with a Muslim man sparked an interest in Islam. After months of learning online, LaRose said, she converted to Islam and later watched videos of alleged U.S. and Israeli atrocities against Palestinian children that radicalized her.

By 2008, prosecutors said, "she had managed to align herself with violent terrorists who valued her ability and persistence as their online predator, or â€˜hunter,'" recruiting new fighters.

"I just loved my brothers so much, when they would tell me stuff, I would listen to them, no matter what," LaRose told Reuters. "And I also was ... lost."

In 2009, LaRose followed instructions from an al Qaeda operative in Pakistan and flew to Europe for the plot to kill the Swedish artist. But after six weeks, largely in Ireland, LaRose became frustrated with the mission's pace and returned to Philadelphia, where she was arrested.

Prosecutors said Khalid, who grew up in Pakistan, lived a double-life after moving to Maryland - as "a polite and studious 15-year-old" and "a tireless soldier for violent jihad." He helped al Qaeda by translating videos from Urdu to English, inciting others, and aided LaRose as she smuggled a stolen U.S. passport to a terrorist, they said.

LaRose's lawyer, Mark Wilson, could not be reached on Wednesday. Khalid's lawyer, Jeffrey Lindy, declined to comment. But documents in the case show the lawyers will cite deep mitigating psychological issues as they argue for shorter sentences.

For his part, the intended victim said in 2012 that LaRose has served enough time. "They should let her go," Vilks said.