Shereen El Feki, reluctant revolutionary in the disguise of a polite Egyptian-Canadian, is explaining the class distinctions of Cairo’s gay scene to the packed upstairs room of a London bar.

Petite with a pixie haircut, El Feki's audience of mostly young women has its fair share of middle-aged gentlemen too, eager to hear her speak about what could be the most revealing take on Arab sexuality in 1,000 years in Sex and the Citadel: Intimate Life in a Changing Arab World, an eye-popping audit of the frustrations Arab men and women face in the pursuit of sexual relationships. 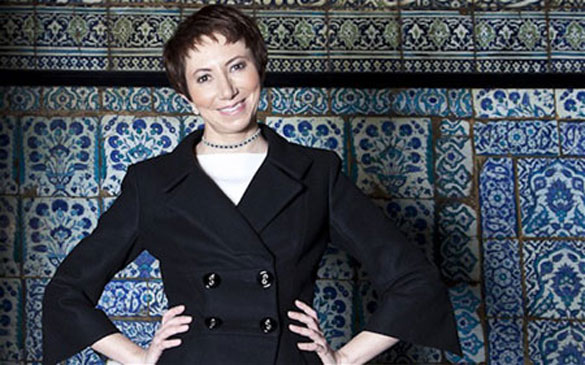 Sensuality in Islamic literature has a long, though uneven, history, and one that El Feki thinks the Middle East has a unique opportunity to rediscover in the aftermath of the uprisings that began in late in 2010, as she tells me the next day.

El Feki describes her upbringing in Waterloo, a town near Toronto, as "very civilised," spent largely in "academic surroundings" with her Cairo-born neurosurgeon father and her mother, a schoolteacher from Wales. "There was a Muslim community there, but being Muslim in the West was not an issue when I was growing up," she says.

Post 9/11 that changed. Hardening attitudes to Muslims in the West, and the growing ranks of Muslim Brothers back in her father's homeland pushed the two poles of her identity further and further apart. Sex became a lens through which to observe these changes.

Few Muslim taboos survive her systematic approach in the book. Impotence brought on by the stress of revolution, domestic violence, the anxiety to preserve virginity among the unmarried, female genital mutilation—all are scrutinised with the same uncompromising gaze.

Sex and the Citadel presents the factual and anecdotal case for better access to contraception in marriage, for women divorcing to be granted the same rights and respectability as men, and for single women to be allowed to live and work freely without state or family censure.

There are comic moments too. Saudi Arabia is described as an unlikely lesbian haven, where the concept of a sexual relationship between two women is little understood by religious police patrolling shopping malls for evidence of vice.

El Feki trained as an immunologist before becoming healthcare correspondent at The Economist, presenting shows on Al Jazeera English and later becoming vice chair of the UN’s Global Commission on HIV and the Law. It is this scientific training that is key to understanding her wish for "people come to their own conclusions" about her work.

When the Arab Spring brought down dictators across the Arab region in 2011, El Feki was three years into an odyssey that took her across the Middle East and North Africa, the results of which became Sex and the Citadel.

"I was in Tahrir Square in the fall of 2011—during the uprising's second wave, against army rule—and again earlier this year, during the protests which marked the second anniversary of the uprising," she tells me.

"The atmosphere was different on the two occasions: while men made way for women's marches and listened to us with respect two years ago, this year, there was a jagged edge to the atmosphere, and I was subjected to verbal sexual harassment.

"How to recapture that solidarity, given the huge fractures in Egyptian society, is our challenge in the years to come."

El Feki speaks Arabic but is most at home in English, and appears just as comfortable chatting with Tunisian sex workers as UN diplomats, lending her a disarming confidence about the failings of East and West.

"I think there’s an impression in the West that Arabs are quite frankly just f***ed up and we’re wallowing in sexual oppression," she says at one point.

Or when she admits, with affection: "In Egypt it is quite frankly a complete disaster what is happening right now in the country, politically, economically and in terms of security, but it is a necessary messiness for us.

"If we had made a tidy transition from, let’s say, Mubarak to Shafiq, who came from the old regime, and we didn’t have all this controversy over the Muslim Brotherhood, I wonder if we would really be able to cut our teeth and develop."

Just as Arabs are often portrayed as unable to adapt to democracy, they are similarly described as repressed when it comes to sex.

This is in stark contrast to the vision of a sex-crazed populace as encountered by French novelist Gustave Flaubert, who wrote a letter home from his travels in Egypt in 1849.

"Here it is quite accepted. One admits one's sodomy, and it is spoken of at the table of the hotel," he advised a friend, with his adventures in brothels and streets up and down the length of the Nile eventually filling an entire volume of work, A Sensibility on Tour (Le voyage en Egpyte).

In fact, Sex and the Citadel has a decidedly Western approach to the Middle East's sexual issues, which El Feki knows is at odds with the usual way of touching on any delicate topic for many Arabs.

"Very often it’s a bit like a runway; you have to get on the [landing] strip. The information’s not presented up front and there are all sorts of circuitous ways of expressing ideas," she says, describing how the structure of newspaper articles, in this example, mirror how so many Arabs struggle to talk about these issues.

This leads, she argues, to the impression in the West that those living in the Middle East are consumed by lust, but aren't quite sure what to do about it.

"We need to find creative ways of talking about these issues. We need to call things differently," she adds. The Western "obsession" with transparency and clarity "doesn't work" in the same way, she claims.

She gives the example of sexual education in schools, which many well-meaning charities will describe as such. "Don’t call it sex; it’s called family education," she advises. "At the end of the day it doesn’t matter what it’s called; it matters what it is."

A chapter on marriage, the "bedrock" of Arab society and the only legal way to have sex in the majority of the Middle East, is one of the saddest in the book. The double bind of needing to please a man, so he won’t divorce you while simultaneously appearing as virtuous as possible puts many of the women El Feki interviews into distressing situations.

Women such as Wisam, who tries to press charges against an abusive husband but is told by Egyptian police it is a “man’s right to discipline his wife”, show just how ingrained patriarchal attitudes remain in the region. In Egypt, a third of men believe it is right to beat one’s wife if she leaves the house without informing her husband and a quarter if she refuses sex.

One popular (female) TV sexologist is quoted as saying: "He is exposed to many temptations outside the home. Be available to please him and do not give him a reason to make a choice between you and hellfire."

Another fear, of marrying “outside", is particularly acute in Gulf states such as Qatar and the UAE, where up to 75 per cent of the population is made up of immigrants. It is fairly common for men in these countries to marry Western women, though rarely the other way around.

“There is a real worry - what are we going to do if the men stop marrying our women. And I don’t think these marriage funds are going to solve these problems,” she says, referring to the money given to poorer men by the state in these countries to help them afford a wedding.

“No amount of money you throw at a situation where you have more women than men in university, highly educated women, with men who still have traditional views in what they want in a wife, no amount of money is going to solve that," she adds, referring to the UAE and Saudi Arabia, where more than half of university graduates are now female.

The effect on families of fathers absent for long stretches is acute. “When I was a child all the family lived in Egypt except my father and my mother, and my grandmother would bring everyone together and we would have Friday lunch,” El Feki says.

“Now when I go the family is in Dubai, or the States, or Qatar, and no one has time. Everyone is so busy working.

“As the family ties break down, because there’s no welfare state basically a lot of the services that were provided by the family are no longer available so what are you going to do?”

In the absence of any viable alternative, the family becomes essential to survival, but therein lies another problem.

“When will you have the courage to tell your father, resist your father, in the same way you resisted the father of the nation?” El Feki asks.

“That’s not going to happen until there are structures that allow you to do that, until you can get a job and be economically independent of your family.

“The change has to be that you have individual rights and recourse to the law.”

But El Feki claims she wants any challenge to the mini Mubaraks at the head of households and offices to take place within the strictures of Islam.

While it is not unthinkable this could happen within a liberal reading of Islam, no Arab country is anywhere near granting these rights to any but a privileged élite.

El Feki believes this is a temporary blip, the cathartic "necessary messiness" required for Arab nations to realise their true political (and sexual) selves.

"With the uprisings people are saying no, you can’t tell us what is right and wrong in Islam. That has become very pronounced, the pushback against the Islamic conservatives and their one-size-fits-all Islam," she says.

It is, she says, "Incumbent on us as Muslims to think about our faith," and to move away from the model whereby Muslims "Recite Qu’ran but they don’t have the intellectual freedom or the mental space to ask hard questions.

"It’s much easier for them to send in a message on the internet or call in a TV sheikh who will spout some sort of fatwa."

El Feki is clearly religious, easily quoting sayings of the Prophet Mohammed, eschewing alcohol, and speaking passionately about the corruption, in her eyes, of Islam by conservative forces.

I ask whether her own experiences as a practising Muslim and Western academic might have had their own place in her book, later in the week when she is about to fly off to New York. She laughs, and says: "I see myself as a catalyst. The basis of the change is already there; I'm just the spark."