This past weekend, Iran’s most prominent human rights defender, Nasrin Sotoudeh, entered the hospital because of heart and respiratory problems resulting from a nearly six-week-long hunger strike. Sotoudeh is a veteran of this extreme form of protest, but this time the circumstances are much direr for her and other political prisoners in the country. 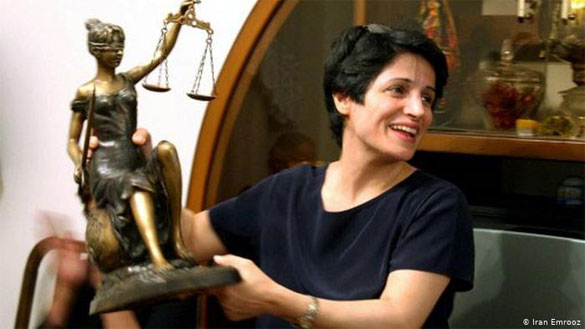 On Aug. 12, the 57-year-old lawyer stopped eating to protest the scandalous mistreatment of prisoners of conscience currently detained in Iran. The refusal of Iranian authorities to take any meaningful precautions to protect the health of political prisoners during the novel coronavirus pandemic dramatizes the depths of the government’s contempt for civil society and basic human rights.

For years Sotoudeh has been on the legal front lines, defending Iranians who dare to question the Islamic republic’s archaic laws and their arbitrary enforcement. In recent years, she has represented women who protested the forced hijab and those calling for the end to the death penalty.

The country’s economy is falling apart — thanks to decades of state mismanagement, the pressure of indiscriminate U.S. sanctions and the third wave of coronavirus infections. So you might think that the regime in Tehran has more pressing battles than suppressing dissent.

At the moment, however, the leaders of Iran simply do not appear to care about public outrage over the regime’s abuses, whether domestic or international.

That hasn’t always been the case. “In the past, the government has backed down when it came to Nasrin and they were not happy they had to do it,” Reza Khandan, Sotoudeh’s husband, told me in an email. “They are afraid of her becoming a role model and proving her point. That’s why this time they are trying to be really hard on her.”

I first met Sotoudeh and Khandan at their home in Tehran, seven years ago this week. It was a very different time. Sotoudeh had just been released from Evin prison after serving about half of a six-year sentence for allegedly acting against national security and spreading propaganda against the government.

Glad to be reunited with her family, she was far from satisfied. “I am happy, but I’m worried for my friends who are still in prison without having committed any crimes,” she said.

Yet she was optimistic, telling me that she thought her release was a gesture by Iran’s newly elected President Hassan Rouhani. “Rouhani is sending a message to the world and he is engaging, first with his own people and then with the rest of the world,” she said.

Now, as Rouhani’s presidency stumbles through its final months, the opposite seems true.

The Iranian political machine has apparently concluded that there is no reason it should listen to any international pressure or criticism, since no entity with any international authority is doing anything to hold Iran to account for its gross human rights violations.

This month the government executed national wrestling champion Navid Afkari for taking part in anti-regime protests in 2018. Authorities claim he killed a plainclothes security agent of the state in those riots, but they have never produced any evidence implicating Afkari in that death. Before he was hanged, he repeatedly proclaimed his innocence, saying his conviction was based on a false confession extracted under torture.

President Trump called on Iran to halt the execution, but the regime proceeded as if it wasn’t paying attention. And that was the end of it — presumably because the current U.S. administration has taken zero action to impede the Iranian regime’s brutality. Instead, the punitive measures on Iran, in the form of blanket economic sanctions and travel bans, end up hurting ordinary people rather than deterring the regime’s thuggish instincts.

Notably, former vice president Joe Biden, the Democratic candidate for president, wrote an opinion article in which he promised to call out “the regime for its ongoing violations of human rights” if he wins election in November. He singled out Sotoudeh as one of his likely priorities. If Biden were to stick to that pledge as president, it would be the most radical change to U.S. policy on Iran after decades of failures.

Human rights activists in Iran have often heard hopeful words from Washington, but the rhetoric has rarely been followed by action. Now they are urging American and other international leaders to act rather than simply pay lip service to the issue.

“Human rights are vital,” Khandan told me. “Downplaying their importance has already led to human and environmental disasters. International leaders should take human rights out of their display cases and bring them to the table.”

A forthcoming documentary film about Sotoudeh and her work, shot mostly in Tehran and narrated by Oscar-winning actor Olivia Colman, will ensure that her vital work remains in the forefront of global awareness.

The U.S president might not care, but the rest of the world should remember that activists such as Sotoudeh are giving countless Iranians a voice against the injustice that they would not otherwise have.

Original Headline:  Why Iran’s leading dissident is fighting for her life