By Masih Alinejad and Roya Hakakian

For the past 42 years, Iran’s clerical leadership has defended the regime’s harsh Islamic dress code by claiming that mandatory wearing of the hijab is women’s best defense against men’s sexual advances. Yet over the past few weeks, Iranian women have offered up a devastating rebuttal of that claim — by coming forward to accuse employers, colleagues and even some senior officials of sexual crimes and harassment. 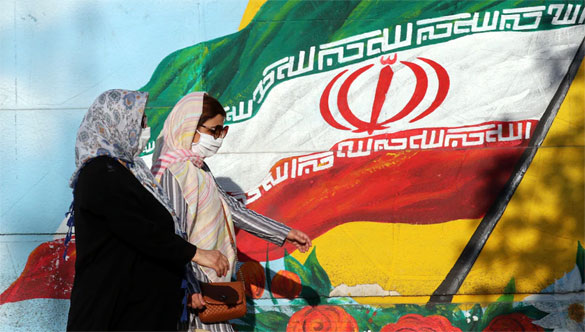 Iranian women walk past a mural of Iran's national flag in Tehran on July 28. (Abedin Taherkenareh/EPA-EFE/REX/Shutterstock)

The accused range from Revolutionary Guard commanders to renowned artists and ordinary citizens —implying a deep and systemic crisis of moral legitimacy at the heart of the regime not unlike the one recently faced by the Catholic Church: The theocracy that has touted itself as the guardian of good conduct and high virtue proves to have done no better, and possibly worse, than the Western societies it has so scathingly criticized.

The women’s testimonies recall those given by the accusers of Harvey Weinstein and Bill Cosby. The most recent of the accusers, Sara Omatali, a former reporter, broke a 14-year silence with a series of now-viral tweets, opening the floodgates for others who are following her example. She related an encounter with the renowned artist Aydin Aghdashloo, whom she was supposed to interview. Rather than meeting her in the exhibition in the museum, the artist allegedly urged her into his office instead. She said that when she entered, he appeared naked with only a cloak around him, then proceeded to forcibly hold and kiss her. Omatali managed to free herself from his grip and flee the scene. Aghdashloo has made no comment on the allegations, but his son has denied them on his behalf.

In a statement to the authors of this article, she writes: “For years and years, I felt shame, guilt, and disgrace. I’ve considered myself a careless woman who should have been more cautious. I blamed myself! But, the more I’ve read about #MeToo movement, the more I realized that these are normal feelings of a survivor of sexual assault.”

Before her revelations, numerous anonymous women had written about the horrors they had experienced. What makes Omatali’s account ground-breaking is her willingness to speak out in public against a powerful man, in open defiance of a culture in which women are usually considered the cause of the very assault they suffer.

Omatali, who lives outside of Iran now, has access to an uncensored public platform. She is also the beneficiary of all those who bravely came forward before her despite facing the incredibly hostile conditions of the Islamic republic. Several other journalists inside Iran have also made public similar abuses. Four years ago, Sheena Shirani, an anchor-woman at state broadcaster Press TV, related an incident in which one of the company’s executive producers allegedly locked her in his office. But she found herself deeply isolated amid the public uproar that ensued.

In another high-profile case last year, a court convicted a former chief of the Revolutionary Guards, who was also a five-term member of parliament, of the 2014 rape of a female constituent, Zahra Navidpour, who had gone to his office in the hopes of finding employment. When she went public with the account of the crime, he threatened to kill her and members of her family. Despite the threats, Navidpour kept speaking out — until she was found dead, allegedly by suicide. Her attacker served a brief stint in prison, but soon he received a pardon and was released. Such cases lay bare the ubiquity of a misogyny from which there is no protection and for which there is no impunity.

Amid these latest revelations, it is worth noting that ordinary women have been waging a battle against nameless abusers on the streets for years. It turns out that the best safeguard against sexual predators is the cellphone. The popular hashtag #MyCameraIsMyWeapon has empowered women to turn the proverbial tables on their abusers who are forced to flee when they realize that they’re being filmed. By pushing back against their perpetrators, the women invariably speak against the regime. Their claims also indict an ideology that depicts men as creatures with no self-control who cannot be held accountable for their actions if women do not hide themselves under a veil.

In finding the courage to speak, some of these women have undoubtedly been inspired by the #MeToo movement in the West. But the sum of all these cases is greater than its parts. What these women have learned, first and foremost, is that the hijab is only a piece of fabric, one that cannot protect them from predators. What can actually shield them from sexual harassment is the rule of law, and a society in which no individual figure can reign above the constitution. In contrast to the #MeToo movement in the countries of the West, which aimed to upend gender inequality, the current outpouring in Iran does not see gender inequality as the problem but merely as a symptom of a more serious affliction: the regime itself.

Masih Alinejad is the founder of the #WhiteWednesdays campaign in Iran. Roya Hakakian is the author of “Journey from the Land of No: A Girlhood Caught in Revolutionary Iran.”