Patriarchy Was Constructed and Can Be Deconstructed in Arabic Societies

The world celebrated International Women's Day on March 8 2020. Such symbolic days, however, seem to have little effect on the actual status of women in the world as a recent United Nations report notes.

Despite strides towards greater gender equality, the world body notes there is not a single country which has achieved gender equality. Moreover, 90% of men and women hold some bias against females. 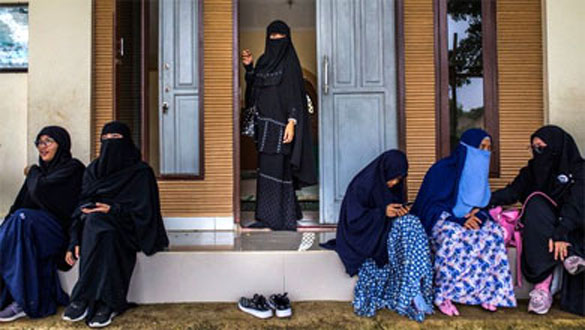 Women lead a protest against lack of women's rights in Turkey during the International Women's Day celebration on March 8 in Amsterdam, Netherlands. /Getty Images

The statistics are alarming: 50% of men thought they had more rights to a job than women, and a third of respondents in 75 countries felt it was acceptable for men to hit women. In China, 55% of respondents felt that men make better political figures.

Even in what used to be regarded as the bastion of liberal democracy, the US, 39% agreed with the statement that men make better political leaders.

Disappointing as these figures are, there is hope if one considers how patriarchy is being overcome in the Middle East and North Africa (MENA) region. It is here where patriarchy first developed between 3100 BC and 600 BC. It is also the region which has experienced the least gender progress in the world. The figures are incontrovertible.

Given the widely held view that women belong in the domestic sphere, focusing on keeping house and child-rearing, there are low rates of participation of women in the labour force.

Only 24% of women in the MENA region are employed, while the figure for their male counterparts is 77%.

Moreover, according to a report of the International Labour Organisation, young women with higher education have a slim chance of entering employment than their less-educated male counterparts.

This has negative consequences for the household economy and the economy at large, and it perpetuates greater dependence on male family members - husbands, fathers and brothers. Patriarchy, built as it is on vertical power relations, is [therefore] further entrenched.

The absence of women in positions of power is glaring in the MENA region, as is their absence in governance which is made possible by patriarchal attitudes.

According to the Arab Barometer the majority of respondents believe in limiting the role of women in society. Within the home, 60% believe that the husband should be the final decision maker. Moreover, only a third of the Arab public believe that women are as effective as men in public leadership roles.

While the marginalisation and oppression of women is a sad truism of MENA countries, this should not be the norm. Patriarchy was constructed and can be deconstructed.

The challenge for feminists then is to actively resist their marginalisation in conjunction with other progressive players and to utilise the tectonic changes underway in the Middle East - from the penetration of the internet, to making common cause with progressive forces in society to open up the democratic space.

Democratic space in this sense does not only mean the fight for the ballot but also emancipation in every sense - including freedom from patriarchy. There is reason to believe that some of this is beginning to happen in the region.

Consider, for instance, how Morocco's rural women in an effort to access land from conservative tribal authorities, formed action committees called Sulaliyyates. These challenged tribal authorities and women's subordination at home and at work.

There is reason to believe women's experiences in mobilising against authoritarian regimes in the region have resulted in a new consciousness on their part.

They see the connection between their own oppression and the need for emancipation of the broader society. When women took to the streets against Omar al-Bashir in Sudan it was their awareness of how fuel shortages and inflation brought on by corrupt and inefficient governance were affecting household food security.