Malala's Fight for a Modern Pakistan

Although Malala Yusufzai did not win the Nobel Peace Prize, the mere fact that a 16 year old was seriously considered for the honor is significant. Such global attention for a teenager would be cause for national celebration in almost any country of the world. Not in bitterly divided, conspiracy theory-prone Pakistan. 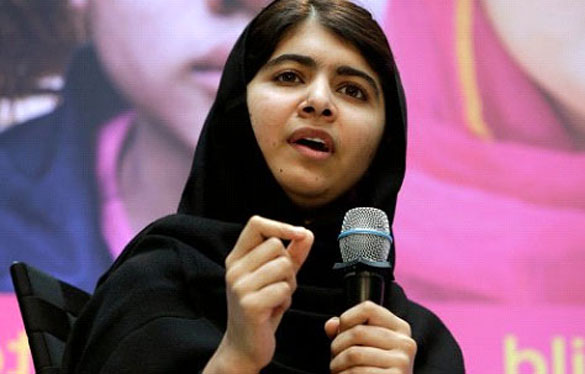 Islamists and hyper-nationalist Taliban apologists claim that honoring 16-year-old Malala Yusufzai is part of a Western design to impose Western values on Islamic Pakistan. The criticism from Malala’s Pakistani detractors highlighted the national malaise that young Malala has committed herself to fight.

As an eleven year old five years ago, Malala stood up for her right to an education in the beautiful but remote Swat Valley in Northwest Pakistan, where the Taliban sought to impose their obscurantist version of Islam by force of arms. In doing so, she showed more courage and foresight than many of Pakistan’s politicians, generals and public intellectuals who have gradually ceded space to extremist Islamists, projecting them as a nationalist reaction to U.S. dominance or Indian influence rather than a menace that would set the country back several centuries.

Pakistan’s leaders have been in a deep state of denial about their national priorities for a long time. Religious extremism and terrorism are often not seen as a serious threat for a nation that has, since its inception in 1947, focused on acquiring military parity with its much larger neighbor, India. Instead of seeing the Taliban as brutes fighting modernity, Pakistan’s strategic planners considered them as allies against Indian influence in Afghanistan after the withdrawal of the Soviet Union.

Terrorist groups with ideological affinity to the Taliban were assisted by the government in hopes of resolving its long-standing dispute with India over Kashmir.

Although Pakistan has lost thousands of its own citizens and soldiers to terrorist attacks since 9/11, strategic delusions continue to prevail. Even some Western educated Pakistanis seem to condone violence against minorities and terrorism in the name of Islam, describing it only as a reaction to Western colonialism and American global influence.

In such an environment, Malala’s choice of modern education and her willingness to face the threats of violence from the notoriously unforgiving Taliban was definitely an act of great courage.

Malala, a young village girl with little outside exposure, wished to connect to the rest of the world. She says she was inspired by Benazir Bhutto, who became the Muslim world’s first woman prime minister and was killed in 2007 by terrorists for challenging their ideas. In doing so, Malala went against the Pakistani national discourse, which is dominated by sympathy for militant Islamic extremism.

Since 1977, when Dictator General Zia ul Haq started Pakistan’s Islamisation, an entire generation of Pakistanis has grown up with textbooks that conflate Pakistani nationalism with Islamist exclusivism.

Anti-Western sentiment and a sense of collective victimhood have been nurtured as a substitute for serious debate on social or economic policy. The country’s resources have been devoted to maintaining a large military and expanding its nuclear arsenal, with inadequate investment in education, healthcare and other social needs.

The result is Pakistan featuring on virtually every list of states facing the potential of failure. Half of Pakistan’s 193 million people remain illiterate, population growth remains high and economic growth has risen only in periods of increased flow of aid from the United States.

Malala’s embrace of pluralism contrasts sharply with the stance of several influential Pakistanis. For example, Oxford-educated cricketer-turned-politician Imran Khan whose party was the second highest vote-getter in the country’s May 2013 legislative elections, has often praised the Taliban including their imposition of Sharia.

Although he expressed regret over Malala not getting the Nobel, members of Khan’s party recently spearheaded a campaign on Twitter to describe Malala’s recent activism in support of girls’ education and liberal values as an American-funded drama.

Nothing illustrates the crisis in Pakistan, and possibly a large part of the Muslim world, better than a recent book published by the head of Pakistan’s largest institution of higher learning, the Punjab University.

Dr. Mujahid Kamran, with a PhD in Physics, claimed that 9/11 was an inside job and Al-Qaeda was a CIA asset. He also said recently that "The U.S. and British governments are controlled by a high cabal of banking families, who seek to manipulate each of us by putting microchips in our brains and who sponsor terrorist attacks in Pakistan.”

Malala has demonstrated wisdom beyond her age in shunning the obscurantism and conspiracy theory obsession of the society in which she was born. In her, Pakistan’s embattled modernizers and liberals have found a new hero.

Husain Haqqani served as Pakistan’s ambassador to the United States from 2008 to 2011. He is a senior fellow at Hudson Institute and Professor of International Relations at Boston University. His book ‘Magnificent Delusions: Pakistan, the United States and an epic history of misunderstanding’ is scheduled for publication by Public Affairs next month.