Whoever thinks that women should be confided to the comforts of their homes, 'like before', obviously has no idea about the good old days.

This second instalment in the series of articles on Women and Islam focuses on working women. The presented excerpt, from a study titled The Urban Economic Life of Women in Islamic Egypt, was first published in 2007 by the Women and Memory Forum -- founded in 1995 by a group of women academics, researchers and activists aiming to highlight, and revive, the role of Arab women in history as a means of empowerment. 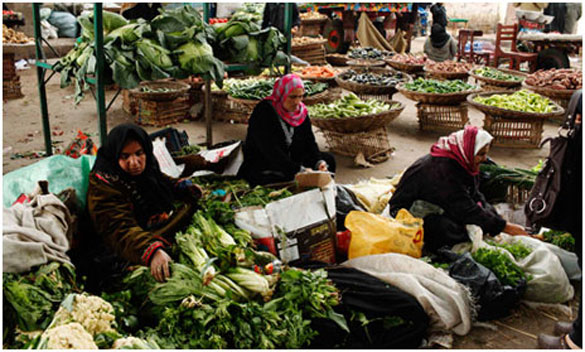 Women sell vegetables at a market in the Egyptian Delta town of Zagazig (Photo: Reuters)

The study explores the presence of women in the economic and mercantile life of Islamic Egypt up to the end of the Fatimid Caliphate. Through the findings, we question the patriarchal ideal of female economic dependency, and the segregation of women in public life.

While numerous references directly or indirectly point to the wealthy women from elite circles, and to the women working in the courts serving said elite, the realities of ordinary working women's lives rarely attracted the attentions of medieval chroniclers, whose work was commissioned – and sponsored – by the courts.

Luckily, Arabic papyri documents, the Cairo Geniza Records and commercial documents from Al-Quseir compensate such an absence as they contain scattered but interesting information on 13th century Egyptian working women. The Haram Collection of documents, emanating from the late 14th century court in Jerusalem and the endowment deeds of 15th century Cairo are important Mamluke documents -- surviving in their original form -- that furthered our understanding of gender relations. Also, the abundant Ottoman legal records were utilised and examined by many researchers to interrogate the economic roles of women under Ottoman rule.

Women, the documents revealed, were engaged in a number of professions and rendered various services in society. Such occupations roamed freely between women, as related jobs and regular professions. They ranged from female teachers and managers of female ribats (fortified retreats) to midwives, wet nurses, hairdressers (mashta), matchmakers (khatba), washers of the dead (ghasila), mourners of the dead (na'iha), bath attendants and prison attendants. All such services were well regulated, soliciting skills and knowledge from the women practicing them, as explored below.

The midwives and wet nurses: were considered essential across all classes of society. Conditions for hiring a wet nurse were regulated by Shari'a law.

The bridal hairdressers: employed a labourer to work for them as an assistant helping them on the big wedding event.

The public women's baths professionals: were female fee collectors and bath attendants who were experts in exfoliation, washing and depilation. Their work required high levels of skill, especially as toxic material was sometimes used in beauty preparations.

The Ghasila: Just as beautifying women needed an expert, burial procedures and the treatment of women's bodies before their actual burial were also confided to a specialist, the Ghasila. Since people strongly cling to their religious practices and local customs in matters of death and burial, the washer was required to be particularly well-versed in both.

The dallala: acted as an intermediary between merchants and buyers by visiting women at home to sell them various goods, especially fabrics.

The mourners:  The female professional mourners were hired at funerals to praise the deceased and to perform wailing and lamentation acts. Even though wailing is banned by orthodox Islam, prompting caliphs and men of religion to condemn the female mourners' expressions of grief, such condemnation never stopped the female mourners from carrying on with their work. Khisrawan, or Khusruwan, was a famous professional mourner hired at the funeral of Al-Adel Al-Salar, vizier of the Fatimid Caliph Al-Zafir.

The religious scholars: came into direct contact with men. Numerous cases in history reveal male scholars stating that they received their knowledge from female scholars.

The market inspectors: Mention is made in the sources of a slave girl who walked the markets closing all wine shops at the end of the month of Jumada II, and warning people against the purchase of wine.

The textile industry workers: The vast majority of women, rich and poor, were spinning and weaving the whole time. It is interesting to note that a wealthy Fatimid princess by the name of Rashida "earned her living form spinning yarn". A remunerative occupation, spinning was the source of income for many widows, spinsters, divorcees and poor women. "The widow spins the yarn and takes it to the market in Fustat every Friday to sell it for 20 dirhems," read the sources. Moreover, women played an important role in the urban textile industry. Besides spinning, some women were engaged in embroidery while others became dressmakers (khayyata) and lace making ('aqqada). Although commercial weaving was largely a masculine occupation, we read in the Geniza documents that some women were engaged in the weaving and dying of silk.

The bakers: Women were also involved in bread production, either as suppliers of flour or bakers of bread (Khabbaza).

The brokers and traders: Wuhsha was a broker living in Frusta during the Fatimid period. The Geniza records reveal her involvement in very large business ventures, even extending beyond local markets. She invested her money in importing goods and became involved in commercial deals with an Indian trader.

The Arabic documents from Al-Quseir unearth interesting material on women and trade. They show that women seem to have played quite an active role in the business world and were involved in trade activities. One letter of a businesswoman involved in payment negotiations with the tax collector. Another letters contains a prayer for the wellbeing of a group of men and women, travelling with a trade caravan or a pilgrimage mission, or perhaps both.

Working women formed an integral part of the urban economy. In his book Safar Nama, Nasir Khusru mentions the interesting case of a woman of good entrepreneurial skills whom he met in Fatimid Cairo. The woman owned 5,000 metal pitchers that she used to loan out for one dirham a month each, on condition that it is given back with no damages.

A striking example of women's credit activities is "the female credit associations", a well-known practice through which several women pooled their financial resources together. A sum of money was collected from each participating woman every week and given to one of the participants as a large lump sum in alternating turns. The organising woman was known as al-Mar'ah al-Jama’ah (the collecting woman), and was in charge of managing the whole activity, giving the sum of money to each of the participants in her turn until the end of the term agreed to in advance. The collecting woman received a fee for her efforts. The saving activities of women bring them into the cash economy and correspond to the rotating saving associations found in contemporary societies.

Such economic activities of women are typical examples of what modern researchers and economists define as "penny capitalism". Surplus production, economic rationale and potential profitability, main factors of economic growth, are common among all the female workers and investors of the time.

Khonda Shakra, daughter of Sultan Al-Nasser Farag (1399-1421) was no typical princess. She was the endowment manager of their estate in Fayoum and many of her legal contracts are documented.

Primary sources during the Mamluke and Ottoman reigns reveal numerous cases of women filing legal complaints against their husbands, after the latter fail to return the money they borrowed from their wives. Also, in Ibn Taiymiyyah’s 14th century famous book Fatawi Al-Nisaa texts reveal that women were involved in buying and selling, as well as owning estates.

In short, women were out in the streets buying, selling, concluding partnership, lending money, renting properties and mixing liberally with men. They came into direct contact with the men in the market and conducted their work independently without any intermediary Wakil (agent). Their work and behaviour in the market was subject to the inspection of the Muhtasib (the market inspector) just as men's was. The interesting case of a female spinner who complained to the Muhtasib that a vendor sold her fake material to be used in bleaching her yarn depicts a scene where a woman, a man and a government official are involved in a business dispute. This record illustrates how both genders were in direct contact and liberally interacting in the same arena, for the same purpose: making money.