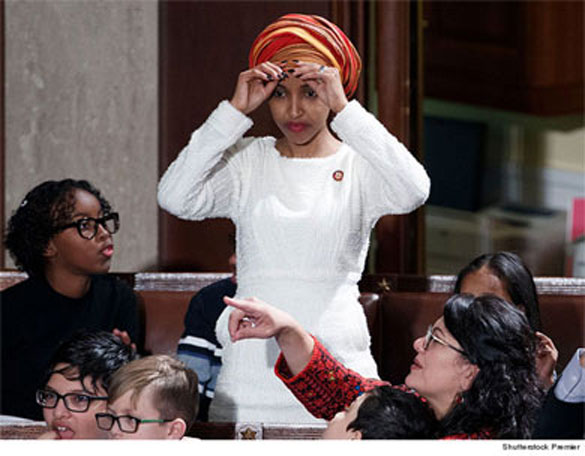 Democratic Representative Ilhan Omar straightens her Hijab before she is sworn into office on January 3, 2019. The House of Representatives lifted a 181-year ban on religious headwear to accommodate Omar, the first Somali-American member of Congress.

While women in some Muslim-majority countries are forced by governments to wear Hijabs and face torture or imprisonment if they violate that official ordinance, much of the Western world will be celebrating "World Hijab Day." Founded by Nazma Khan, who claims she was harassed for wearing a Hijab in New York, the annual event began in 2013.

The event takes place on February 1 every year, in many countries worldwide, in order "to encourage women of all religions and backgrounds to wear and experience the Hijab."

According to Asra Nomani, co-founder of the Muslim Reform Movement, the Hijab is used by Islamists to enforce their ideology and an expression of an honor-shame social system at odds with U.S. notions of liberty. Islamists like Linda Sarsour claim that the Hijab is a means of women's empowerment.

I interviewed six American women from the Middle East and North Africa who live in the Greater Chicago area and have each experienced the Hijab in different ways. Each spoke on the condition of anonymity. They range in age between 23 and 57. I have given them aliases to identify them.

"Nadia," a 23-year-old Sunni Muslim, is divorced and hails from Morocco. Nadia says:

I wore the Hijab in Morocco, because a woman without a headscarf there is considered to be immoral. In Islam, women's bodies are awrah [shame]. So, they must cover up, unlike men. Also, I wore the Hijab, because it was imposed on me by my husband in Morocco.

Nadia's friend and roommate "Salima" is 49 and also Moroccan. When Nadia added that she had removed the Hijab because she was not convinced of its importance and because it was imposed on her by her ex-husband, Salima commented curtly, "Hijab is a shroud a Muslim woman is forced to wear alive, until they put on her shrouds when she is dead."

"Fatima" is a 47-year-old Shiite and refugee from Iran. In her teenage years, she was married off to a cousin and is now divorced. Fatima said:

The Iranian government forces women to wear the veil, even though most girls reject it. However, we cannot protest, because we would face imprisonment, or may be killed. There is a lot of torture in prison[.] ... So, we have to accept the Hijab and keep our mouths shut. 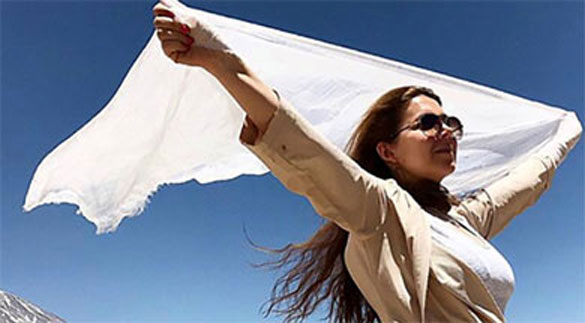 Iranian authorities sentenced Shapark Shajarizadeh to 20 years in prison for removing her headscarf and waving it around on a stick during a December 2017 protest.

While in Iran the Hijab is enforced by the government, in other countries it's primarily enforced by community and family networks. "Khadija" is 33 and a former Sunni Muslim from Jordan. Even in her country of origin, she was a rebel for refusing to wear the Hijab. Khadija commented:

The headscarf is imposed on girls by parents and relatives in Jordan. But my family gave me the freedom to wear any kind of clothes, unlike all other parents. In most Jordanian families it is compulsory for girls, from the age of 6 years.

She says some families are willing to use violence to impose the Hijab:

Some parents use violence with their children. like a friend of mine. Her mother forced her to wear the Hijab since the age of nine. She had to go to school wearing the Hijab, but removed it there. Her brother discovered that, beat her severely, and her family prevented her from going to school for good.

"Aisha" is 26, a Sunni, and came from Iraq at the age of 13 as a refugee. She agrees that families are often the most significant pressure to wear the Hijab. She notes:

I was forced to wear the Hijab by my mother at an early age. She removed me from school, just in order to prevent me from seeing any male classmates. Later, my mother married me off at the age of 14 to an Iraqi American 25 years my senior.

"Mariam," 57, is Lebanese and removed her Hijab in 2000. She says social pressure from the broader community played a role in her decision to wear the Hijab:

My three sisters and I put on the Hijab, in Lebanon, after my eldest brother died suddenly at the age of 48. Then my father died after six months. Everyone was saying that we will go to hell if we did not put on the Hijab.

One argument made by Islamists is that the enforced modesty of the Hijab prevents sexual harassment of women by men. But all of the women I spoke to reject this argument.

Nadia said, "Sexual harassment is common in Morocco, with or without the Hijab." Fatima agreed, saying, "It is common in Iran, too. The Hijab does not prevent it."

Mariam noted that sexual harassment in Lebanon is minimal but added that her aunt and female cousins who live in Saudi Arabia suffered from it, even during performing the pilgrimage rituals in Mecca.

I asked why they chose to take the Hijab off and how it felt when they were wearing it.

Aisha answered, "I felt like garbage in the Hijab and the baggy dress I was forced to wear. It was like wearing a bag. And a bag is for garbage. When I turned 21, I was able to get out of my mother's control, removed the Hijab, and divorced that man. Then I felt like a real woman. I became free. I love wearing clothes that reflect my beauty and femininity."

Mariam said she felt the Hijab made her feel "backwards" and was more a political symbol, representing the influence of Islamist movements like the Muslim Brotherhood and the Iranian revolution in 1979. She says, "I hated the Hijab. I felt that it put limitations on me. I removed it before coming to America. I hate the Hijab. I felt backward then. Very few women wore the Hijab in Lebanon in the 1970s."

Khadija says she came to the U.S, "drawn by the freedom of faith, speech, and the other liberties Americans enjoy."

While real Muslim women express their appreciation for a country where they can refuse to wear the Hijab without fear, there is growing concern that that freedom is being eroded. Indeed, Islamists have transformed some neighborhoods in the West like Dearborn, Michigan and the south suburbs of Chicago, Illinois, into enclaves where women who do not wear the Hijab are shamed and ostracized. Muslim women are subjected to such pressure from Islamist organizations and some mosques in the West. And there remains an organized campaign to not only impose the same social pressure for the Hijab, but to make it appear as a sign of freedom.

A Palestinian Muslim woman who lives in the southern suburbs of Chicago said, "women in the Palestinian Territories have more freedom to choose whether to cover or not, than women who live in those Chicago suburbs."

None of the women I talked to saw the Hijab as freeing.

Nomani says we have to see the Hijab as part of a larger ideology,: "We have to be smart about the ideology that is putting this idea into the world that a woman must be defined by her idea of modesty, that she is the vessel for honour in a community...."

Americans need to not be duped by Islamists who are using the annual Hijab Day as a ploy to promote their Islamist ideology and gain power over American Muslim communities. Journalists need to do the hard work of speaking to Muslim women who reject the Hijab, and not just Islamist Hijab-promoters. And we have to advocate for these women, persecuted for rejecting the Hijab in Muslim-majority countries.