Although this is the year 2014, the security and legal safety nets for women worldwide, and especially in most of the Middle East, Africa, South Asia and particularly Islamic societies, resemble something out of the Dark Ages.

It's bad enough when an Afghan Taliban commander straps an explosives vest to his innocent 9-year-old sister, whose family wants her back after the police detained her, but it's also grossly misogynistic and regressive for the resident of the Maldives to veto a bill criminalizing marital rape. 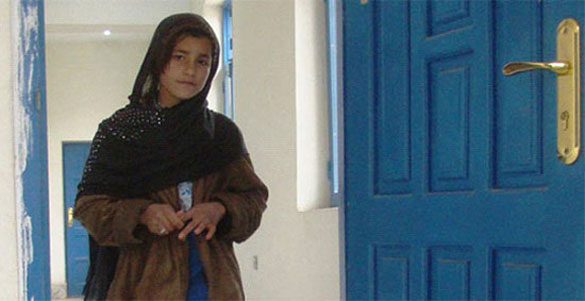 We all know that the moment this 9-year-old Afghan child is returned to her family in Helmand province (still to be decided), she will be in a life-threatening environment. The Taliban have issued a statement denying that they dispatched a girl for a suicide mission. But, human rights organizations say that occasionally the Taliban do not hesitate to use children in their operations, although they typically use boys.

But the critical issues are the past patterns and trends of the Taliban's use of children, boys or girls, in their violent missions, as well as what will happen to Spozhmai, the young girl currently in the headlines. In media interviews, she has said she fears returning home, because she is certain that her family will make her wear a suicide vest again. Presently, she is in protective custody, and Afghan President Hamid Karzai has condemned the Taliban's actions, referring to this heinous act as “un-Islamic.” The girl's father is under arrest, and police are looking for her brother, the Taliban commander. The young girl's protection should be the top priority of the authorities. Helmand province is one of the most conservative regions of the country. It has a track record of being unkind, to say the least, in its treatment of girls and women.

Concerning the Maldives, clearly President Abdulla Yameen does not see any harm in sexual coercion by a husband toward his wife; in laymen's terms, that translates into rape.

For the benefit of President Yameen, here's an official definition of rape: “The crime of forcing another person to submit to sex acts, especially sexual intercourse” and “any act of sexual intercourse that is forced upon a person,” which unequivocally means “without consent.” Believe it or not, this can -- and does -- happen in and outside of marriage.

According to the Washington Post (Jan. 16, 2014), the Maldivian parliament “voted 67-2 last month to limit a husband's right to have non-consensual sex with his wife. The bill says a husband cannot force his wife to have sex if the couple has filed for divorce, dissolution or mutual separation, and if the intent is to transmit a sexual disease. Yameen vetoed the bill about a week after the vice president of the Maldives Fiqh Academy, Mohamed Iyaz Abdul Latheef, criticized its passage saying the Quran and the Sunnah, or the teachings of Islam, do not give a wife the authority to deny sex to her husband.”

How very convenient, Mr. Abdul Latheef. Those of us in the 21st century translate that as rape. And, Mr. Latheef is doing no favours to the image of Islam globally. In other words, Mr. Latheef's interpretation of Islamic principles renders the woman (i.e., wife) absolutely no rights pertaining to marital sex. Of course, he is 100 percent wrong. Unless Mr. Latheef and his kind wish to declare, then, that their interpretation of Islam affords no human rights to women. He and his lot try hard to present an image of an Islam that has it both ways: That it's just and equitable when it comes to gender rights and freedoms, yet they are adamant about Islam mandating the “obedience” of women to men. Take a look at his quotes:

The Maldives seem to lean increasingly towards a “Talibanisation” of society, thanks to the likes of Mr. Latheef and his “Fiqh Academy” (Fiqh is Islamic jurisprudence). Last year, the Maldives juvenile court “sentenced a 15-year-old girl -- who was raped by her stepfather -- to 100 lashes on charges of fornication.” The court overturned it as a result of international outcry and pressures.

Clearly, the Islamist misogynists like the Fiqh Academy and juvenile court judge need education and training in recognizing what exactly is rape, and who is responsible and criminally accountable in rape cases.

Far too many Islamic societies distort the definition of rape in favour of men, thanks to twisted, illogical and misogynistic provisions in Islamic law pertaining to adultery and fornication. Most of the women in Afghan prisons are there due to “moral transgressions,” rather than real hard crimes. This is a statistical fact based on research (see Canadian Women for Women in Afghanistan: http://www.cw4wafghan.ca/RuleOfLaw). Too many victims of rape in Afghanistan, Pakistan and a number of Islamic societies worldwide, get punished and in some cases even forced to marry their rapists, instead of punishing the rapist himself. More often than not, the men who are the real culprits in such cases get away with rape and assaults. President Yameen's veto is not helping progress in the fight against religiously sanctioned misogyny. Such mentalities and policies only take society countless steps backward, regressing centuries behind the 21st century. Progress is in a dusty coffin.