My Body, My Choice: Violated and Brutalized Pakistani Women 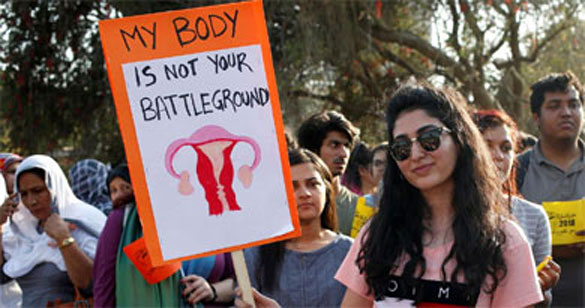 International Women’s day (IWD) since the past few years in this part of the world has suddenly become highly sensitized and with a plethora of debates triggering volatile dispute. The slogan this year which caused a greater dialogue, over many issues, to be demanded amongst women’s rights was “MeraJism, Meri Marzi” (My Body, My Choice). This slogan chanted (on one of the marches via the Aurat March platform) was a topic which was adapted by something that was originally meant for another cause abroad. There is nothing wrong with adopting a western ideology or idea. However, one must perhaps look into our own history to see what we had and what we have lost along the way.

Globally, women’s march is much more than just and only that. The topic, which was one of many, seemed to take precedence over International Women’s day (IWD) here was only because it was made so. Aurat March (Women’s March) seemed triggering to several however a greater cause was the idea and was slightly side-lined at points. News stories by papers only sensationalizing two characters who had a fight with abuse hurled onscreen was only side tracking the issues at hand. That was just another drama being enacted one felt by both sides (and the result was an increase in following on social media overnight (for both).

To the men, International Women’s Day march as a concept in itself was not meant to be a competition or to trigger sensitivities. Faith as well as the state had originally provided many rights, but these rights were taken away over time, which is why the women wanted that right and the choices back; much of which was already originally given.

For those women who took out one example of something occurred and cried out that men are trash or used vulgarity and profanity to prove their points, or to motivate the nation to free themselves from their families, that’s where the people of the nation had the problem. There were several who marched for other reasons which were political and with deeper agendas and that must be openly stated with sensibility and balance.

On no account will I support an anti-state narrative which equated a women’s rights movement to a taking apart a government in order to create disunity amongst the nation; pitting women against men, or even families against each other. That was an only a distraction and saddening to see that people fell for the antics that led to an onscreen drama which was enacted to create ratings.

On another note, any extremity in anything is unhealthy. A middle ground in all things must be chosen. It is the middle path that will succeed, and it is on common ground, in all things, where we will find progress and never falter for a greater conversation and more understanding to take place.

To the men and women both who opposed any of the Women’s marches (please note, there were several marching from different platforms, not just one); the rights to equality should not have had to be asked for in the first place. They should’ve have been given. They were for you, your mothers, your daughters, your sisters, and even your wives, and yes even men and children to live in a secure world without harassment and without disrespect but living holding value, so one could see progression-together- as one nation. They were so the next generation would never have to face the hindrances and the angst which the previous one have had.

In the words of our founding father, Muhammad Ali Jinnah “No nation can rise to the height of glory unless your women are side by side with you. We are victims of evil customs. It is a crime against humanity that our women are shut up within the four walls of the houses as prisoners. There is no sanction anywhere for the deplorable condition in which our women have to live.” (Quaid-e-Azam, Muhammad Ali Jinnah).

These words were spoken decades ago by the founding father of Pakistan, a man who already had the foresight to know that the world is a better place and the nation a progressive nation with both genders supporting each other.

The theme for International Women’s Day itself across the globe was #eachforequal this year. In Pakistan, there were some wonderful placards present in our country and several that were held up by men present there, that were pretty commendable. A few of my favourites, “Men of quality are not scared of equality”, and “I March, because my daughters won’t have to”.

Our founding fathers and even the women who supported them (equally) to build this nation had it down correctly. We must rise as a nation together; towards a greater purpose. The absence of either one is simply not progression. It is when we are together in support in every field of life, therein lies our victory.

Original Headline: My Body, My Choice, (my right to an opinion)