Legal Islamic Theorists and Jurists (Fuqaha) From the Hanafi, Shaf’ai and Maliki Schools Have Divergent Opinions on the Age of Marriageability for Muslim Girls 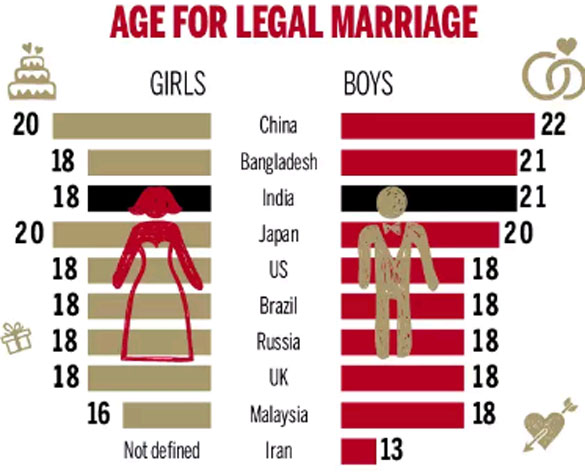 Amid the bill to amend and increase the minimum legal marriageable age for girls from 18 to 21, which would affect marriage acts of Muslims, Christians and other religious communities in particular, modifying the faith-based personal laws on marriage and inheritance, the Samastha Kerala Jamait-ul-Ulema, an organisation of Sunni scholars, and many other Islamic bodies in Kerala have opposed the move.

Muslim League leader E T Mohammad Basheer has introduced an adjournment motion in the Lok Sabha which states that "the decision was against Muslim personal law and it was another step towards introducing a uniform civil code in the country."

Tellingly, even the women’s wing of the League has opposed the decision saying delaying the age of marriage will give way to “live-in relationships and illegitimate relations”. On the other hand, the

Union Cabinet has cleared the proposal in its meeting. According to the news reports, the government plans to bring the bill — which will bring the minimum age of marriage for women at par with that of men — in the ongoing winter session of Parliament.

The Kerala-based body, Samastha Jamait-ul-Ulema is primarily a Sunni-Shafi'i school of thought in terms of fiqh or Islamic jurisprudence and legal system. A conglomeration of prominent local Sunni-Shafi'i jurists and legal Islamic experts such as P. K. Muhammad Musliyar, the Samastha emerged in the aftermath of the Mappila Uprising as a response to the Salafist movement in Kerala in 1921.

Legal Islamic theorists and jurists (Fuqaha) from the Hanafi, Shaf’ai and Maliki schools have divergent opinions on the age of marriageability for Muslim girls keeping in view the physical and other complications. Going by their legal rationality (illah sharia), geographical conditions of different societies and socio-cultural evolutions have to be taken into consideration.

In order to critically analyse the ‘marriageable age’ under the Islamic jurisprudence or Fiqh Law, it's advisable to apply ‘historicism’ or historical methodology to better understand and appreciate the different legal opinions (Fiqhi ray’) of the Islamic theologians. All the four established schools of Islamic Jurisprudence recognise the fact that the age of the marriage for girls, especially consummation, must be postponed until they reach maturity (Aql) and not just ‘Bulugh’ (puberty). Not just Sunni Hanafi traditionalists, even many modernist Shi’a theologians would follow this rational approach which is in sync with the Qur'anic injunctions on marriage.

As a matter of fact, there are no age limits fixed by the Qur’an for the girls’ marriage. In the mediaeval times, Muslim marriages were mostly based on the customary practices in the Arab and non-Arab societies. The operational part of the related Qur’anic verses on the marriageability is that Allah has exhorted the laws for babies (الاطفال) which are diametrically different from teenagers who reach their puberty (Bulugh) and an altogether different laws for those reaching of the "age of marriage" (حتى اذا بلغوا النكاح) as clearly stated in the below mentioned verse:

“Test the orphans [children] until they reach the age of marriage, and then if you find them mature of mind hand over to them their property” (Qur’an 4:6)

Notice the Arabic word “Balaghu” (بلغوا). It clearly means “when they have reached the age of marriage”. This implies that they have to go through gradual physical, psychological and mental stages, growing up in years. And they should be approached for their affairs like marriage and property ownership after their proper mental development so they could determine what is the best for them. These days, whether a girl or a boy, becomes capable of managing their own affairs only after at least their graduation which is generally completed at 20/21.

From the above verse in Qur’an, one this is for patently clear: One must reach “full physical strength and mental growth” (Ashuddahu) in adulthood and then only can reach "the age of marriage" (Qur’an 4:6). Qur’anic terminology of “Ashuddah” entails meanings including both maturity and puberty, divine wisdom and worldly knowledge, material accomplishment and spiritual ripening, adulthood and pubescence as detailed in the Qur’anic philology. Further to this point, the following verses also give specific details which substantiate it: Female-children would later be considered "Fataaya" (young ladies) only when they are ready to be "wed" (4:25) and thus one is not permitted to get "Atfaal" (young children) married (4:25, 24:59).

An Arabic proverb often used in the Prophetic traditions reveals the same. The Holy Prophet (pbuh) issued his advice to youth for marriage in these words: "O Shabab! (young grown-ups) (يا معشر الشباب). But in a sheer ignorance of all these nuances in hadith and Qur’an, literalists among Salafis and Sunnis, and sometimes Shi’as, would ask the run-of-the-mill question: So what about Prophet Muhammad's marriage with the then 9-year old Haz. Aisha r.a? Ironically, such questions emerge from highly textualist interpretations of the Qur’an and Hadith heavily influenced by the Hanbali aka Salafist Manhaj (methodology). They have caused ripples among Muslims and non-Muslims about Islam and modern developments which directly impact the issues like marriageability of Muslim girls in India's rural areas where non-Muslim girls are equally married off at early ages.

While the self-evident verses in the Qur’an declare “maturity” and not just “puberty” as minimum natural requirement for marriageability of girls, misleading interpretations of "reaching the age of puberty" still exist in the community. While Salafists and many Sunnis in general favour a literalist interpretation of “Ashuddah” and “Bulugh” merely as ‘puberty’, modernist Qur’an exegesis have defined puberty as ‘maturity’.

Sunni theologians like Maulana Inayatullah Subhani, author of acclaimed books on Islamic Law like Haqeeqat-e-Rajm, Javed Ahmad Ghamidi, a reformist thinker and Shia theologians like Ayatollah Khomeini are some those who define girls’ maturity as 'ability to manage affairs’, fulfil responsibility of motherhood and appropriateness in social behaviour'. However, these are among the rarest of rare established Islamic theologians who have challenged the organised clergy who are at the loggerheads. But at the same time, as a critical-traditionalist Sunni Hanafi scholar, Maulana Waris Mazhari points out, they too indulge in the ‘Muslim apologia’ in their rebuttals to the textualist position on the controversial hadith which reports that Hazrat Aisha r.a. was married to the Prophet (pbuh) at the age of 6, 9 or 11.

The full hadith as reported here from Imam Bukhari’s collection is the main corpus from which all Sunni sects derive legitimacy for marriageability of girls at the minimum age of 9. It says: “Prophet married Aysha when she was 6 years old and he consummated his marriage when she was 9” (Bukhari, 64-65, 88). A similar hadith report says that Prophet’s marriage with Aisha was consummated when she was 11. Fundamentalist Islamist preachers like Zakir Naik quoted the same hadith to argue that even today “a Muslim girl’s marriage can occur at age of 11/12.” One can only be aghast at this dangerous Sunni-Salafist literalism.

In India, the marriageable age for girls, especially for the minorities is a complex issue in the multicultural and multi-racial miliue, due to its strong association with the patriarchal family values, religious biases of both the majority and minority communities. As consequence of this, the government’s ammendment of the marriageable age is bound to face criticism. Besides the legal implications of enforcing age of marriage, a large section of the traditionalist religious leaders and clergymen, citing the socio-religious justifications behind the early ages of girls for marriage, will arise against the amendment across religions. But the modernist and progressive theologians of all faith traditions including the four Islamic schools will apparently approve of the move. Barring a few who fear that this will put the independence of adolescent girls at stake, almost all of them are likely to applaud the move. Notably, the Kerala Catholic Bishops Council (KCBC), an apex body of Christians, has lauded the decision to bring uniformity in the marriageable age of men and women. “We feel education remains a key factor and by 21, women will get an opportunity to complete their graduation. This will pave the way for a mature relationship and healthy family. Therefore, we view the decision positively,” said KCBC family commission secretary Father Paul Simenthy. This statement should serve as a logical explainer for the theologians and legal experts of Islam as well.

In India, it should be noted, Personal Laws govern marriage and other practices for religious communities. These prescribe certain criteria for marriage, including the age of bride and groom. For example, Section 5 (iii) of The Hindu Marriage Act, 1955, sets a minimum age of 18 for the bride and 21 for the groom. This is the same for Christians under the Indian Christian Marriage Act, 1872. But for Muslims, the criteria is attaining puberty, which is assumed when the bride or groom turns 15.

Ghulam Rasool Dehlvi is a scholar of classical Islamic studies, cultural analyst, researcher in media and communication studies and regular columnist with newageislam.com