Hussaini‘s story was an extremely pathetic one. Born in 1967, she hails from the Northern Nigeria. Though a divorced mother of four, she became pregnant for a man, Yakubu Abubakar about 13 years ago and eventually gave birth to a girl, Adama in Sokoto, a state operating the Sharia law. 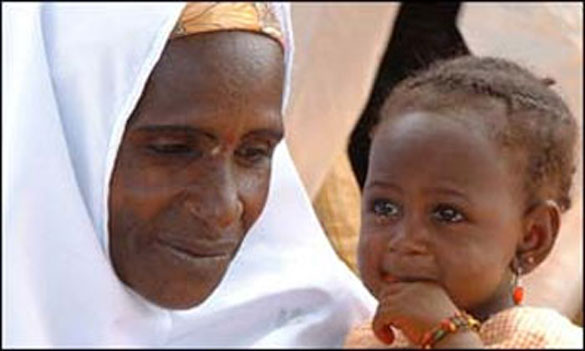 According to Hussaini’s account published in the Bar Perspectives, a 2002 newsletter of the Nigerian Bar Association (NBA), ‘’ my case started when some informants told the police that I, Safiya, a divorcee, was pregnant, without husband and ‘’fingered one Yakubu Abubakar, a married man, in the same village, as being responsible for the pregnancy. ‘’

Although Hussaini was reported to have claimed that she was a victim of repeated rape by a man, whom the Sharia court found not guilty due to lack of sufficient evidence, it suffices to recall that during her trial, Hussaini had no legal representation and she was not conscious of her constitutional rights.

Interestingly, for the State to establish this crime against her, four eye-witnesses to the alleged offence of Zina (illicit sex) ought to have been produced according to the writings of the Islamic scholars and Maliki jurists such as Ibn Rushd.

This requirement was not complied with, yet an Upper Sharia Court in Gwadabawa, Sokoto in suit No: USC/GW/CR/ TR/O10/011 charged Hussaini with adultery. The Sharia court dismissed her testimony, convicted her on October12, 2001 and accordingly sentenced her to death by stoning at the hands of men.

The trial judge, Muhammed Bello Seyinnal, said that the convict confessed to committing adultery, an offence punishable by stoning to death based on Islamic law.

The judge said his judgement was based purely on Islamic jurisprudence. He ruled that since Hussaini was an expectant mother, the sentence would take effect after she delivered and weaned the child.

On hearing this pronouncement, she went into hiding. She did that to avoid being apprehended by the Hisbah corps.

The verdict was criticised by several human rights groups and global bodies. For instance, there were calls from Amnesty International (AI) and other interest groups that wrote petitions and campaigned vigorously against the judgement.

AI and Baobab for Women’s Human Rights also criticised the verdict and urged the Sharia Court of Appeal of Sokoto State to set aside as soon as Hussaini’s appeal against her sentence was brought before the court.

In a statement she said “it was a thorough embarrassment” to majority of Nigerian Muslims. The group argued that the judgement was wrong because Hussaini was accused of adultery instead of fornication, since she was a divorcee. Again, four witnesses stipulated by the Islamic law were not available at the trial. The verdict was passed because she comes from an under-privileged class, the organisation argued.

While describing the verdict as “gender discrimination of the highest order,” the group called on the then state Governor Attahiru Bafarawa to intervene to save Husaini’s life. The then Justice Minister and Attorney-General of the Federation, Chief Bola Ige, had also said the Federal Government (FG) would not fold its hands and watch Husaini stoned to death. He promised that the FG would challenge the sentence passed by the Sharia court.

Just as a number of Nigerian journalists joined the world in criticisms of the verdict, another writer, Chikodi Okerecha, in an on-line article, had also justified why Hussaini should not die.

Hussaini appealed and a legal team of 10 led by a female human rights attorney, Hauwa Ibrahim, represented her. 15 issues raised on appeal, among others, were, if confession is conclusive proof of adultery and if Husaini was aware of a provision of both the 1999 Constitution and the Sharia Penal Code Law of Sokoto State and if she understood the nature of the alleged offence.

Ibrahim argued that the convict’s former husband was the father of her one year- old daughter, Adama and that the village woman made her original statement under duress. Further, they said the alleged act of adultery had taken place before the Sharia law was implemented in the state. Full Sharia law was established in Sokoto in June 2000, a month after baby Adama was conceived.

The Sharia Court of Appeal in Sokoto, in its judgement on March 25, 2002, quashed the verdict. Hussaini won her appeal and she was discharged and acquitted.

The Sharia appellate court held that the death sentence, originally handed down by the Islamic Sharia court was baseless. Besides, it declared that the adultery provisions of Sokoto’s Sharia law could not be used against her, as the alleged adultery had taken place before the introduction of Sharia law in Sokoto.

Hussaini’s lawyer was also reputed to have successfully defended another woman, Amina Lawal in the North who was sentenced to death by stoning for adultery in 2002.

Be that as it may, another lawyer, Mr. Sanusi Lamido Sanusi, writing on Hussaini’s post-conviction analysis in an article titled : ‘‘The Adulteress’ Dairy’’ published in the NBA quarterly newsletter 2002 had declared that ‘’ the interesting point to note is that stoning to death as punishment for adultery, is not mentioned in the Qu’ran.’’

While there appears to be merit in this position, reference can also be made to the Biblical injunction when the Jews wanted to stone a harlot. Lord Jesus challenged them ‘’Let he among you who is without sin, cast the first stone.’’. All the accusers quietly went away.