Passionate Debate Erupts Over the Future for Women in Islam

The future for women in Islam is hotly contested, and bound to cause violent arguments for years to come, judging from an explosive debate between four powerful Muslim women, and one celebrated Muslim reformer — human rights activist Ayaan Hirsi Ali — at the Women in the World New York summit on Thursday.

Beginning with the opening question by Indian moderator Barkha Dutt, the sparks flew: “Why are you picking only on Islam?” was Dutt’s provocative prompt to Hirsi Ali, author of Heretic. The Somali-born, Dutch-American academic, who lives under Fatwas for her condemnation of Sharia law, faced off with a fellow Somali, women’s activist and Sharia-defender Hibaaq Osman, who continued the fiery exchange offstage.

The debate remained tense but civil before the audience. “I embrace Muslims but I reject Islamic law because it’s totalitarian, because it’s bigoted and especially bigoted against women,” Hirsi Ali insisted in her opening remarks.

“When its law becomes the law of the land, you have a male guardian, child marriage…you will be disinherited and if you are raped it’s your fault, and you will get stoned to death. I reject Islamic law because it is inherently hostile to women.”

To wild applause from the packed Lincoln Centre theatre, Hirsi Ali added: “We will not defeat and we will not eradicate these practices unless we talk about the principle, and the principle is enshrined in the Islamic law of Sharia.”

That didn’t satisfy the moderator, Barkha Dutt, who retorted: “Isn’t religion inherently misogynistic? To me coming from a so-called third world country, I find it shocking that America debates abortion.” 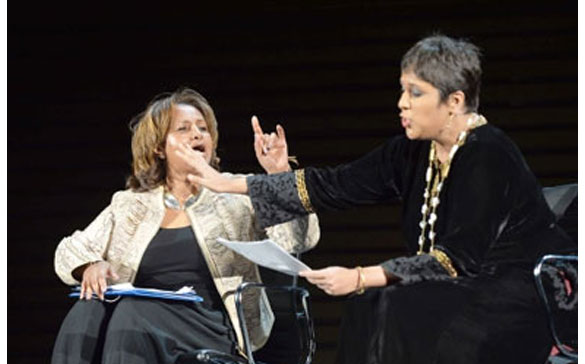 Hirsi Ali quickly jumped in to agree that misogyny is common to all religions, but made a case for tackling Islam, the subject at hand: “Please keep the topic because we only have thirty minutes”.

For Zahra’ Langhi, co-founder and director of the Libyan Women’s Platform for Peace, a key problem is the tendency to resort to what she called reductionist and simplistic views of Sharia, and the belief that Islam is inherently misogynist.

“There’s no such thing as Islamic law – there’s something called Sharia. It’s the dynamic process–it has to be contextualized.”

“They think it is a set law, whereas Sharia has developed over time and space. It has no set position on divorce and marriage and that explains why we have diverse schools of legal thought.”

Hirsi Ali did not relent, and decried the “betrayal of Muslim women” who have an education and have been able to emancipate themselves from Islamic law, then insist that Islamic law “is not what it is and we don’t understand it.”

In the information age, she said, it is possible to see what Islamic law looks like for women. In Saudia Arabia, for example, women are not allowed to drive, and are “subjected to every humiliation you can think of.” The same was true in Iran, under Ayatollah Khomeini, who reduced the age of marriage to 9, Hirsi Ali noted. 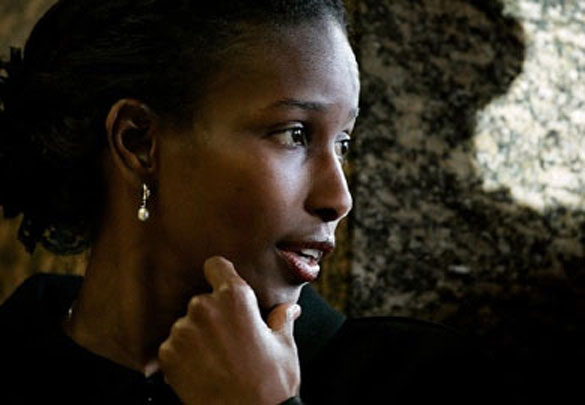 Ayaan Hirsi Ali draws a distinction between Islam as a doctrine and Muslims.

This perceived “insult” to the Prophet prompted a visceral reaction from Osman, who began shouting and gesturing that Hirsi Ali “did not make sense.”

“You said we have to go to war with Islam. That was shocking … the fact you said we have to defeat Islam militarily — you surrendered your credibility. I am surprised you are saying those things. Those who claim to be able to reform society have to be in that society.”

Hirsi Ali held her ground, and the unintelligible shouting of the panel members only subsided after the intervention of moderator Dutt, who grabbed the arm of Osman, sitting next to her, and turned to the audience to remark: “None of these women are oppressed by their religion.”

Farah Pandith, Indian-born American and a former State Department official who is an adjunct senior fellow at the Council on Foreign Relations, agreed there is great diversity in Islam, saying the religion is “not a monolith.”

“When you travel and talk to Muslim youth, you hear many different voices about what it means to be a woman. Muslim millennial do not want to be pigeonholed as one thing. It is important that this audience understands and respects diversity for Islam,” she stressed.

“There are a billion Muslims under the age of 30… and for them it is critical we don’t politicize their population.”

Pandith said many young Muslim women and men are pushing back against the ideology of the Islamic State and other “non-state actors” who are using the name of Islam “to manipulate religion.”

She said that, in her work, she “saw vibrant young diverse Muslim millennial females — they do not want to be held back by discourse in the media, by a victim mentality. They want to tell their own stories. Twenty and thirty something… are taking back the narrative about what it means to be a moderate or female Muslim and what it means to unpack that in a global modern era, as a digital native…”

For Pandith, the expression of identity meant many things. “It is not just whether you’re veiling or not.”

Pressed on her incendiary comments about Islam being a “nihilistic cult of death,” Hirsi Ali responded that she had always made a distinction between Islam as a doctrine and Muslim believers.

In her latest book, Heretic, she writes about a growing number of Muslims who reject some of the most basic doctrine of the religion from the inside, and are fighting for women’s rights.

“That is not to declare a war on Muslims. I embrace Muslims. I reject everything that is Islamic law.”

Yet the argument for Muslim reform angered panellists Langhi and Osman.

“You have to be informed as to what Islam is, and it is not monolithic,” said Langhi.

“What we need to reform is Muslim minds — Muslim’s interpretations, not Islam. That’s a big difference.”

Osman refused to counter the demand for internal reform, insisting there was nothing Islamic about the Islamic State, and that Islam “rejects killing innocent people.” In her view, human rights do not supercede religious rights. “No, absolutely not, Islam gives you all the rights of the women you need,” she said to loud gasps from the audience.

Hirsi Ali returned to the growing number of reformist Muslims who are no longer willing to lay the blame for their “internal philosophical affairs on the Zionists or the American media”.

“They understand they need to compete with the Islamists…and they are pushing back. We need to acknowledge their fight, which is a dangerous fight…The people who disagree with you, they want to kill you — they want to kill me. I don’t want to kill them. The power of the word is going to win, but we have to protect that freedom of speech from allegations of Islamophobia, from silencing people and, ultimately, from violence”.