I Am Ashamed That Ireland's Medieval Abortion Law Still Stands

In beautiful Galway, my home town, Savita Halappanavar died in the hospital I was born in after being denied a potentially life-saving abortion. She presented with back pain, and was found to be miscarrying. A day of agony later, knowing her pregnancy couldn't survive, she asked for a termination, but was refused. "This is a Catholic country," she was allegedly told. 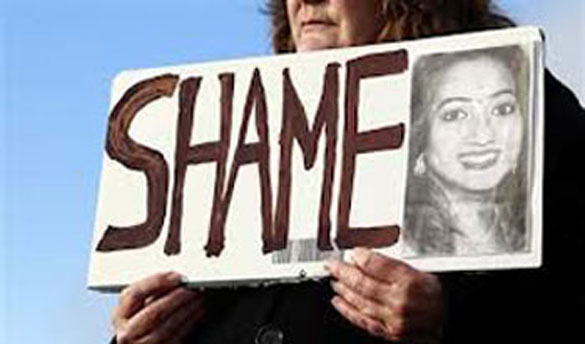 As long as the foetal heart kept beating doctors would not grant her wish. It beat for three days. Halappanavar vomited, shook and collapsed. On the third day the weak sound faded to nothing and doctors removed the dead foetus. A week after she was first admitted to hospital, Halappanavar died of septicaemia.

This is a Catholic country. If these were indeed the words used by the doctors, then the hospital did not feel the need to sugar coat its rationale with references to Halappanavar's psychological health, or the wellbeing of her foetus. Its ideology was not veiled – as Youth Defence, Precious Life and Ireland's other powerful anti-abortion lobbyists have learned to do – in the language of care and concern for women. The rationale was not cloaked in academic arguments about the moment when human life begins.

Halappanavar objected that she was neither Irish nor a Catholic: a futile attempt to appeal for choice over what was happening to her body. As a medical professional, she most likely knew that her 17-week-old foetus would not be conscious of its existence ending. But her appeal to value her life over an insentient foetus's heartbeat was ignored. There is no abortion on the pope's own island and she had no time to get to England.

I am no longer a Catholic, so I need to look for earthly explanations as to what happened to Halappanavar. The medical technology to prevent this painful, senseless death was at hand. Yet doctors did not use it. Why? One could argue that they had to obey Irish law. In The Origins of Totalitarianism, speaking of defences mounted by the perpetrators of atrocities during the Holocaust, Hannah Arendt says that adult citizens cannot obey. Children and animals can obey, but adults have the capacity to morally assess the actions that their socio political systems demand of them.

Adults do not obey, they consent. And yes, the system might punish you for failing to carry out its evil will – for choosing to remove a dying, insensate foetus from the womb of a woman in agony who is begging you to do so – but fear of consequence does not absolve you. To those doctors who continued to check for a heartbeat as Halappanavar deteriorated, this is also your fault.

I know what it's like to try to speak out against anti-choice hegemony in Ireland. I know how hard it is to even form pro-choice opinions at all. Like 95% of people schooled in Ireland, I had a Catholic education and was heavily propagandised against abortion. More, I had to navigate the biased information offered by the Irish press. RTÉ, our national broadcaster, did not even report on a 2,000-strong pro-choice march in Dublin earlier this year, while it continues to cover anti-abortion movements in the provinces. Teachers and journalists, this is your fault too.

Of course, this is made difficult in a country in which the entire political system, against the will of the electorate, enforces medieval attitudes to abortion. In 1992 the Supreme Court ruled that a suicidal teenage rape victim had the right to an abortion. In the referendum that followed, Irish people voted to uphold this judgment. Yet, 20 years later, no government has been brave enough to legislate. In 2010 the European court of human rights ruled against the Irish state in favour of a woman who had to travel to the UK to terminate a pregnancy while undergoing chemotherapy. Still Enda Kenny, our devoutly Catholic taoiseach, has said that abortion is "not of priority" for his government. Kenny, James Reilly, the health minister, and every other Dáil member – this is your fault too. You are responsible for the pain Halappanavar's loved ones are going through.

To her family, I want to say: I am ashamed, I am culpable, and I am sorry. For every letter to my local politician I didn't write, for every protest I didn't join, for keeping quiet about abortion rights in the company of conservative relations and friends, for becoming complacent, for thinking that Ireland was changing, for not working hard enough to secure that change, for failing to create a society in which your wife, your daughter, your sister was able to access the care that she needed: I am sorry. You must think that we are barbarians.