Palestinian Women – One for All, All for One 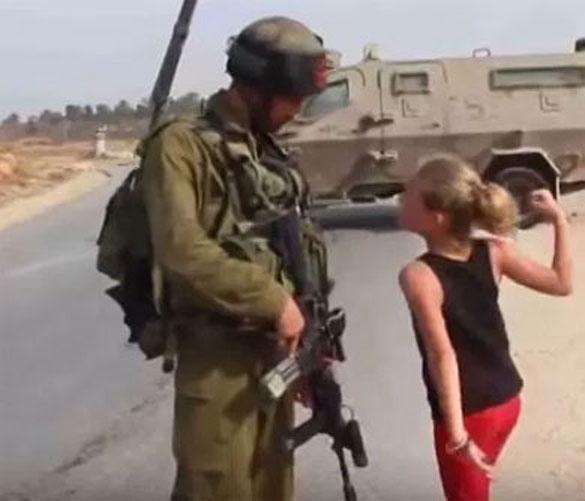 “Palestinian women have always stood side by side with their fathers, brothers, husbands, comrades to resist the Zionist occupation, to fight for freedom and legitimate rights. They are the first to go to the streets to protest the brutality of the Israeli military occupation, the first to organize sit-ins and marches demanding the release of their children, brothers and fathers from Israeli prisons. They are the protectors, the supporters, but most of all they are the comrades in the fight for a free Palestine.” Reham Al Helsi

The Pietas of Palestine bear the pain full weight of the vicious Israeli occupation made crueller for its illegality and impunity that is shielded by Western betrayal of international law and morality.

While the world looked the other way during the 70 years since the Nakba, the Catastrophe of zionist terrorism that established parasitic Israel, no Palestinian woman has been spared grief, terror and trauma because every family has been torn apart by tragedies of a beloved murdered, or incarcerated, or denied desperate medical attention, or a family home demolished, or livelihoods destroyed as unemployment emasculates their men or when life-giving olive trees and orchards are laid waste by bulldozers and the Annexation Wall. Or all of the above.

You, who casually turn your taps and light switches on and off, consider the everyday stress of barely sufficient water for the family that trickles from the Israeli Mekorot company and the systematic electricity blackouts in summer and winter extremes metered out through Israel’s covert system of slow-motion genocide.

Ask yourself, how does a Gazan mother ensure her children’s health when the Israelis deliberately, as means of illegal collective punishment, calculate “the minimum caloric intake necessary for Palestinians to avoid malnutrition so Israel could limit the amount of foodstuffs allowed into Gaza without causing outright starvation.”

“In Palestine mothers are sacred. Every one of us has several mothers: the mother that gave birth to us, the olive tree, the land and the mother of all: Palestine. And a Palestinian mother isn’t just a mother to the children she gives birth to, she is mother to all Palestinians.” Reham Alhelsi

Every Palestinian mother knows when her children leave the house there is no guarantee of a safe return. A child throwing a stone against the soldiers, jeeps and tanks of the world’s 4th largest nuclear military may be buried that afternoon with a bullet in his/her back, or left to bleed to death on the street as the occupation forces prevent the ambulance from attending. Or that brave stone may effect 15 years in prison for her teenage child while Israel’s military killers, like Elor Azaria who point blank murdered a wounded Palestinian youth lying unarmed on the road gets 18 months for ‘manslaughter’! If that. The only assurance for the Palestinian mother is the killer’s promotion will be forthcoming.

Hanin Zoabi was born in Nazareth and in 2009 became the first Palestinian woman to become, via the Arab Balad party, a member of the Knesset; the Israeli government.

As Israel has severe anaphylaxic reactions to Truth, Hanin’s blunt truthfulness, calling an Uzi an Uzi, challenges the media monopoly on Israel propaganda hence drawing hellfire from the Zionists.

She has compared Zionist Occupation Forces to ISIS-  a fair comparison given both aim to set up exclusive political entities through violence: a Jewish State from the river to the sea, and a wide sweeping Islamic Caliphate. She was slammed and urged to apologise for calling Israeli commandoes ‘murderers’ for killing 9 unarmed Turkish humanitarian workers on the Gaza flotilla vessel, Mavi Marmara, on which she was a passenger.

Au contraire, she demanded in parliament, “Those who murdered need to apologize, you need to apologize.”. Shrugging off the Holocaust taboo, she stated “During Kristallnacht thousands of Jewish businesses and synagogues were burned, while the Germans remained silent. Today, as the homes of Palestinians are burned, as churches and people are burned alive- the majority in Israel remains silent.”

For her feisty principled outspokenness on Israel’s violent transgressions against Palestinians and democratic delinquency….

“Rather than seeing democracy as equality and human rights, now the only meaning of democracy in Israel is the rule of the – Jewish – majority.”

…. Hanin has been bullied and reviled by Israeli parliamentarians, denigrated  as ‘terrorist’, ‘neo-fascist,’ “Haneen Zoabi is not a circus, she isn’t even worthy of being used as lion food.” (Avi Dichter) and repeatedly threatened with the revocation of her citizenship, suspension and expulsion from the Knesset.

Undaunted, the formidable Hanin unswervingly demands a one state with equality for all its citizens and in the meantime she  fights for equal rights for Palestinian citizens of Israel, challenges Zionism and its recent law that legalised theft of Palestinian land through settlement expansion, and serves the rights of women.

Ahed, 15, was born with the Tamimi DNA of resistance and was suckled on Israeli tear gas and Palestinian sumoud in the weekly protests of her village, Nabi Saleh.

Nabi Saleh has 500 residents whose daily view across the valley is an army base alongside  the Jewish settlement, Halamish, built on their stolen land. They began weekly protests in 2009 organised by Ahed’s parents Bassem and Nariman, when the settler militia took over their village spring. Bassem, a grassroots nonviolent advocate has been described by the EU as a human rights defender. He has been arrested, tortured and incarcerated at least 4 times, once for 3 years. More than 13% of Nabi Saleh protestors have been in Israeli detention.

The first time I saw Ahed was on You-tube. Then all of 11, she was doggedly confronting with her little fist Israeli soldiers armed to the hilt, demanding the release of her brother. Like Justin King, her courage had a profound impact on me,

“It wasn’t just the defiance in her eyes. It was the fact that it wasn’t new to her. She had obviously seen more carnage and violence than most. She was a veteran. The world is becoming more and more accustomed to female warriors, so why did this veteran’s battle have the impact it did? She was 13 years old. I say “woman” because she isn’t a “child” and she isn’t a “girl”. Not anymore. She’s a hardened veteran. We bought her childhood at the price tag of $10 million dollars per day in military aid to Israel.” Justin King Tamimi raised fist

The next time I saw this teenage warrior, she was fiercely locked, along with her mother, aunt and cousin, onto an armed army thug that was attempting to arrest her 12 year old brother. The soldier was no match for these Tamimi lionesses and Mohamed was released. The big bad Israelis are so afraid of young Ahed, that pressure erupted to deny the 15 year old a visa to enter the USA for a speaking tour. While David and Goliath are myths, Ahed versus the Goliath Zionist army is reality.

One day, Ahed may succeed Hanin Zoabi as President of Palestine: both have more integrity and courage in one eyelash than all the traitors in the Palestinian Authority.

Samah Sabawi is a Palestinian-Australian-Canadian poet, playwright, editor, PhD student, powerful orator, political commentator and spokesperson for Palestinian freedom. She was born in Gaza to Suhailah and Abdul Kareem Sabawi, a distinguished poet, author and non-violence revolutionary. The Sabawi family’s forced wrench from Gaza is characteristic of Palestinian exiles in the diaspora and Samah’s passion for justice and love for her homeland is the gravitational pull of her activism and art,

I Stand Dispossessed of Everything But My Words

They are words of truth

Of fire and steel

I use them deliberately

Not to incite hatred

But to lighten up this darkness

That tore me into 11 million pieces

And scattered me across the earth

These are the words that lay the foundation

Of the language of my liberation

Samah is a sought after spokesperson whose sharp intellect lit with poetic flair and reconciliatory grace makes her a powerful ambassador for Palestine in the diaspora. Yet, like Hanin, Samah too has been a target of controversy; the tentacles of the Zionist lobby have no boundaries in the west. In 2014, Samah was dropped from a panel debating the two-state solution at the Wheeler Centre Melbourne because of her support for BDS. When she was reinstated, Jewish panellists Geoff Bloch, Dvir Abramovich and the Head of the General Delegation of Palestine to Australia, Izzat Salah Abdulhadi withdrew from the event. In 2016, Abramovich reared his Zionist head to strike with the faux accusatory venom of anti-semitism at Samah’s play, Tales of a City by the Sea, a love story set in Gaza,which was included in the  Victorian school curriculum and has since gone on to win literary awards.

On this 2017 International Women’s Day, I close with Samah’s poem, published in I remember my name,

For my sisters in the Arab World and beyond

Not a fragment of your shadow

Not a rib torn out of your torso

Not a mail order

Not a house slave

Not a fairy-tale princess

Not a damsel in distress

Not a genie in a bottle

Not lacking in brain or piety

Not a fountain of propriety

Lived in an instant

I am constant randomness

I am chaos in stability

In songs you ache for me

Your barren desert and your fertile field

My womb yields the fruit of life

I am your Mother

A prince of poetry wrote of me

A mother is a school if well prepared

You prepare a well-mannered nation

For a thousand and one Arabian nights

In the Holy Scriptures

I am your Eve in the Garden of Eden

My qualities revealed in the holy Quran

I am your dream

I am strength and weakness

I am your lived reality

And all that you refuse to see

I am what you cannot define

Of flesh and blood

I am neither a reflection of you nor on you

Your ticket to paradise does not begin with my virtue

Your peace of mind does not begin with my conformity

Your redemption does not begin with my submission

Your honor is not defined by my chastity

Your fantasies are your own

Your vice is yours alone

For I carry my own

Dr. Vacy Vlazna is Coordinator of Justice for Palestine Matters and editor of a volume of Palestinian poetry, I remember my name. She was Human Rights Advisor to the GAM team in the second round of the Acheh peace talks, Helsinki, February 2005 then withdrew on principle. Vacy was convenor of  Australia East Timor Association and coordinator of the East Timor Justice Lobby as well as serving in East Timor with UNAMET and UNTAET from 1999-2001.