How do you describe a girl who, at the age of 20, revolted against her family to marry a boy of her choice, while both were still university students? And how do you explain a woman of 80, still full of enough youthful energy to write poetry and newspaper columns and host some of the best gatherings of journalists and intellectuals in Islamabad? Yes, we are talking about the indomitable Kishwar Naheed. With over two dozen books to her credit and half a dozen national and international awards, she is unquestionably one of the best known names in Urdu column-writing and literature. She turned 80 last week, on June 18, and that gives us another excuse to talk about her achievements, life and writings. Achievements, though many, did not come to her smoothly as she had neither the support of her family nor did she beg or borrow her credentials. She had to fight, and that she did with courage. 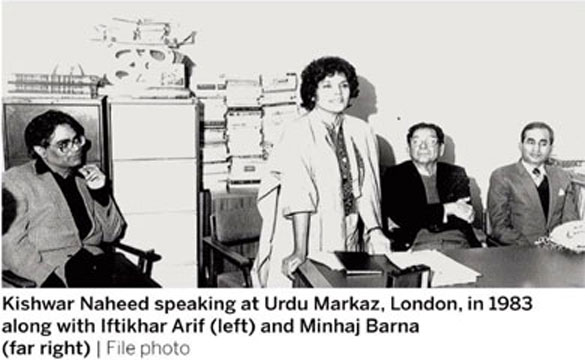 Born in BulandShehr, Uttar Pradesh, in 1940, she migrated to Lahore with her family after Partition. With no claim to fame or property, they lived with meagre resources, but she insisted on going to college and then university. Reading was her passion, so nobody could dissuade her from immersing herself in books. Going beyond the textbooks of economics which she studied at the University of the Punjab she devoured tomes of classical literature. She found her calling in poetry, and the Lahore of 1950s was abuzz with poetry recitals from schools and colleges to universities.

The intellectual and literary decline that set in after the imposition of the first countrywide martial law and the military dictatorship of Gen Ayub Khan was still to come. Meanwhile, this girl had the temerity to barge into intercollegiate competitions, and to refuse to vie for a consolation prize reserved for girls. She had to challenge the male-dominated mores of the time by demanding equal treatment, and struggled to win it. Her voice became a volcano of fiery discharge that set ablaze the literary stage in Lahore, where male chauvinism was dominant.

But when she got involved with the love of her life, both families came down hard on her. She either had to marry immediately and leave her home for good, or she could quit her studies and stay home, to be married off by her family. The choice was stark, but not enough to daunt her spirits. She took the plunge and married at her will. Thus began a lifelong struggle for survival, working one job after another, moving from one rented house to the next, and raising children almost single-handedly.

All along, her forthrightness was her best asset, that also won her many friends who applauded her efforts on both the domestic and intellectual fronts. Sufi Tabassum was one of them; he guided and helped her at various times, as if she were his own daughter. There were some others who appreciated her, and yet many others who deprecated the importance of her work. But thanks to her tireless efforts and timely production of good poetry, within a decade she emerged as a respected poet and role model for many women in Pakistan.

Naheed`s poetry was not some run-off-the-mill churning of lines to please the mostly male audience. She broke new grounds for the women of her country; women who learned from her how to defy unreasonable restrictions. This defiance is a recurrent theme in her poetry, and keeps it fresh even after decades. Her writings both in poetry and prose are a call to rebel against all sorts of discrimination, be it in the name of caste, creed or colour. Most women in countries such as Pakistan can identify with her.

Her first collection of ghazals, Lab-i-Goya [Lips that Speak], appeared in 1968 and was an instant success. It won her the most prestigious literary prize of the time, the Adamjee Award, in 1969 she was not even 30 years old then. Look at the following from Lab-i-Goya: People say that I walk in my sleep, Burst out crying when I see someone laughing.

Desire follows me around, And I knit garlands of thorns.

In the lazy afternoon of the summer, I listen to the heartbeat of the earth.

(Translation by Baidar Bakht and Leslie Lavigne) Then she moved to other forms of poetry and, in 1971, BenaamMusafat [Nameless Journeys] followed. The influence of Faiz Ahmed Faiz and Majeed Amjad is noticeable in her later poems. As Naheed perfected her craft, her diction reflected that she had imbibed from the classical influences, but kept her own distinct style. Her artistic mastery blossomed in the `70s and`80s, when she had to see many upheavals in her personal and professional lives. These were compounded by the no less troublesome political events in the country. It appears that her marriage was never a bed of roses, but she and Yousuf Kamran managed to remain husband and wife for 24 years till Kamran`s death in 1984.In 1975, she published some more poems and translations and then, in 1978, came a major collection, Galiyan, Dhoop, Darwazay [Lanes, Sunshine, Doorsl. In this collection, she touches upon the issue of the man-woman relationship in the context of the experience of life. In her own words, by then she ‘had gained the confidence to communicate and write about these issues openly. ` She was experiencing conflict within her home and witnessing it outside. But soon she outgrew it and developed her own consciousness that helped her withstand challenges and keep moving on.

As her horizon expanded, Naheed started reading and translating literature from around the world, especially from Pablo Neruda.

When she became editor of Mah-i-Nau, her encouragement enabled many younger writers to appear in the pages of this magazine. She has always been generous in lending support to young writers, who still acknowledge her. The most challenging period of her life was after 1977, when Pakistan faced yet another military dictatorship which was brutal and brainless at the same time. Those who have undergone the torture of living through that period still carry the scars of that time.

The intelligence personnel who at that time were mostly from the Crime Investigation Department (CID) constantly followed and harassed pro-democracy and progressive activists, journalists and intellectuals alike; Kishwar Naheed was no exception. That was the time when, Naheed says, `many close friends decided to break allties with me.` The military dictatorship of Gen Ziaul Haq was not only having disastrous effects on Pakistani society at large, but also imposing a strict code of conduct on art, cinema, drama, education and gender roles, and was curtailing human rights. Naheed gave expression to all these in her poetry.

The position of women in society was especially threatened and Naheed did not take it lightly. Gen Zia was a major setback for Pakistan and its people who lived under the shadow of oppression, and this oppression became a motif in Naheed`s poetry. In later years, she emerged as a collective voice of Pakistani women with the likes of Anis Haroon, Ayesha Siddiga, Azra Abbas, Beena Sarwar, Fahmida Riaz, Khawar Mumtaz, Nasreen Azhar, Razia Bhatti, ZahedaHina, Zakia Sarwar and many others, all giving vent to their anger in a distinct manner.

Over the years, Naheed worked at Radio Pakistan, was director of the Pakistan National Centre, initiated the Business and Professional Women`s Club in Lahore, established the organisation Hawwa for women workers, and was invited to participate and speak at dozens of national and international conferences. When Benazir Bhutto assumed power in 1988, she appointed Naheed director of the Urdu Science Board, Lahore, but she was removed when Nawaz Sharif became prime minister in 1990. Again, in 1994, in the second Benazir government, she became director general of the Pakistan National Council of Arts (PNCA), from where she was removed, again, by the second Nawaz government, prompting her to take early retirement in 1998.

She has been writing weekly columns for the leading Urdu daily Jang since 1990. In prose, her translations of BapsiSidhwa, Leila Khalid and Simone de Beauvoir are worth reading, and so are her collections of columns and memoirs such as Buri Aurat Ki Katha [A Bad Woman`s Talel and Shanasaaiyan, Ruswaaiyan [Acquaintances, Scandalsl. She received the Mandela Prize in 1997 and the Sitara-i-Imtiaz in 2000. Her writings have been translated into dozens of languages and the count is still increasing. On her 80th birthday, she deserves much more than a newspaper article. Perhaps an annual literary award in her name would do some justice.

At the time of this writing, Naheed has tested positive for Covid-19; we wish her a quick recovery and a healthy, long life.

Dr Naazir Mahmood is a columnist and educationist