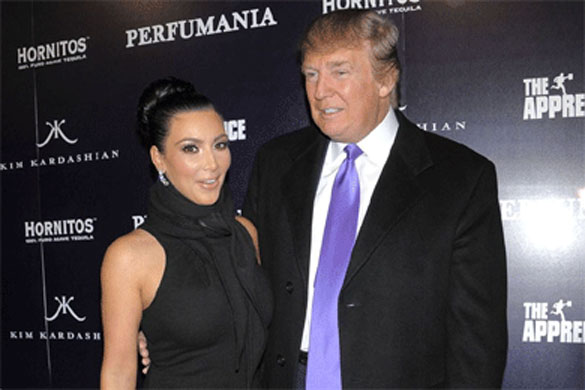 Kim Kardashian and Donald Trump promoting the Reality star's Appearance on 'The Apprentice' in 2010 (Photo: Rex)

(AhlulBayt News Agency) - The source in the town of Merkadeh said that three European women that were members of ISIS's women battalion have been killed by the terrorist group on charges of spying for the international coalition forces.

The source added that members of the Women Battalion are considered as ISIS's security body.

Also, a local source from Merkadeh town in the Southern parts of Hasaka said last week that 15 foreign members of the ISIS terrorist group fled the region.

The source said after the incident, the ISIS started detention of a number of its senior members.

"Faced with the unexpected missing of its foreign members, the ISIS also arrested the family members of those who have fled Hasaka," he added.

The ISIS was on full alert and stationed its members at the checkpoints of the town and its nearby areas, the source said.

The ISIS is facing the dilemma of losing its members and commanders, specially foreigners, in both Iraq and Syria.

PRISTINA, KOSOVO — Women from Kosovo who joined the Islamic State group in Iraq and Syria were recruited mainly by their husbands and joined for family reasons, not out of religious fervor, researchers have found.

"Of more than 4,000 foreign fighters from Western Europe who have joined violent extremist organizations in Syria and Iraq, more than 700 are women, more than 40 of whom were from Kosovo," said a report released this week by the Pristina-based Kosovar Center for Security Studies (KCSS).

However, unlike Western European women recruited into violent extremist organizations through online propaganda, the KCSS report found that Kosovar women, because of prevailing socioeconomic conditions such as high unemployment and low education levels, are more likely to be recruited by family members, especially husbands.

In Kosovo, the report said, "statistics show that women are discriminated against in almost every sphere of public life."

"When compared to men, women are underrepresented in all levels of institutions and decision-making process [and] unemployment is also higher among women," the report said. "This society-wide general discrimination is also reflected within the structures of Kosovo's Islamic Community (BIK)."

"In countries like England, France, Belgium, recruitment is done more through IS online propaganda, where the group urges women to get married and shows them how to do that in the so-called Islamic State," Kelmendi told reporters. "Meanwhile, in Kosovo, we have noticed that recruitment is done directly from their husbands, because women are not employed.

"At most they may have had one year of college education, and their basic knowledge regarding IS and religion comes from their husbands," she said.

But co-author Rudine Jakupi said that not all radicalized Kosovar women are victimized by others.

"Ideological reasons, socioeconomic factors and personal motives" drive some Kosovar women to radicalization, she said. "As per our interviews, some of the women said that the feeling of being discriminated [against on religious grounds], as well as their identity and isolation, influenced them on joining IS."

Convinced of their cause

Once with IS in Syria and Iraq, the women face a point of no return, the researchers said.

"Kosovar women, like some Kosovar men who joined extremists in the conflicts in Syria and Iraq, are deeply convinced that they made the right decision as Muslims or as Muslim-practicing believers," Jakupi said. "They are convinced that they will be rewarded for this decision in the next world."

Across the Western Balkans region, the number of radicalized women in Kosovo is second only to the total in Bosnia-Herzegovina, which has seen 60 women join conflicts in Syria and Iraq.

The report was produced with the help of a grant from the European branch of the New York-headquartered Open Society Initiatives, with assistance from the Think Tank Fund for Wider Europe.

The number of fighters joining extremist groups in the Middle East from Kosovo, once the highest per capita in Europe, has dwindled in the last year, according to government officials, analysts and ex-fighters.

The turnabout came after a government crackdown in Kosovo on extremist recruiting, an increased education campaign to show the ills of radical groups, and a waning appeal of IS militancy, experts said.

"Kosovo has done great work in getting local Muslim communities directly involved in efforts to educate their members against the dangers of radicalization," Sarah Bedenbaugh, a Balkan expert at the Atlantic Council, a Washington-based think tank, told VOA last year.

Kosovo is the smallest country in the Balkan region with a Muslim-majority population. The country gained its independence in 2008 after a long-fought war with Serbia.

The landlocked nation has struggled with increasing radicalization of Muslim youth that increased after the start of the Syrian civil war in 2012. Roughly 93 percent of Kosovo's 1.7 million people are from Muslim family backgrounds. Young people in Kosovo were drawn to become militants as high youth unemployment and poor education left them wanting, analysts say.

Kim Kardashian West has waded into the row over Donald Trump's Muslim ban, to the surprise of virtually everyone.

The reality TV star tweeted to her 49.8 million followers, with statistics on the likelihood of Americans being killed by an immigrant jihadist.

The President has ordered a ban ban on people born in seven Muslim majority countries, including Syria, Iraq, Iran, Libya, Somalia, Sudan and Yemen travelling to the US - even if they have legal green cards.

According to the statistics, an average of two Americans are killed a year over the last ten years by Islamic Jihadi immigrants.

Vastly more Americans are killed each year by lightning strikes, lawnmowers - and simply falling out of bed.

Ten times as many Americans die at the hands of toddlers with guns.

And five Americans are killed by home-grown far-right terrorists.

The star's tweet was a surprise to many followers - particularly after her husband, Kanye West, visited Donald Trump at Trump Tower in the days following his election.

Kanye posed for photos in the New York building's gilded lobby, but was tight-lipped on whether he supported Mr Trump.

The rapper later said he had visited the President elect to discuss "multicultural issues."

He said: "I wanted to meet with Trump today to discuss multicultural issues. These issues included bullying, supporting teachers, modernizing curriculums, and violence in Chicago.

TRUMP AND KANYE SPEAK AFTER THEIR 'MEETING'

"I feel it is important to have a direct line of communication with our future President if we truly want change."

It later emerged Kim and Kanye had voted differently in November’s Presidential election, but she said she “respects her husband.”