By Farahnaz Ispahani And Nina Shea 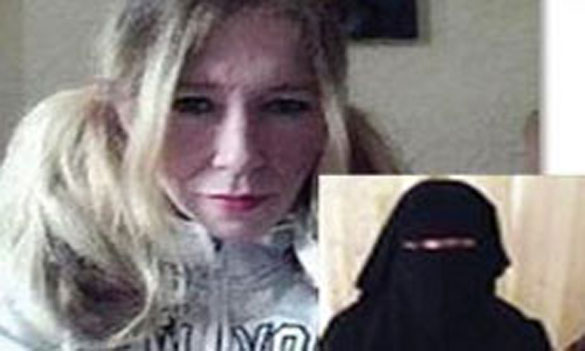 Photo: Sally Jones Before Her Conversion And, At Right, More Recently

On September 29, the State Department added British citizen Sally Jones to its list of foreign terrorists. Jones is a 46-year-old punk rocker who converted to Islam and moved from Kent to Raqqa to join the Islamic State in 2013. She is also newly widowed, having lost her 21-year-old husband, ISIS hacker Junaid Hussain, in an American airstrike targeting him a few weeks ago. “Mr. and Mrs. Terror,” as Hussain and Jones came to be known, were active on social media to extend the Islamic State’s reach in the West. The State Department announcement duly noted that the pair had published a “hit list” of American military personnel to encourage lone wolf attacks, recruited foreign women for ISIS, and in August offered instruction in homemade bomb-making for attacks in Britain.

Jones clearly deserves to be on the terror list and to be on it in her own right. She is no innocent, duped into a life of terror, or pushover for male domination. In fact, she is living refutation of the theory that female empowerment alone is the path to Islamic moderation, as the State Department has long maintained. Women, too, can be seduced by radical Islamic ideology.

An old Facebook photo shows Jones in the costume of a Catholic nun, holding a gun. In her recent posts, she is shown wearing Islamic garb, with an AK-47 assault rifle. She tweets such violent threats as “You Christians all need beheading with a nice blunt knife and stuck on the railings at Raqqa. .  .  . Come here I’ll do it for you.” Lately she is taking credit for an online posting of the home address of the Navy SEAL who claimed to have killed Osama bin Laden, along with an appeal for American jihadists to murder him. It’s not for nothing that State designates her a “fighter.”

Women militants like Jones are on the front lines in enforcing the Islamic State’s totalitarian system in the Khanssaa Brigade. Reportedly led by British women, the brigade is a morality enforcement militia by women against women. In the PBS documentary Escaping ISIS, two young members who functioned as Khanssaa shock troops before recently defecting in Turkey reported little regret about their jobs patrolling markets for female dress code violators, whom they would detain and lash 20 to 40 times with cables. Khanssaa is also responsible for enforcing the male guardianship regime, the Islamic State’s principal means of institutionalizing the subservience of women within its territory. Though they don’t hold rank or engage in battle, Khanssaa officers receive weapons training.

Jones, aka Umm Hussain al-Britani, has played an instrumental role in the Khanssaa Brigade, which, among other atrocities, has institutionalized the revival of sexual slavery. Khanssaa officials are reported to be the main enforcers of the rules issued by the ISIS fatwa department for its slave houses. Jones is hardly alone.

Over several months before being killed last February while an ISIS captive, 26-year-old American humanitarian worker Kayla Mueller was repeatedly raped by the Islamist terror group’s highest leader, Abu Bakr al-Baghdadi. This was not just one more battlefield atrocity. Using the group’s only American female hostage, the “caliph” was setting a precedent—one that would revive the long-abandoned institution of sabaya, the enslavement of female infidels captured in battle and their use by jihadists for sex. Baghdadi blessed these serial rapes, not only as acceptable, but as moral behavior for ISIS men. Since then, slavery, rape, and sexual abuse at the hands of ISIS have become the fate of thousands of Yazidi women and girls, as well as smaller numbers of Christians, Shiite Muslims, and females of other religious minorities.

Recent reporting has uncovered numerous details of ISIS’s enslavement and sexual abuse of female “unbelievers,” each instance more extreme than the last. But often overlooked amid the victims’ horrifying accounts is the indispensable role played by Jones and other female officials in institutionalizing sexual slavery in the Islamic State.

It was, in fact, an Iraqi woman, Nasrin As’ad Ibrahim, commonly known as Umm Sayyaf, the wife of ISIS chief financier Abu Sayyaf (also now deceased, killed in May by American special forces), who organized ISIS’s use of sabaya, and who personally managed Kayla’s enslavement. We know of Kayla’s ordeal from media accounts of interviews with her parents, who were briefed by U.S. officials after questioning Umm Sayyaf, and with a teenage Yazidi girl who had been chained with Kayla in the Sayyaf home.

From Umm Sayyaf, American interrogators uncovered the existence of a wives’ club of the ISIS leadership. These women gather and exchange intelligence to transmit to their powerful husbands. Precisely because they are not suspected, they are given responsibility to carry out missions and provided with deep knowledge of ISIS’s financial and tactical operations.

Jones, as the State Department noted, served as an ISIS propagandist. She and others like her have already lured some 550 foreign Muslim women, who, as potential brides, are used, in turn, to lure the foreign men who will be suicide bombers and militants—an estimated 30,000 so far, with 1,000 new arrivals every month. They aggressively employ social media to portray the ISIS war zone as an Islamic utopia, replete with free houses, taken from those who’ve been killed or have fled, and household appliances. Umm Sumayyah Al-Muhajirah is a propagandist who defends slavery and forced sex with female slaves on theological grounds. In the May issue of ISIS Dabiq magazine, she stresses that becoming enslaved to a Muslim is actually a blessing for the infidel slave girls for it can lead them to Islam. Holding this belief, Abu Abdullah al-Ameriki, a Muslim convert, is an American ISIS leader who prays before and after raping his captives, it was revealed in late September on CNN by Bazi, a 20-year-old Yazidi woman who managed to escape from his home in Syria.