And We have enjoined on man to be good to his parents. His mother bears him with pain, and brings him forth with pain. And the bearing of him and his weaning takes thirty months, till, when he attains his full maturity and reaches the age of forty years, he says, ‘My Lord, grant me the power that I may be grateful for Thy favour which Thou hast bestowed upon me and upon my parents, and that I may do such good works as may please Thee. And make my seed righteous for me. I do turn to Thee; and, truly, I am of those who submit to Thee.’ (Al Quran 46:16) 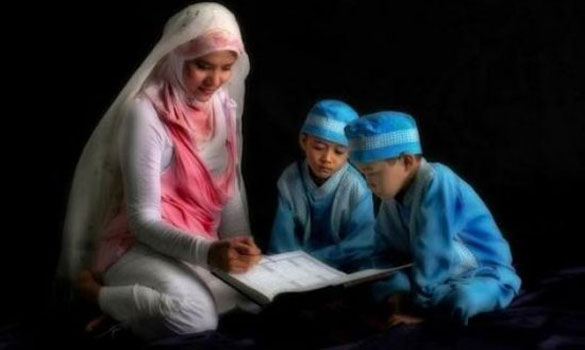 The other day, my friend Sandi was complaining about her 82-year-old mother. “She still doesn’t think I can do anything right. No matter what I’m doing, she’ll tell me how to do it better. Sometimes I get so mad!”  I tried to soothe her, “Well, that’s because she is a mom. Mothers never stop being interested in their kids, no matter how old.” She thought for a minute, and then asked, “Do you think we’ll do the same to our kids?”  We looked at each other, then both of us nodded and said “Yup! We probably will!”  But on the heels of that depressing notion came a reassuring thought: I had an advantage over Sandi and had a great deal to be thankful for. I am hopeful that my children, as Muslims, will follow Islam’s beautiful guidelines for treatment of parents.

Islam expects children to maintain an attitude of love, affection, respect and kindness to their parents, even when they get to an old and difficult age, and to give them priority over all other things, except God. The Holy Quran contains a very comprehensive verse on this topic, which firstly tells Muslims to “…that ye show kindness to parents.”  Then for situations when the behaviour of one or both of the parents becomes extremely trying and sometimes offensive, the verse continues “If one or both of them attain old age with thee, never say to them as much as ugh nor reproach them, but always address them with kindly speech. (17:24)    Then it says: “Lower to them the wing of humility out of tenderness….”       In other words, we must never forget what we owe to them for bringing us into this world and taking care of us. Finally comes this prayer “…and   say, ‘My Lord, have mercy on them even as they nourished me when I was a little child.” (17:25). Every aspect of the child-parent relationship is beautifully handled in this verse.

Islam, which is often wrongly accused of suppressing women’s rights, actually draws attention to the often thankless and unending work of mothers. The Holy Quran  recognizes the tremendous sacrifices  that women  make  to become mothers,  although they have the freedom to choose any career, when it states: “And We have enjoined on man to be good to his parents – his mother bears him in weakness upon weakness, and his weaning takes two years – and said, ‘Give thanks to Me and thy parents. Unto Me is the final return; (31:15)”

Unfortunately, this attitude towards motherhood, although endorsed by most other religions, has been somewhat lost in today’s society. Mothers in this country are still struggling with their status.   Mothers Ought To Have Equal Rights, or MOTHERS, is an organization that, according to its website, recognizes that: “In the past few decades women have made enormous progress, but many women who become mothers have been left behind. The work of caring for children and other dependent family members is still unpaid or grossly underpaid, disrespected, and unacknowledged by all of the major institutions in our society.” (www.mothersoughttohaveequalrights.org)   Mothering Magazine’s editorial says: “We desperately need to recognize the value of mothers, and no one should ever have to apologize again for being ‘just a mom’.” (www.mothering.com)

Islam never views a mother as “just a mom”.  The founder of Islam, Muhammad (peace and blessings of Allah be on him) elevated the status of mothers 1500 years ago to an unprecedented height when he declared that “Paradise lies under the feet of mothers.”  A small sentence, but it speaks volumes about motherhood.   While it gives mothers the important responsibility of making their homes into a ‘heaven on earth’ by creating a loving, warm and nurturing atmosphere for all the family, at  the same time it acknowledges and appreciates the complexity and value of this task by rewarding them with the ultimate prize – which is paradise.  No wonder that being so greatly honoured and valued as mothers, the majority of Muslim women are happy to be stay-at-home moms.

Of course, Mother’s Day came and went and mothers were fêted for a day with cards, gifts and flowers. Although today it is seen as a general celebration of motherhood, it was actually founded to honor women who were trying to raise awareness of social problems.   In 1905, Anna Jarvis began campaigning for a day to memorialize the work of her mother, also named Anna Jarvis, who had highlighted sanitation problems in her community; she eventually succeeded in 1914. However, what began as a day of prayer and thanksgiving for mothers rapidly became more commercial. In fact, before her death in 1948, Jarvis is said to have regretted ever starting the Mother’s Day tradition because she believed that the day’s sentiment was being sacrificed at the expense of greed and profit. What would she have thought about it today, with sixty-nine million sites listed on the Web for Mother’s Day gifts, flowers etc.?

I know that while I will always treasure the homemade cards and gifts my children made for me at school when they were younger, I am very thankful for the honor that Islam has given me in making each day a Mother’s day.