Men and Women Are Moral Equals in Islam 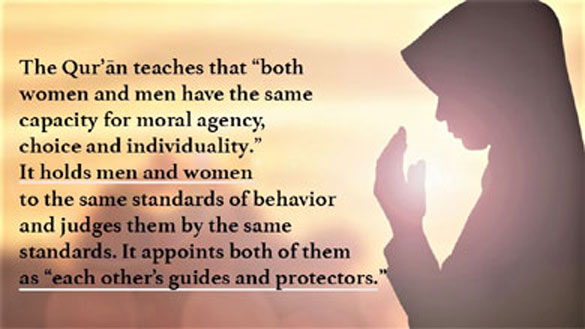 In Islam, men and women are moral equals in God's sight and are expected to fulfill the same duties of worship, prayer, faith, almsgiving, fasting, and pilgrimage to Mecca. Islam generally improved the status of women compared to earlier Arab cultures, prohibiting female infanticide and recognizing women's full personhood.

Islamic law emphasizes the contractual nature of marriage, requiring that a dowry be paid to the woman rather than to her family, and guaranteeing women's rights of inheritance and to own and manage property.

Women were also granted the right to live in the matrimonial home and receive financial maintenance during marriage and a waiting period following death and divorce.

Women contributed significantly to the canonization of the Quran. A woman is known to have corrected the authoritative ruling of Caliph Umar (RA) on dowry. Women prayed in mosques unsegregated from men, were involved in hadith transmission, gave sanctuary to men, engaged in commercial transactions, were encouraged to seek knowledge, and were both instructors and pupils in the early Islamic period.

Some distinguished women converted to Islam prior to their husbands, a demonstration of Islam's recognition of their capacity for independent action. Caliph Umar appointed women to serve as officials in the market of Medina. Biographies of distinguished women, especially in Prophet Muhammad (SAW) household, show that women behaved relatively autonomously in early Islam.

In Sufi circles, women were recognized as teachers, adherents, “spiritual mothers,” and even inheritors of the spiritual secrets of their fathers.

No woman held religious titles in Islam, but many women held political power, some jointly with their husbands, others independently. The best-known women rulers in the pre-modern era include Khayzuran, who governed the Muslim Empire under three Abbasid caliphs in the eighth century; Malika Asma bint Shihab al-Sulayhiyya and Malika Arwa bint Ahmad al-Sulayhiyya , who both held power in Yemen in the eleventh century; Sitt al-Mulk, a Fatimid queen of Egypt in the eleventh century; the Berber queen Zaynab al-Nafzawiyah (r. 1061 – 1107); two thirteenth-century Mamluk queens, Shajar al-Durr in Cairo and Radiyyah in Delhi; six Mongol queens, including Kutlugh Khatun (thirteenth century) and her daughter Padishah Khatun of the Kutlugh-Khanid dynasty; the fifteenth-century Andalusian queen Aishah al-Hurra , known by the Spaniards as Sultana Madre de Boabdil ; Sayyida al-Hurra , governor of Tetouán in Morocco (r. 1510 – 1542 ); and four seventeenth-century Indonesian queens.

Since the mid-nineteenth century, men and women have questioned the legal and social restrictions on women, especially regarding education, seclusion, strict veiling, polygyny, slavery, and concubinage.

State policies enabled groups of women to enter the male-dominated political sphere and professions previously closed to them, although these policies often caused popular and religious backlash.

Debates continue over the appropriate level of female participation in the public sphere. Women are typically viewed as key to either reforming or conserving tradition because of their roles in maintaining family, social continuity, and culture. Women's status has also been used as a means of defining national identity.

Although governments of twentieth-century Muslim nation-states have promoted education for both boys and girls as a means of achieving economic growth, the percentage of girls enrolled in schools in developing countries with large and rapidly growing populations remains low.

Concern for men's jobs has given added incentive to the conservative call for women to adhere to traditional roles as housewives and mothers, although economic necessity has led women to undertake whatever work they can find, usually low-paid, unskilled labor. War and labor migration have increased the number of female-headed households.

Modern reforms have made polygynous marriages difficult or illegal; permitted wives to sue for divorce in religious courts, particularly in cases of cruelty, desertion, or dangerous contagious diseases; provided women with the right to contract themselves in marriage; required husbands to find housing for a divorced wife while she has custody over the children; increased the minimum age for spouses; limited the ability of guardians to contract women in marriage against their wishes; provided opportunities for minor girls wed against their wishes to abrogate the marriage upon reaching majority; enhanced the rights of women with regard to child custody; and allowed women to write clauses into marriage contracts that limit the husband's authority over them.