Triple Talaq Must Face the Axe, and Soon 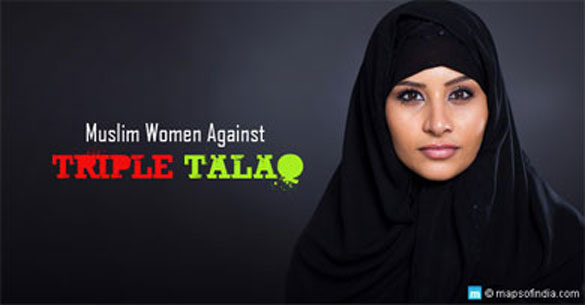 Should triple Talaq, an Islamic practice where a man can unilaterally divorce his wife by saying the Arabic word for divorce, three times in quick succession, be banned? Needless to say, the writing on the wall is clear: That this gender-discriminatory act must end.

The stunning victory of the BJP in recently held Assembly election in Uttar Pradesh, where each Muslim vote counted, speaks all. Muslim women no longer want to remain a victim of the age-long practice of triple Talaq which not violates their rights but also puts them at the receiving end in an already male-dominated society.

Pinning hopes on the saffron party to help put a stop to the medieval practice of such divorce, Muslim women came out in droves to vote for the saffron party in the Assembly poll in the politically most significant State of Uttar Pradesh.

There is no doubt they helped the BJP clinch 312 seats out of a total of 403 — the biggest majority for any party in Uttar Pradesh since 1980. It is important to recall that Muslims make up 18.5 per cent of the 200-million strong population of Uttar Pradesh, as per the 2011 census.

Political gurus feel that Muslim women have reposed faith on what Prime Minister Narendra Modi said last year at a rally, when he asserted that he favoured the discontinuation of triple Talaq, stating that “lives of Muslim women cannot be allowed to be destroyed by triple Talaq”. He also targeted the Opposition for ‘politicising’ the issue and supporting a gender discriminatory practice to appease their vote banks.

Women voters of the community were also disappointed at the silence of the opposition parties in the matter, Union Cabinet Minister and senior BJP leader Ravi Shankar Prasad rightly observed after the Assembly result.

In this backdrop, it is also pertinent to mention about the ongoing petition drive that seeks to end the controversial and biased divorce practice, targeting Muslim women. Launched by the Muslim Rashtriya Manch (MRM), an Islamic organisation affiliated with the Rashtriya Swayamsevak Sangh (RSS), the petition has been signed by over one million Muslim women so far, indicating their mind about what they feel about the triple Talaq practice in India.

It is unfortunate that in modern India, triple Talaq continues. Here, it is permitted under the Muslim Personal Law (Sharia) Application Act, 1937, wherein, in matters of personal disputes, the state cannot intervene and a religious authority will instead pass judgements. But, is this practice part of the basic tenets of Islam?

Many Muslim-majority countries including neighbouring Pakistan and Bangladesh, have outlawed the system. Turkey and Cyprus have adopted secular family laws; Tunisia, Algeria and the Malaysian State of Sarawak do not recognise a divorce pronounced outside a court of law. And in Iran, triple Talaq doesn’t have validity under the Shia law.

It is not that Muslim women have come out for the first time against the regressive practice that violates their right to life, personal liberty, equality before the law and prohibition against discrimination — fundamental rights enshrined in the Constitution of India. There have been several petitions and cases in the courts for quite a long time. According to Naish Hassan, a leading women’s rights activist and founder of Bharat Muslim Mahila Andolan and who has been fighting to end triple Talaq for decades, Muslim women had been raising the issue since the early 20th century, with the Begum of Bhopal having spoken against the practice at a conference in Bhopal in 1915, and later in Lahore in 1917.

However, the movement against triple Talaq picked momentum following the judgement given by Justice Suneet Kumar of the Allahabad High Court, while hearing a petition filed by a woman who claimed that her husband had arbitrarily divorced her.

The Justice tellingly noted that “triple Talaq is unconstitutional; it violates the rights of Muslim women. No Personal Law Board is above the Constitution”.

A survey conducted by the Mumbai-based Bhartiya Muslim Mahila Andolan last year, also suggests that nearly 92 per cent of Muslim women want a total ban on oral unilateral divorce. Many cases have come to light, where women are now increasingly being divorced over media platforms, such as Skype, text messages and WhatsApp.

“They have been divorced by Speed Post; by sending out letters. Some have just simply said “Talaq” three times and the divorce has happened”, Noorjehan Safia Niaz, co-founder of Bhartiya Muslim Mahila Andolan, or the Indian Muslim Women’s Movement, has been quoted as saying to the media.

Now the issue is under the scanner of the Supreme Court, where the Centre has argued against triple Talaq, saying that the practice is “not an issue of religion, but of gender justice, gender equality and gender dignity”. That it certainly is. The Union Government has also urged the court to examine the legality of the practice of polygamy. The final hearing in the apex court on triple Talaq will take place from May 11.

But, all said and done, like any other fight, this one too will be not an easy walk for the Muslim women. They must take a cue from their sisters from the Hindu community, who have been struggling to break the age-old biased practice of barring entry to women in certain areas of temples like Sabarimala; or who successfully fought for their rights in property, against child marriage and the Sati system — and so on.

The All India Muslim Personal Law Board (AIMPLB) has dismissed the NDA Government’s stand and has defended the practice, saying it is better to divorce a woman than kill her. Similarly, the Jamiat Ulema-i-Hind told the court that there was no scope for interference with the Muslim Personal Law in which triple Talaq, Nikah Halala and polygamy are well rooted and stand on a much higher pedestal as compared to other customs.

Now it is up to the Modi Government to deliver what it had promised to the Muslim women. There is also need to strengthen the judiciary system so that women do not go through  lengthy legal procedures that only multiply their social and economic hardships.