'It Is Not Their Faces They're Hiding, It Is Their Fears'

Muslim societies are gradually opening up, when it comes to women.

The older culture of segregation was based on early marriages, which helped prevent sexual frustration. But economic pressure and evolving social attitudes are rapidly changing that tradition. 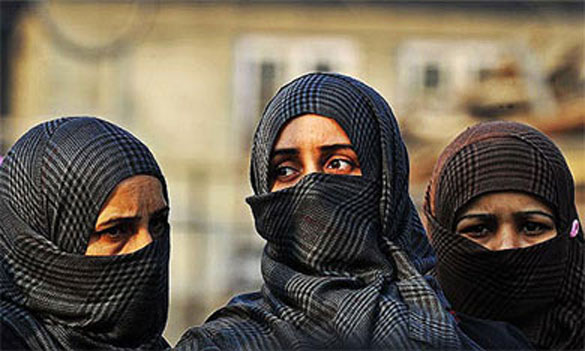 Many in the cities, particularly the educated middle class, are in their 30s when they get married. More and more women are coming out of their sheltered places. There are girls' schools and colleges in every city and town, and even in the bigger villages. Hundreds of thousands of women go out to work every day. So the chances of unmarried men and women meeting each other are stronger now than ever before.

It is having an obvious impact on the society, slowly but surely shifting social and moral attitudes. In the 1970s, a veiled woman was a rare sight in Pakistani colleges and universities. In an institution of 5,000 girls, not even 50 covered their faces.

But the veil staged a comeback under Zia and it spread as those who grew up under his strict religious codes came to colleges and universities.

Today, the scarf has replaced the veil, but it is more common than it ever has been. It’s not just a woman in abaya who wears a scarf. Those in jeans do too.

But it hasn't stopped the mixing of genders as economic pressure forced an increasing number of women to go out and work.

Sometimes, Muslims can also be very expressive, very open. Sex is not something you discuss in public, but nobody stops the quack doctors and the itinerant experts from doing so on the roadside. The expert describes every action and every gesture in vivid detail, often with the help of Western magazines, and nobody seems to mind.

Many stores and storekeepers love to display women's undergarments, and nobody seems to mind.

Such displays are more than a mere device to sell the merchandise. Often it is an expression of the storekeeper’s sexuality or perhaps an attempt to lure a male customer into the shop. Youngsters can be seen staring wide-eyed at the forbidden goods. They often go inside for a closer look and end up buying something else to justify the visit.

Television and newspaper advertisements are full of innuendoes. Sometimes women can be seen promoting even exclusively male objects, such as a razor blade or an after-shave.

Fashion models in the Muslim world have mastered the art of exposing everything, while at the same time keeping a token cover-up. The Qameez or long skirt never slips, but all the curves and contours are still visible.

All this hide-and-seek has made women extremely vulnerable. They are no more the objects behind the veil that they used to be. They are no more protected from the male eyes by the four-walls and the thick curtains that separated their world from that of the men.

Yet, at the same time they are not allowed to come out and live with confidence.

This half-hidden and half-exposed woman gets neither the respect the Muslim culture claims to give her, nor the economic strength that the opportunity to come out and work for a living provides her. She is no longer a traditional Muslim, and therefore, does not enjoy the protection which her position behind the veil automatically provided her.

How does a woman feel living in such an environment?

When I saw Ms Khan, she was playing with clay. With a pair of restless hands, she would separate a piece from a lump lying on her table, shape it up, make a figure and flatten it; only to reshape it, make another and flatten it again. I watched her quietly for a few minutes and then asked her why she was doing that.

"I like playing with clay. It is so soft, so gentle, changes shape so easily. But despite its adaptability, it has a definite character," she said.

Ms Khan was one of five young women artists who were exhibiting their work at an art gallery in Islamabad. It was their first major exhibition and they were all excited. These were young, educated, self-confident and forward-looking women who wanted to "come out and make our contribution to developing the place where we were born," as one of them said.

Four of the five girls had spent four years learning creative art. Now they were graduating with an intention to go out and make their mark. Before coming here, four of them studied journalism and psychology. The fifth was a senior student and had already participated in several exhibitions.

"What does the future hold for you?" I asked one of the graduating students.

"Anything I want. Things have changed now. Ours is not the first group of girls graduating from a school or a college in Pakistan. There are hundreds of thousands of educated women in this country. Many are working outside their homes. There are women in the judiciary, in police, in engineering and at senior positions in the bureaucracy. We now even have women pilots. So I think the time has come for men to stop worrying about our future. We can take care of ourselves," she said.

All the women said they had a strong desire to communicate with others through their work. When asked why they had not chosen journalism after studying it, they said they did not find words strong enough to communicate their feelings and so they went for a stronger medium.

Ms Syed is a painter. She paints portraits that are not portraits because she masks the faces of her subjects. I asked her why, and she replied:

"I want the viewers to try and see the real face behind the mask without removing it. It is important that we learn to do that."

She said most people hide behind something to cover their real faces.

"They carry several masks with them. One is for their family, another for their friends, one for their colleagues and yet another for their bosses. They keep changing the masks according to the occasion. To understand these people, you have to unmask them, layer by layer, and then perhaps you can see their real faces."

Syed uses bright colours because, she says, "people prefer to show the brighter side of their personalities. But I use the mask to expose their dark side, too".

Ms Mirza is a sculptor. She creates female figures. One of her women is shown drowning in a whirlpool.

"This is the whirlpool of race, colour, creed and religion. We are all drowning in it," she said.

She was also displaying caged women: some totally trapped in their cages, others at the brink of freedom. She said she had distorted their faces and twisted their figures to show "how lack of freedom distorts a human being."

Mirza comes from a family that placed no restrictions on her. She was free to do what she wanted to.

"Yet I want more freedom. I want to be free of all ties, emotional or physical."

She explains that she selected sculpture as a medium because of its "three dimensional affect and also because it gives me more freedom to express myself."

Another student, Ms Malik was also a sculptor, but different from Mirza. Her figures were tender, more feminine. They had all the curves of a female body, but the faces were covered in veils. Those not wearing veils had no faces.

"I am not displaying veiled figures. It is not their faces that they are hiding, it is their fears," she said.

"Perhaps my women are afraid of the society, perhaps of masked men and the bearded priest or maybe they are afraid of themselves. Don't ask me. Look around and you will find the answer," Ms Malik said.

Ms Abbasi was different from all the others. Her paintings had an Islamic touch. In one of her works, the 'Kalima' or the Muslim declaration of faith was shown emerging from behind an abstraction of lines and curves. Domes and minarets dominated her other paintings.

She does not see a conflict between the past and the present. "What we are now is because of what we were yesterday," she said. "We are Muslims and we can't deny that. Similarly, we also can't deny that we live in today's world."

She said she was completely at ease with "what we are" and did not see the need to "act out an alien culture."