The connotation of resistance has always been ambiguous and vague. The Cambridge Dictionary defines resistance as ‘the act of fighting against something that is attacking you, or refusing to accept something’; but what one has to realize is that the implication of resistance doesn’t stop right there. In physics, each object that prevents the flow of electricity through it, ends up in the list of being called a ‘resistors’. I feel politics and society are no less complicated than physics.

However unlike Physics, each attempt made to defy the government in Indian politics today not only leads the person to the category of human resistors but also to the group of being called ‘anti nationals’. Each endeavor to push societal expectations and stigmas away will open new avenues to be the novel member of being an outsider or a castaway. Resistance scares governments and societal institutions, because means to resist does not come in manual or a text book or there exist no Wikipedia page that tells those in power, in what form resistance could formulate and appear.

Hence, implications of resistance are dual, for the ones who hold power and authority, resistance might be frightening, bloodcurdling and most importantly threatening, but for the resistor, it is rather, empowering and liberating. From pressing the NOTA option, to walking miles in a protest, to writing poetry to shake the mind, or wearing the Hijab, resistance is so diverse that one cannot name it all.

But who thought wearing a piece of cloth, wrapped around the head of woman might be a symbol of resistance? A scrap of cloth that has the sole purpose to cover than to expose; what power could it hold?

History bears witness to women who changed the world, through powerful decisions, innovative legislations and reforms that bore witness to the fact that women irrespective of race, colour or language have the capacities to bring forth changes; but somewhere in these pages of history, women in hijabs slowly began to disappear. There were ‘visible histories’ but ‘disappearing Hijabi women’. The past is an eyewitness to the fact that the British and French colonists encouraged Muslim women of their colonies to do away with the veil and imitate European women. In North African and Middle Eastern countries, the veil became a representation of national identity and disapproval with the West during liberation and pro-independence movements.

In India, on the 12th of February, 2020, the police in the attempts of stopping the anti-CAA march to the Parliament in New Delhi, tore the hijab of a female protester with the words ‘Yeh Lo Aazadi’. On the same day, Fatima, a student of Jamia Milia Islamia was pulled by her hijab, pushed, till she fell on the ground, while a male police officer stamped on her chest and her stomach with his boots.

The world slowly realized that maybe Hijab was the irritant; a representation of nuisance that made the police hit them like they were perpetrators and the rivals of the own country. While few took the police’s beating, some did not. Ladeeda Sakhaloon and Aysha Renna (in the picture below) stood up to police brutality and ruthlessness; and in no time became the ‘sheroes’ of the anti-CAA movement. Among the faces of the several idols of the protest, were two women in a hijab, leading a protest whose participants were not only Muslims but also Non-Muslims. 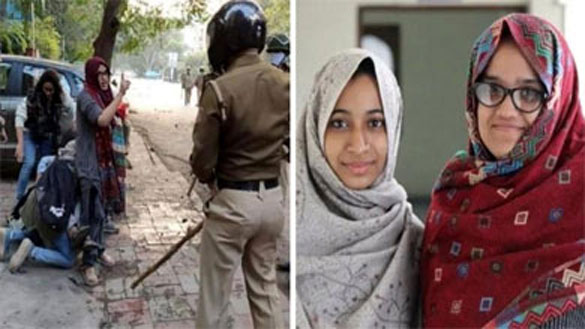 It is interesting to note that resistance via the hijab has not been a peculiar aspect of Indian politics alone; Muslim African-American women in the U.S. at times wear a hijab to indicate their religious affiliation in the attempts to drive out the supposition that all African-Americans are Christians, and that simply people with origins abroad can be Muslim. 13 percent of adult Muslims in the U.S are black American natives of the state.

The first Somali-American congresswoman, Ilhan Omar (picture below) campaigned for the modification in the rulings of the US to allow the wearing of religious head wear in Congress. A law as old as 181 years prevented the wearing of the hijab in the house, and elected leaders like Ilhan Omar, bought political ripples which the government of the day could not turn their face away from. Henceforward, one can say that “Respect existence or expect resistance” might be the call for Hijabi women around the globe; which are invariably paving way for contemporary and modern changes in the political arena. 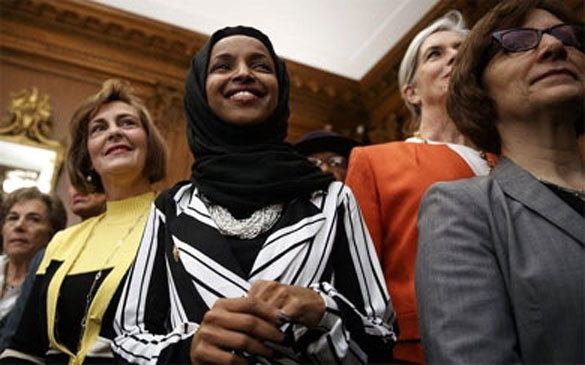 It must be realized that it would be wrong to say that the hijab offers a resistance that is merely ‘political’ but not ‘social’. Dalia Mogahed, the director of research at the Institute for Social Policy and Understanding, a non-profit organization occupied in empowering American Muslims when asked about the hijab, explained how wearing the hijab for a Muslim woman might be a sociologically challenging task; to be exposed to a ‘the ‘hijab oppresses women’ narrative which is not “only racist, it is also sexist” is indeed strenuous and difficult.

To presume that a woman’s hijab was enforced upon her without her will is the regularly held opinions of many, and to combat such incorrigible attitudes and estimations might be nearly impossible. She opined that, “Oppression means the taking away of someone’s power, their agency. Yet a woman in a hijab is only covering her body and hair, not her voice or intellect  and a man dressed in a full robe and head cover, like many do in the Middle East, is not said to be oppressed. To say that hijab oppresses women is to say that the source of a woman’s power, but not a man’s, is her body, not her mind.”

The Gallup Organization conducted a survey in 2005 and the results showed that Muslim Women didn’t see themselves as oppressed. In more than 8,000 face-to-face interviews conducted by the organization, the analyst of the research claimed that, “The hijab, or head scarf, and Burqa, the garment covering face and body, seen by some Westerners as tools of oppression, were never mentioned in the women’s answers to the open-ended questions”.

The resistance the hijab has to offer socially is to fight against the stereotypes pertaining to how it might be acceptable for women to show her skin publicly but how undesirable it was for a Muslim woman to cover up as a matter of choice. The hijab has become a means of resistance to the canons of feminine beauty that claims more exposure as a symbol of modernity and liberation. According to various scholars and researchers, women in hijabs imply that their employers must work together with them based on their credentials and qualifications rather than their looks. Muslim women making their way in the Western world where wearing a headscarf might make it harder to get a job, implies noting but an everlasting struggle and battle to win.

Steven Pressfield one rightly said that, “The more important an activity is to your soul’s evolution, the more resistance you will feel”. In conclusion, it must be taken note of the fact that every person in the socio-political sphere is entitled to the right to identify oneself, or a right to self-identity.

Aniba Junaid is currently an undergraduate student of Loreto College, Kolkata.  She is pursuing Political Science Honours. Her field of interest is Political Psychology, Public Policy, Human Rights and Islamic Feminism. Writing remains as a passion for her and she wishes to write more on women in politics and their role in the changing world order.

Original Headline: Why Muslim Women Wearing Hijab Might Be The Face Of Resistance