Female Pillion Riders Should Sit Sideways On A Motorbike: Fatwa From Indonesian Mayor

The plan to regulate how women sit as pillion riders on motorcycles in the city of Lhokseumawe in Aceh is not only stupid, it is also grossly indecent. The mayor of this gas town, Suaidi Yahya, may have cited sharia (Islamic law) in support of his plan, but the very idea itself is discriminative and indecent. 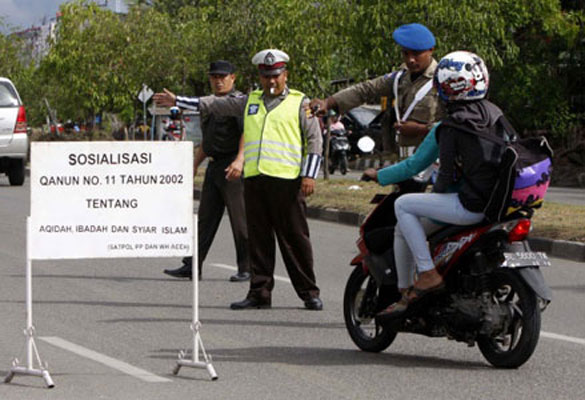 Talk about stupid, one solution for female pillion riders, who find themselves on a motorbike with a man who is not driving safely, is to take the helm — to be the one wearing the pants — except that would probably be seen as even more indecent by the mayor especially if the man straddles behind her.

His suggestion that women should sit sideways with their legs dangling off to one side is neither safe nor comfortable. Perhaps the mayor could try riding that way for a day to experience it. For good measure, someone should choreograph an accident and watch him fall off the motorbike. Just be sure that he wears a helmet, we don’t want anything bad to happen to him.

Stupidly enough, Mayor Suaidi actually has plenty of supporters, although not surprisingly from the city’s ulema, supposedly the guardians of the people’s moral standards. Seriously, you have to have a dirty, sick, indecent mind to find it improper for a woman to straddle pillion: Forget her safety, she is displaying her curves and look — her legs are apart.

Aceh leads Indonesia in pushing the implementation of sharia. It is the only province that practices sharia side by side with the national laws and has come up with the most sharia bylaws, some of which are extremely discriminative of women.

Outside Aceh, there are more than 50 mayoralties and regencies that have formally adopted sharia through the local political processes, and they in turn have also come up with their own stupid bylaws.

The central government appears to have washed its hands in the name of regional autonomy, despite many of these sharia bylaws, which are clearly discriminatory against religious minorities and women, running counter to the Constitution.

Aceh for example has introduced canning as a means of punishment for certain types of offenses. Some towns, including the capital city of Banda Aceh, hold weekly public spectacles after Friday prayers to whip sinners. Not surprisingly, most of those punished are women.

As evidenced by the planned ban on straddling motorcycles, almost all sharia bylaws target women. There is the ban on wearing jeans, the ban on riding in the same car with a man who is not her spouse as well as the ban on walking the streets alone after night curfew — which if broken can lead to the woman facing accusations of prostitution.

What is most indecent about Suaidi’s proposal is that it is carried in the name of Islam, and in doing so the mayor lends credence to the view that Islam represses women. That is certainly one interpretation of Islam that many ulema and men like Mayor Suaidi would not deny (and probably wholeheartedly agree with).

It is really up to decent Muslim men and women across Indonesia, whom we hope make up the majority, to stop all discriminatory practices that not only go against Islamic teaching but also tar the good name of their religion.