Men Deny Us Equality, Not the Qur'an 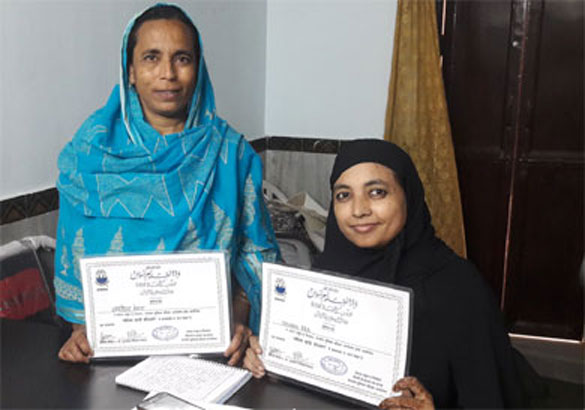 “Do you want to take her back alive? Or do you want her corpse?” That’s what Jahan Ara’s husband asked her mother as he beat his wife 10 years ago. That night, Jahan Ara gave up on her brutal marriage and left her home and four children.

Since then, her husband has refused to let her see the children, though they live in the same city, Jaipur. He has paid no alimony. He has refused to give her the 15 grammes of gold promised as part of the mandatory payment that Muslim men must make to their wives if the marriage ends. Her share in the marital home has also been denied her.

However, like so many women before her, Jahan Ara came away disappointed and bitter. “He refused to help me get my rights,” she says. “I refused to believe that my situation was just. I went around Jaipur asking Ulema [scholars] if the injustice done to me was permitted by the Qur’an. I asked them: Is this my status as a woman in the Qur’an? Is this the ‘justice’ the Qur’an gives me? They all told me: ‘Yes. This is your position. Endure it.’”

She decided to fight back. Today, Jahan Ara is one of the first female Qazis in India.

A seminary in Mumbai, the Darul Uloom Niswan, started a two-year course for female Qazis in 2015. The hope is that, armed with Qur’anic knowledge, they will tackle the customs that are perceived as being detrimental to women.

Afroz Begum, 43, is another of the course graduates. Unlike Jahan Ara, Begum is happily married to a man who supports her work. “The Qur’an gives us equal rights. It gives us the right to life, education, property, the right to free choice. Once Muslim women understand this, their lives will change,” she says.

Since marriage is a legal contract under Islam, not a sacrament, the terms and conditions of the Nikah (marriage) must be discussed and negotiated with the Qazi. At the moment, contracts tend to favour the husband.

On a hot and muggy day, Jahan Ara and Begum sit in a small office in a winding alley off a noisy bazaar in Jaipur’s Muslim quarter. They are trying to soothe the acrimonious exchanges between Imran Khan and his young wife, Huma. Their one-year marriage has hit turbulence, and they hurl accusations at each other, with their parents egging them on.

Jahan Ara and Begum listen to the grievances of both sides. They tell the parents to keep out of the marriage and counsel the couple that they need to be more tolerant.

“A male Qazi would have told Huma to go back home at once and obey her husband,” says Begum. “Most Muslim women don’t know anything about their rights. But now things will be different because we have learned what the Qur’an says.”

Sitting with them is Nishat Husain, head of the Bhartiya Muslim Mahila Andolan (a women’s group) in Jaipur, who says that the two Qazis have much work to do.

Understanding that the Qur’an gives women equal rights have made Jahan Ara happier. After separating from her husband, she struggled to find peace. It finally came with her Qazi training, during which she learned exactly what Islam had to say about women.

If any Muslim man points a finger at her for living alone and being an activist, or questions why she left her husband, she can quote the Qur’an back at him.