In December 1933, an air race from Cairo to Alexandria was held. The first plane to cross the finish line was piloted by a 26-year-old woman named Lotfia El Nadi, Egypt’s first female aviator.

To have a flying career was not easy for Lotfia. Her father had rejected the idea, but she did not despair. She persuaded the director of the Institute of Aviation to let her work, free of charge, as his secretary — in exchange for flying lessons. As she later explained, “I learned to fly because I love to be free.” 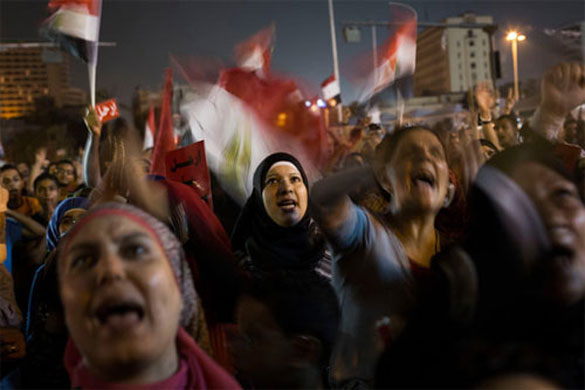 Lotfia became a hero and a national treasure in the eyes of Egyptians. Women saw her as an inspiration in their struggle for equal rights, and many young women followed her example by applying for flying lessons. Egyptian women made advances in equality throughout the period of the monarchy, which ended in 1953. After the republic of Egypt was established, under Gamal Abdel Nasser, women continued to advance, achieving positions in universities, Parliament and the senior judiciary.

The historical advancement of Egyptian women contrasts sharply with the results of a new Thomson Reuters Foundation survey that found Egypt ranked overall worst among 22 Arab countries for discrimination in law, sexual harassment and the paucity of female political representation. Why do Lotfia’s granddaughters suffer from problems today that she managed to overcome 80 years ago?

After the 1973 war in the Middle East, the price of oil shot up. This gave Gulf states unprecedented power, while the economic shock forced millions of Egyptians to emigrate to work there. Many of these Egyptians came home having absorbed radical Wahhabi values.

Egypt’s tradition of moderate Islam recognized women’s rights and encouraged women to study and work. By contrast, for Wahhabis, a woman’s job is to please her husband and provide offspring. Wahhabi preachers promote female genital mutilation, to control women’s sexuality. A woman must cover her body completely and may not study, work or travel. She cannot even leave the house without her husband’s permission.

Wahhabism has influenced all Islamic societies and movements, including Al Qaeda and the Muslim Brotherhood. As it spread in Egypt, more women started to wear the Hijab, or head scarf. But this did not create a virtuous society; it led to the reverse.

Until the end of the 1970s, many Egyptian women still went without head scarves, wearing modern Western-style dress, yet incidents of sexual harassment were rare. Now, with the spread of the Hijab, harassment has taken on epidemic proportions. A 2008 study from the Egyptian Centre for Women’s Rights revealed that 83 percent of women interviewed had been subjected to sexual harassment at least once, and that 50 percent experienced it on a daily basis.

Why is it that men did not harass Egyptian women when they wore short skirts but that sexual harassment has increased against women in head scarves? When ultraconservative doctrine dehumanizes women, reducing them to objects, it legitimizes acts of sexual aggression against them.

The Mubarak regime had various differences with the followers of political Islam, but the two camps converged in their contempt toward women. In spite of some formal reforms instigated by Suzanne Mubarak, who wanted to appear as an enlightened first lady, the Mubarak era witnessed deterioration in women’s rights.

Even so, it was not until 2005 that sexual harassment became an organized form of retribution against Egyptian women who took part in anti-Mubarak demonstrations. The security apparatus paid thugs, known as “beltagiya,” to gang up on a woman attending a demonstration, tear off her clothes and molest her. This sexualized form of punishment continued through the period of the military regime and into the Brotherhood’s rule.

On Dec. 17, 2011, during a demonstration against the Supreme Council of the Armed Forces near Tahrir Square in Cairo, soldiers pulled a female protester’s clothes off and dragged her along the ground, stomping on her with their boots. A video of the attack went viral, eliciting the sympathy of millions. Solidarity committees were formed, and the victim of the attack became an icon for Egyptian women. But the Islamists, at that time allied with the council, mocked the victim, blaming her for not staying in the home — as was seemly for a respectable woman.

During the revolution, millions of Egyptian women went out and bravely faced snipers’ bullets, but those who gained power played down their bravery and attempted to sideline them. After the 2012 election that brought the Muslim Brotherhood to power, there were only 10 female members of Parliament out of a total of 508. President Mohamed Morsi’s later attempt to rewrite the Egyptian Constitution would also have removed the only female judge on the Supreme Constitutional Court.

In short, the Islamists strove to eradicate the gains Egyptian women had made. They tried to overturn the law punishing doctors who carried out female genital mutilation, and refused to consider the marriage of minors as a form of human trafficking by claiming that Islam permitted a girl as young as 10 years old to be married.

Women’s rights are a bellwether of the current conflict in Egypt. The revolutionaries are fighting for equality, whereas the reactionary forces of both the Brotherhood and the Mubarak regime are trying to strip women of their political and social rights and make them subject to men’s authority.

The conflict will eventually be resolved in favour of women because the revolution represents a future that no one can prevent. In 2002, Lotfia El Nadi died at age 95. Shortly before her death, she said: “I don’t recognize Egypt as it is now, but the Egypt I knew will return. I am certain of that.”

Alaa Al Aswany is the author of “The Yacoubian Building.” This article was translated by Russell Harris from the Arabic.