April 2014! It hangs like a Damocles’ sword over the Indian sub-continent. While Afghans may be the immediate beneficiaries, the ramifications of what April 2014 denotes will be felt far and wide – in Pakistan, India, and maybe even further. April 5, 2014 Afghans will go to the polls to decide their future against a resurgent Taliban. And in 2014 the USA will be withdrawing its troops from the country, leaving the precarious security only in the hands of local forces. 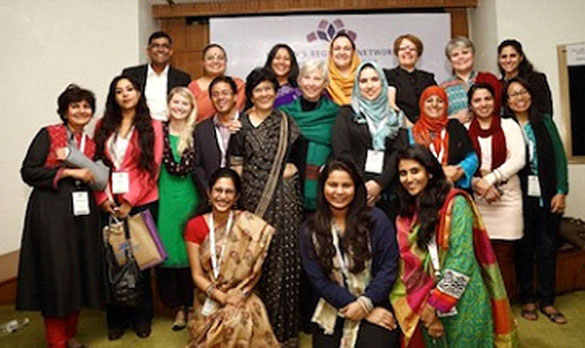 While the entire subcontinent is bracing for April, women in Afghanistan, Pakistan, and India have formed a network that cuts across countries and acts as a pressure group to promote peace in the region. The Network has their eye on the impending Afghan elections. The mission of the network reflects the regional solidarity among South Asian women and they seek to act as a pressure group on the Afghan government to ensure that it includes women’s voices in any peace and reconciliation process.

Afghanistan, Pakistan and India are organically linked through ethnicity, geography, and history. They are divided politically by the avarice of big power politics. Governments understand this and are gearing up, each in its own way. They are making some plans overt, and some less so. But what about the people of the region, and specifically what about the women? Are their lives as interconnected? Are their destinies also entwined with each other?

At first glance it may not seem so. Tribal women, resisting the usurpation of their lands by a South Korean industrial giant seem to have little in common with Baloch women marching to Karachi to demand knowledge of the whereabouts of their male relatives who have gone missing. Women in the picturesque state of Indian Kashmir, who have learnt to live with the ubiquitous army, seem far removed from Afghan women who had to give up lucrative jobs in the security services for lack of toilet facilities.

Yet there are other, sadder issues of gender equality that underscore the connectivity of the region. According to the World Economic Forum’s 2013 Global Gender Gap report, Pakistan is the second worst country in regards to gender equality and India has the low rank of 101 out of 136 countries. While Afghanistan was not included in the report, according to the United Nations, 87 percent of Afghan women are victims of domestic violence.

In Afghanistan, 87 percent of women are also illiterate and one in eleven women dies in childbirth. India, meanwhile, has one of the highest maternal mortality rates in the world, while in Pakistan between 500 and 1,000 women are killed in honor killings each year.  These commonalities were the raison d’etre of the Women’s Regional Network, says Rita Manchanda, Research Director of the South Asian Forum for Human Rights India and one of the founding members of the network.

In 2011, leading women’s human rights defenders and researchers came together in Kathmandu, the picturesque capital of Nepal – people like Najla Ayoubi, a former judge in Afghanistan who had seen members of her family exterminated by the Mujahedeen and is now an active women’s rights defender; and Kishwar Sultan from Pakistan, a famous human rights defender who is the director of Insaan Foundation, an organisation that works on gender equality, women’s empowerment and child rights. Not surprisingly, the idea for the network emanated from women in the USA committed to international women’s solidarity. Patricia Cooper, a former Fellow at the Weatherhead Center for International Affairs at Harvard University, serves on the board of numerous organizations and institutions on gender and women’s empowerment. Cooper visited the three countries and saw the commonalities. She joined Manchanda, Ayoubi, and Sultan in Nepal and thus was established Women’s Regional Network.

According to Manchanda, the rationale was to engage in transformative politics, which is the belief of all its members. “On their own, neither the State nor the private sphere can be relied upon to guarantee women’s physical survival and freedom from violence, their safety nor guarantee fair and impartial justice. Therefore, it is even more important that women’s civil society organizations across the region have access to the skills and the resources they need to address the multitude of threats facing women inside and outside their homes.”

For Afghan women this translates into a great concern, as the oppression of women under the Taliban is still fresh in the world’s memory. And it is this Taliban that the Afghan peace process seeks reconciliation with.

Women’s security, conflict and peace is a very real concern in India and Pakistan too. There are a number of armed insurgencies in India. India is also home to ‘development’ conflicts – conflict that has risen between the local populace and the state or corporate entities over the appropriation of land for industry. An insurgency is going on in Pakistan as well, which also has its own homegrown Taliban whose authority runs across a swathe of the country. Inbuilt structural gender discrimination in all these countries automatically translates into greater vulnerability of women in all situations.

The United Nations Security Council Resolution 1325 mandates that women be involved in any peace process; but in South Asia, women’s voices are missing in almost all peace processes. Thus the mission of the network is “…. to both strengthen the security of women and to enhance women’s leadership to initiate and take action in preventing conflict, developing solutions to eradicate corruption and work collectively towards building peace across the region.”

The very first initiative that the network launched was to conduct ‘community conversations’ (CCs) in different sites of conflict in each of the three countries. As Manchanda shared at a November 2013 Women’s Regional Network meeting in New Delhi, The Network is especially concerned with the inter-linkages between security and extremists; and between corruption and militarization, including the militarization of aid and development as it impacts women’s lives. ‘Community Conversations’ that focused on militarization, security, and corruption were held in eight of the worst affected provinces of Afghanistan; in Swat and Balochistan in Pakistan; and in Jammu and Kashmir, Odisha, and Tripura in India. As Ayoubi points out, in Afghanistan the key finding from the CCs was that there was a direct relation between security, corruption, and militarization of aid – each nurtured the other.

Bushra Gohar – a dynamic political activist of Pakistan, a former member of parliament, and Central Vice President of the Awami National Party, says that the CCs in Pakistan revealed that the presence of the Taliban in Pakistan posed a huge concern for women. In fact, Pakistan’s experience with the Taliban has been ‘worse’ than that of Afghanistan because when the Taliban took over Swat, they immediately went about conducting public beheadings and hangings. They punished women on charges of infidelity by stoning them or beheading them.

The November 2013 discussions in New Delhi reinforced the same. In the eastern Indian state of Odisha, women who had been at the forefront of a struggle against what they saw as illegal land acquisition by the South Korean corporate giant Posco, faced ruthless oppression at the hands of the police.

Yet, South Asian women have always been strong and known for their agency. This was revealed in these community conversations. Women bore the brunt of the struggles and burdens – and in conflict zones or under increased militarization, domestic violence against women also increased adding to their vulnerability inside and outside the home. But they also remained the main nurturers, demonstrated great courage and resilience and helped preserve the social and community fibre.

The Women’s Regional Network has been established to document the voices of such women, to record their contributions, to include them in peace processes initiated and engaged in their name, and to link them with one another to form a trans-border solidarity.

Afghanistan however is of immediate concern to the network. Unfortunately, a planned election mission was cancelled this week because of escalating election violence in the region. “We will definitely make a statement regarding women’s security,’ Manchanda tells me. For now that will have to be the extent of the pressure that the network will assert. Women throughout the region are hoping that all turns out well.

Aditi Bhaduri is an independent journalist and researcher based in India. With a background in international relations, specializing in the Arab-Islamic world (specifically the Israel-Palestine conflict), Russian linguistics, displacement and gender, she began her writing career by covering the Middle East for the Indian media. Currently Aditi’s work focuses on conflict, peace, displacement and gender. She acts as a gender consultant to various NGOs and started the Human Rights for Beginners program in schools in her native city of Kolkata. Aditi is also a member of several civil society initiatives in India and was on a Rotary Goodwill Exchange Program to the USA.

Aditi’s work has been published in both Indian and foreign print and electronic media. She was awarded the UNFPA-Population First LAADLI National Media Award 2008 for gender sensitive reporting and the Sarojini Naidu Prize for 2011 by The Hunger Project for Best English Language Reporting on Women.