Several years ago, an art dealer friend had a Renoir painting available for sale, a portrait of a young woman in half-profile, dressed in a pale frock and with a blue ribbon in her hair.

It was an expensive work of art, and so it took time to find a buyer; but eventually one woman fell so in love with the painting she was more than happy to pay the exorbitant asking price. A deal was made. But as my friend began to fill out the paperwork, the buyer paused.

"Do you think," she said, "that I could repaint the ribbon? It's not quite the exact blue to match my drapes." 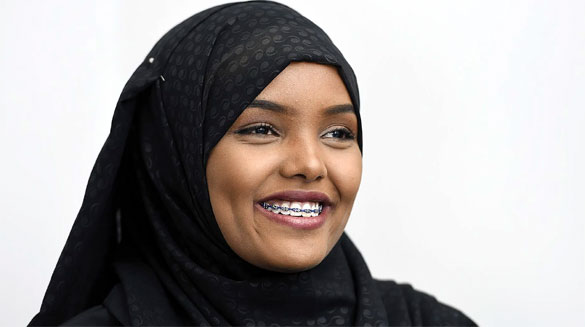 Halima Aden's face has been everywhere, from newspapers to magazines to television here and abroad.

I thought of this story recently when I read that Muslim model Halima Aden, who broke barriers by being the first supermodel to wear hijab and, later, to pose in a Burkini for Sports Illustrated, had decided to end her blossoming career. The fashion industry, she said, had failed to accommodate her needs; and joining a chorus of other Muslim women in the field, she called on designers, fashion editors, and others to remake themselves to fulfil the demands of Muslim (read: Hijabi) women.

In announcing her decision on Instagram, Aden condemned photo shoots for which she had worn outfits that, while conforming to the standards of "modest dress," were "not me." Of the American Eagle campaign for its popular denim hijab – a creation that sold out in all its stores – she complained: "Why did I let them put jeans on my head when at the time I had only ever worn skirts and long dresses?"

"I can only blame myself for caring more about the opportunity than what was actually at stake," she added. "I blame myself for being naïve and rebellious. What I do blame the industry for is the lack of MUSLIM women stylists.... I did good, but that isn't enough. We gotta have these discussions in order to change the system truly."

Aden is not the only Muslim woman in fashion to voice her objections to the industry that has rewarded her enviable career with fame, fortune, and a voice. Speaking to the Daily Beast soon after Aden's retirement, model and stylist Saniyyah Bilal complained of having to dress in a bolero jacket the way its designer had wanted it to be worn, with the neckline clearly visible. When the designer refused to let her close the collar, Bilal waited until she was set to walk the runway, then pinned it closed to suit her own views of modesty. It was her way of repainting the ribbon to suit the color of her drapes. 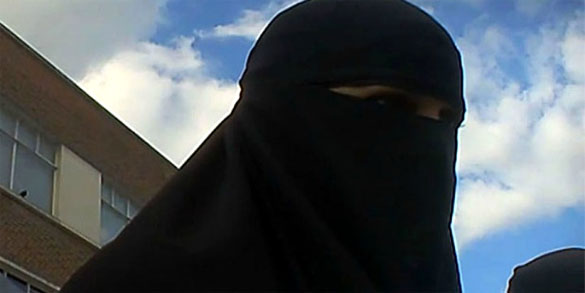 A Muslim woman in a hjiab. Photo: UK Channel 4/Screenshot.

But "a clothing designer is an artist who makes clothing to fit their style and their vision," says Yasmine Mohammed, an ex-Muslim and author of Unveiled: How Western Liberals Enable Radical Islam. "A model's job is simply to showcase the clothing for the audience. It's incredibly entitled and disrespectful for a model to think that their personal choices should impact another person's work."

Farhana Qazi, the first American Muslim woman to join the U.S. government's Counter Terrorism Centre and the author of Invisible Martyrs: Inside the Secret World of Female Islamic Radicals, agrees: "Western fashion...doesn't need to conform to Muslim fashion," she said in a recent e-mail. "There is a wide platform now for Muslim/Islamic fashion which supports those in hijab and modern dress."

Most of this could be waved away had it not attracted so much attention and applause, even beyond her million followers on social media. Naomi Campbell, Gigi Hadid, Rihanna and other celebrities praised Aden's "integrity." CNN, the New York Times, the Daily Beast and others picked up her story. It was as if she had done something heroic, taken a bold, liberating stand for Muslim women around the world.

In fact, her actions contradict entirely the symbolism and purpose of the hijab: Modesty. With the same grandiose, self-promoting egoism with which she voluntarily stepped into the world of glossy magazines, posing seductively in form-revealing burkinis that advertised her beauty, she called for attention in announcing the end of her modeling career. "Look at me," she was saying. "Look at me."

And yet, the hijab is worn specifically to disguise a woman's beauty. "Look at me" is exactly what the hijab stands against. "The whole purpose of the hijab is modesty," says Mohammed, who founded "No Hijab Day" in support of women who have risked their lives by daring to remove their scarves in the face of laws or family rules that demand them. "The reason why it exists is because it aims to hide a woman from the view of all men who are not in her family. The idea is that a woman's being – her body and her voice – are awrah. That means, essentially, that they are private parts. Although I disagree entirely with the idea of hijab and misogynist reasons behind it, it's easy to see the blatant contradiction between wearing clothing for religious modesty purposes [and] strutting on a catwalk."

Moreover, the criticism these women hurl at the fashion world implies that Muslim women all wear hijabs, that there is somehow something discriminatory, even racist, about designers who do not incorporate "modest" fashion in their lines. More, it suggests that women who do not cover their heads are somehow "too Westernized" – a condemnation some fundamentalist Muslim families have used as reason to beat or even kill their daughters as happened to 16-year-old Canadian Aqsa Parvez, beaten and killed by her father for her "Westernized" clothing and behavior.

And yet none of the women gracing the covers of Turkish Vogue or Elle over the past two years, for instance, wear hijabs or veils. Rather, these women represent the Muslima who is comfortable with her spiritual life and her religion, regardless of what she does or does not wear.

By contrast, in presenting the Hijabi as the model for Muslim girls, Aden and those like her are echoing the viewpoint of extreme and conservative Muslims, suggesting that it is the covered Muslima, not the Westernized liberal woman, that a young Muslim girl should aspire to become, that this is the ideal. Secularism is not merely rejected, but denounced.

This is potentially dangerous stuff: as a ground-breaking and highly influential model, Aden and others seeking to "change the system" arguably risk steering younger Muslim girls towards a patriarchal and conservative religious ideal – and the ideologies that accompany it.

Ultimately, my friend cancelled the Renoir sale, refusing to allow this woman to impose her style and her will on an icon of our culture.

The fashion world should do the same.

Abigail R. Esman is a freelance writer based in New York and the Netherlands, and the author of Rage: Narcissism, Patriarchy, and the Culture of Terrorism. F