2.    The wisdom of the Holy Quran is beyond humankind’s imagination.

3.    The verse, Surah Al-Fateha, is a complete request letter to Allah in the form of a Dua (supplication).

4.    Recitation of Surah Al-Fateha, many times a day, during the Namaz bestows upon us the righteous path that leads to a good life in here and hereafter.

Anas reported that Allah's Messenger visited a person from amongst the Muslims to inquire (about his health) who had grown feeble like the chicken. Allah's Messenger said: Did you supplicate for anything or beg of Him about that? He said: Yes. I used to utter (these words): Punish me earlier in this world, what Thou art going to impose upon me in the Hereafter. Thereupon Allah's Messenger said: Hallowed be Allah, you have neither the power nor forbearance to take upon yourself (the burden of His Punishment). Why did you not say this: O Allah, grant us good in the world and good in the Hereafter, and save us from the torment of Fire. He (the Holy Prophet) made this supplication (for him) and he was all right. — Muslim ibn al-Hajjaj, Sahih Muslim

In the light of the above mentioned Hadees, it can be said that the recitation of Surah Al-Fateha, many times a day, during the Namaz, will Insha’Allah bestow upon us the righteous path that leads to a good life in here and hereafter.

The Holy Quran is a Book revealed by Allah the Most Gracious with knowledge of every sphere of human life in here and hereafter.  This divine Book is an encyclopaedia of all the requirements a man could imagine. It is a guidance book till the time it is taken back by the Almighty Creator to the skies again. 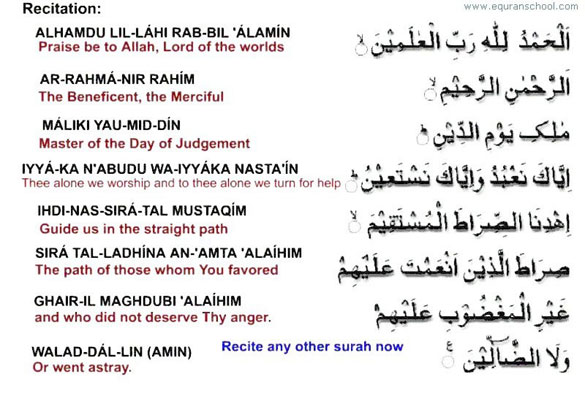 The status and the importance of the Surah Al-Fateha can be gauged from the fact that Allah, the Most Gracious reveals an Ayat describing its importance in the Holy Quran, ‘And We have certainly given you, [O Muhammad], seven of the often-repeated [verses] and the great Qur'an. (Ayah al-Hijr: 87)’

Surah Al- Fateha is called ‘Mother of the Holy Quran', (Ummul Quran). The Arabic word ‘Fateha’ has its root in the word ‘Fatah’ that means 'the opening'. Surah Al-Fateha is the opening verse of the Holy Book, the Quran. The mother verse of the Holy Quran has all the positivities of the divinity that is needed to guide the human being on to the righteous path. It provides a feeling of standing in front of Allah and requesting Him for guidance on the righteous path. Consider the English translation of the Surah to understand its beauty and importance:

All praise is for Allah—Lord of all worlds, the Most Compassionate, Most Merciful, Master of the Day of Judgment. You ˹alone˺ we worship and You ˹alone˺ we ask for help. Guide us along the Straight Path, the Path of those You have blessed—not those You are displeased with, or those who are astray.  — Dr Mustafa Khattab

When we recite Surah Al-Fateha in our Namaz or otherwise, we address Allah, the Almighty as, ‘All praise is for Allah—Lord of all worlds, the Most Compassionate, Most Merciful, Master of the Day of Judgment to invoke His mercy before presenting our supplication.

The Ayat, ‘Guide us along the Straight Path, the Path of those You have blessed—not those You are displeased with, or those who are astray’ is a Dua for guidance on to the righteous path on which He guided all the prophets, the companions of the noble Prophet Muhammad (SAW) and all the Auliya and righteous people.

Thus, the recitation of Surah Al-Fateha opens the door to Allah’s mercies and rewards with the guidance on to the Serat ul Mustaqeem, ‘The path of those upon whom You have bestowed favour…’ (Al-Fateha: 6).

As narrated by Hazrat Abu Hurairah (R.A) that the Messenger of Allah (S.A.W.) said: "….... Allah, the Most High said: I have divided the Salat between Myself and My slaves into two halves. Half of it is for Me, and half of it for My slave, and My slave shall have what he asks for. My slave stands and says: All praise is due to Allah, the Lord of All that exists." So Allah, the Most High says: "My slave has expressed his gratitude to Me." He says: "The Merciful, the Beneficent. So he says: "My slave has praised Me." He says Owner of the Day of Reckoning. He says: "My slave has glorified Me. And this is for Me, and between Me and My slave: It is You alone whom we worship and it is You alone from whom we seek aid" until the end of the Surah "This is for My slave and My slave shall have what he asks for." So he says: Guide us to the straight path. The path of those upon whom You have bestowed Your favour, not those with whom is Your wrath, now those who are astray." (Sunan An-Nasai: 910)

Hazrat Abu Hurayrah (R.A) said that the Messenger of Allah (SAW) said: “Al-Hamdulillah is Umm Al-Quran and Umm Al-Kitab (the Mother of the Book) and the seven oft-repeated.” (Tirmidhi: 3124)

It was narrated that Aishah (R.A) said: “I heard the Messenger of Allah (SAW) say: ‘Every prayer in which the Ummul-Kitab (the Mother of the Book) is not recited is deficient.’” (Sunan Ibn Majah: 840)

It was narrated by Ubada bin As-Samit (R.A) that Allah's Messenger (SAW) said: "Whoever does not recite Al-Fatiha in his prayer, his prayer is invalid." (Sahih Al-Bukhari: 756)

Abu Hurairah (R.A) narrated the Messenger (Pbuh) of Allah saying, “The chapter commencing with “All praises and thanks are due to Allah the Lord of the Worlds” is the Mother of the Quran, the Mother of the Book, the Seven Oft Repeated Verses and the Great Quran.” (Tirmidhi)

“While the Messenger of Allah was sitting with Jibril he heard a creaking sound above him. Jibril looked up and said, “This is [the sound of] a gate that has been opened in heaven today and has never been previously opened.” Then an Angel descended through it and came to the Prophet and said, ‘Rejoice in the good news of two lights that have been given to you such as no Prophet before you has been given. [They are] Surah Al-Fatiha and the concluding [two] verses of Surah Al-Baqarah. You will never recite a word from them without being given the blessings they contain.’ “

Anas (R.A) reported the Holy Prophet saying as “Should I not inform you of the most noble and excellent part of the Quran?” He then recited “All praise and thanks are due to Allah, the Lord of the Worlds” (An Nisai)

Prophet Muhammad (SAW) called Surah Al-Fateha with various names, two of them are Ash-Shifa (The Cure) and Ar-Ruqyah, (The Spiritual Cure). The traditions mentioned below are proof of Surah Al-Fateha being a source of cure for illnesses. One who recites this Surah comes under the protection of Allah, the Almighty. Consider Prophet Muhammad Pbuh’s traditions regarding Surah al-Fateha being a source of cure of illnesses:

Abu Sa’id reported that the Messenger of Allah said: “The Opening of the Book is a cure to every poison.” (Ad-Darimi)

Abu Sa’id reported that after he had recited it to cure a person who had been bitten by a scorpion, the Apostle (Pbuh) of God asked him, “…And what made you to know that it was a Ruqyah.” (Bukhari)

It is narrated by Hazrat Abdul-Aziz bin Suhaib (R.A): "Thabit Al-Bunani and I entered upon Anas bin Malik, and Thabit said: 'O Abu Hamzah! I am suffering from an illness. So Anas said: 'Shall I not recite the Ruqyah (one of the names of Surah Al-Fatiha) of the Messenger of Allah over you?' He said: 'Why, yes.' He said: 'O Allah! Lord of mankind, removed the harm, and cure (him). Indeed You are the One Who cures, none cures except you, a cure that leaves no disease.'"  (Tirmidhi: 973)

The universe has many mysteries that are difficult to understand for a common man. There have been people of wisdom and intellect that have tried their best to understand the Holy Quran and tell the people about its magnitude.