The Whys and Wherefores of Muslim Backwardness in India

The Impact of British Rule on Muslims

The British rule was an advantage to the Hindus, as they were interested to learn from them whatever would contribute to their advancement.  They utilized   the many opportunities that the British offered in all walks of life. By getting educated in western education and culture, they became reliable subjects in the eyes of the British, and by learning the English language, they were offered services in the Government. 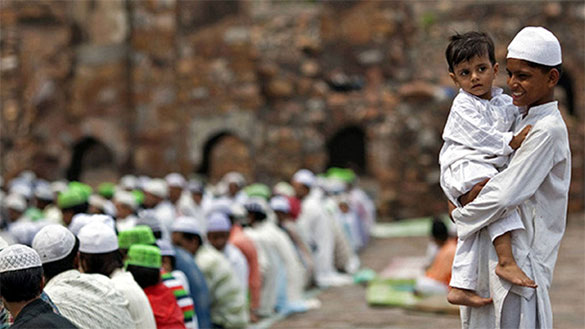 The East India Company passed the Permanent Land Settlement Act (1793) whereby it created a new class of Hindu collaborators, called gomashtas, or zamindars, who overcharged Muslim peasants, even during hard times, such as famines.  The Hindu revenue-collectors, turned overnight into landowners at the expense of the poor Muslim peasants.

The Muslims did not learn the English language, and thus denied themselves opportunities of material as well as intellectual progress. Material, because Government jobs were open only to English-knowing persons; intellectual, because the entire body of Western knowledge and learning was shut out from them.

Some historians attribute this Muslim backwardness to the fact that Muslims were not pre-disposed to absorb “alien ideas, methods and language of the new rulers”; thus, they failed “to grasp the opportunities available in the new structure of government”

To avoid coming under the influence of the new culture, they clung tenaciously to the fundamental teachings of Islam and most of them prevented their children from attending British-patronized educational institutions throughout the different Indian provinces.

Muslims fell into a sense of humiliation and grief at the loss of their power, and as a result, they developed bitter feelings towards the British. This bitterness resulted into the 1857 Revolt that shook the Company’s rule to its very foundations.

The Impact of the First Indian Revolt on Muslim Community

Both Muslims and freedom-loving Hindus did participate in the Great Revolt, and in spite of that, the British decided to revenge themselves on the Muslim community, as the latter were regarded as the bona fide fomenters and the most beneficiaries of the uprising.

This anti-Muslim feeling was well reflected in the harshness of British reprisals towards the Muslim community immediately after the Revolt was put down. Besides the expropriation of Muslim landowners, some contemporaries bear witness to many instances of barbaric acts of ruthless vengeance being inflicted indiscriminately by British soldiers, with the connivance of their superior officers, on ordinary Muslims  “mass massacres, indiscriminate hangings, inhumane tortures and large scale confiscation of properties were some of the means adopted by the British for the purpose”. To add insult to injury, even Hindus, who had an active hand in the events of 1857, pointed an accusing finger at the Muslim community and joined hands with their new masters, namely the British, in their anti-Muslim campaign.

Since the early days when the East India Company imposed its dominion over the Subcontinent, the British had looked down on the Muslim community and saw Muslims as their bona fide adversaries

The events of 1857 were an excuse for the British to get rid of the last vestiges of the Mughal Empire once and for all, as well as curb the Muslim influence in the Indian society. Muslims faced extreme discrimination in all spheres of day-to-day life, and particularly in Government employment. The post-Great Revolt period was probably the gloomiest period in the history of the Muslim community in the Indian Subcontinent.[1]

During the 19th and 20th centuries, Christian missionaries and colonial rulers such as the British opened schools that were based on a Western educational model and offered courses in English, science and technology.

Muslims who continued to choose Madrasas over other schools found that they lacked the training needed for well-paid jobs.  One drawback is, many Madrasas refused to integrate nonreligious subjects into their curricula. As a result, a dual system of schooling became the norm: one Islam-centred, the other Westernized.

Why Do Parents Choose Madrasas?

There are thousands of madrasas in the Indian subcontinent, Arab countries and African Muslim countries. There are about 30,000 Madrasas in each country like India, Pakistan and Bangladesh. Most graduates from Madrasas find poorly paid jobs in Madrasas, mosques or shrines of saints, a few others in farming. Only 3 percent attain a higher level of socioeconomic development.

The majority of Muslim families want Madrasas to offer technical courses and vocational training. However, the religious leaders who could approve changes are “set against the modern education.”

Such Madrasas contribute to a vicious circle of poverty. Free government schools could serve as an alternative, but, perhaps due to their low quality of instruction, nearly three-quarters of Muslim families expressed the opinion that if they had the financial means to do so, they would choose fee-based, private, nonreligious schools. Greatest problem with Madrasas is they   emphasize rote learning over critical thinking.

Attitude of Muslims towards Western Education

The Muslims hated the   Western education   during the period of British India. The reason is they had hatred of the British in their taste and culture so that they had to keep a distance from Western education. And this led the community to doom.  The Muslims were very much stubborn in their religious belief, practice and worship. The majority of the Muslims were devoted to trade and commerce rather than to seek employment under any regime. The Muslim’s response towards the British can be divided into four categories:

1. One group of nobles sincerely considered friendship and alliance with the British indispensable for the continued existence of the Indian states and made it their policy to be friendly with the British.

2. Second group was highly impressed by the British and their culture that it sought to organize the affairs of State and the conditions of the society on British lines.

3.  A third group was loyal neither to the state nor to the British Government and followed a policy which, in its view, best suited its own personal and selfish interests.

4. A fourth group which was totally opposed to British dominance and the British connection.

Muslims in Southern India showed positive response towards English and Western sciences, while the Muslims of Northern India, to some extent also Hindus, refused to accept Western learning.

The British then onwards were highly cautious regarding Muslims.  After establishing their authority, the British began to destroy the financial strength of the Muslims.

As stated earlier in 1793, the British passed the land Act, which adversely influenced the economic condition of the Muslims. They changed the relationship with the landlords, especially with regard to the Muslims, and closed the door to their landlordism.

In 1868, the   British government announced assistance for persons traveling to Europe for educational and scientific purposes.  Majority of Muslims living in northern India believed social contacts with Englishmen to be objectionable for their moral and religious integrity.  When Syed Ahmad Khan was elected an honorary Fellow of the Royal Asiatic Society of London in 1864, he decided to go to England himself to see the ways of the British in their homeland. After an extensive seventeen month stay   in England, Ahmad Khan returned to his home land on 2nd October, 1870 full of ideas and aspirations to lead his community to be on par with modern developments. While he was   in England, he visited the top universities such as   Oxford and Cambridge and certain private schools, including Eton and Harrow. These would serve as models for his own Muhammadan Anglo-Oriental College. After his return to India, Sir Syed started to put into action his educational strategies in a scientific manner.  In 1920 the Muhammadan Anglo-Oriental College became Aligarh Muslim University, an institution that had a decisive impact on the course of Islamic polity in India as well as on the educational history of India.

The Muslim community has not recovered ever since the historic defeat of Indians in 1857 Rebellion against the British.  Today they are facing hard social, educational and political conditions. Muslims in India have a poor human development status.

Sachar Committee has found that Muslims are not only the victims of poverty, but have come to accept inequality and discrimination as their inevitable fate. The glaring   problem is the absence of committed and authentic Muslim leadership in pre and post independent India. [3]

As stated above Muslims in India are divided on political lines and have little or no national leadership. They are marginalized in India’s civil services and public administration. The Muslim community is also utterly under-represented in the field of journalism. Moreover, Muslims in India have bleak entrepreneurial ambitions.

Political representation of the Muslims stands extremely low at six-to-eight per cent while their population in India is over 14 per cent.

And religious organizations like Jamaat-e-Islami Hind, Jamiat Ahl-e-Hadees Hind, Sunni Dawat-e-Islami, and others, are concerned with   the way Islam should be practised by the community.

The top bureaucratic positions in the country namely the Indian Administrative Service (IAS), Indian Police Service (IPS) and the Indian Foreign Service (IFS) are frighteningly under-represented by Muslims. The estimated figure of Muslims in these services stands inexcusably low at two-three per cent.

Majority of the Muslims are not even eligible for these posts as very few of them are university graduates. Surveys show that about five per cent of Muslims in the country have successfully completed university education.

There are very few Muslim journalists of national prominence.

Few businessmen like Azim Premji of Wipro, Yusuf Hamied of Cipla, Shahid Balwa of DB Reality and a few others, are the few conspicuous Muslim names in the corporate world.

Education is a great solution to problems of poverty, sickness, and empowers the Muslim community. Universities like Aligarh Muslim University and Jamia Millia Islamia, must be able to produce some of the preeminent professionals in different fields who would not only care for their individual well-being but would also show attentiveness for the community at large.

The religious leaders must pay attention to the need of the hour to reform the various education, social, and cultural institutions they run. Just religious education is not enough, but also modern and secular, must be stressed.

Therefore, it is the responsibility of the well-educated and instrumental members of the community to push for these reforms. They should make sure there is a fall in dropout rates at all academic levels. The prosperous members of the community should institute scholarships and other aides to ensure that deserving and talented young students do not drop out from school or university due to financial problems. It is time for the community members to show astonishing unanimity with each other for their own prosperity and welfare. [4]