The Muslims’ right to claim on space, after partition, was denied silently as well as violently. This led to the evolution of communal demography in Delhi. The Muslim population was forced to leave areas like Paharganj, Karol Bagh, Sabzi Mandi and the surrounding localities where they were in a minority. Muslims living in mixed areas of Old Delhi, including areas that were not directly affected by communal violence, also decided to take shelter either in refugee camps or at their relatives’ living in Muslim-dominated pockets. 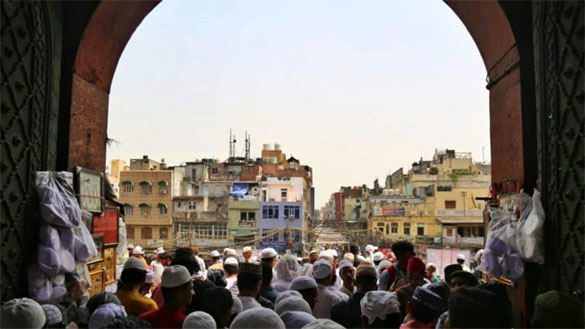 These spontaneous (sometimes forced) but always less organised forms of internal movement of Muslim populations to areas perceived to be ‘safe’ paved the way for the creation of an administratively unclear and politically provocative category called the ‘Muslim zones’.

There was also a grave risk that Muslim residents could be ‘pushed out’ of their areas as the ‘evacuated’ Muslim properties were to be allocated to Hindu and Sikh refugees. There were a number of incidents in which RSS workers and other right-wing Hindu political elements started threatening Muslim neighbours once an evacuee house was occupied by Hindu or Sikh refugees even in Muslim-dominated areas.

Nehru termed this a deliberate ‘pushing out’ of the Muslim population. The peace committees, voluntary bodies formed to promote communal harmony in times of violence, requested the government to stop rehabilitation of Hindu and Sikh refugees in Muslim-dominated areas.

The city space in Delhi was thus finally reconfigured on the basis of communal identity. Nehru strongly supported this as a temporary arrangement to ensure the safety and protection of Muslims. It was also done to secure the rights of Muslims who were now called ‘evacuees’ after moving from their houses to refugee camps.

The government made special arrangements at the later stage for the transfer of Muslims from mixed and Hindu-dominated areas to these ‘Muslim zones’. Few Muslim households situated in mixed areas were also forcibly evacuated by the authorities. They were told to vacate their houses and move to designated areas for their safety. After hectic deliberations of the emergency committee, chief commissioners and military officers were directed to devise schemes for additional protection and more intensive patrolling of these selected Muslim areas in order to restore confidence amongst Muslims in the city. 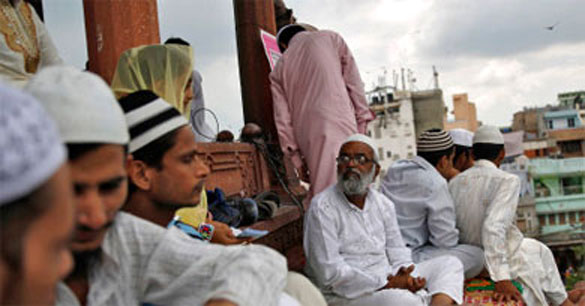 The notion of ‘Muslim zones’ came into being in this way as ‘risk management’ tactics. In that sense, the areas for the first time came to be clearly arranged, quite involuntarily, on the lines of established categorisation: ‘Hindu-dominated’, ‘Muslim-dominated’ and ‘mixed’. In fact, the numerical strength of the community in crisis became an important administrative principle in the official discourse.

The Muslim zones had no ‘legal’ sanction. In fact, they came into being by an order issued directly by the national government during the state of emergency.

The local government bodies, which had a number of clerks and Babus (government servants) sympathetic to the RSS, implemented the official orders selectively. In the wake of Partition and related violence, local officials clearly distinguished between Hamare Log (our people) and Pakistani Musalmans (Pakistani Muslims) when it came to prioritising between Hindu and Sikh refugee rehabilitation and Muslim resettlement. Azad made a powerful observation about the functioning of local bodies in Delhi. He noted that the administrative officers ‘were divided into two groups.

According to Azad, Sardar Patel declared his position by clearly differentiating between Hamare Log and Muslims during his discussions with Gandhi on many occasions. In this situation, the security of these zones largely remained the responsibility of the peace committees, which continued to guard evacuee properties during riots with the help of local residents and some refugees working as volunteers. It was only after prolonged deliberation that the local administration and police provided protection to these localities.

In the backdrop of this contest over refugee rehabilitation in Muslim concentrated areas, a new, powerful political metaphor—mini Pakistan— emerged, which became a stereotypical reference point in the years to come.

The Muslim zones were said to pose a ‘serious threat’ to internal security, especially when Delhi’s displaced Muslims started returning from refugee camps in 1948. The reversed migration of Muslims from Pakistan also contributed to the growing controversies around Muslim zones.

A long debate took place in Lok Sabha on 11 August 1952. Sardar Hukam Singh, an active Sikh politician from Punjab, raised the issue of Muslim zones of Delhi in the discussion. Although Muslim zones were outside the jurisdiction of the custodian of evacuee property, Singh highlighted the need to rehabilitate Hindu and Sikh refugees in the evacuee houses situated in Muslim zones. Singh argued that the ‘liberal attitude’ of the Indian government towards Muslims encouraged by ‘lofty ideals’ of the nation would lead to delay in the process of rehabilitation of Hindu and Sikh refugees. He said:

The custodian is not allowed to go there…. Possession has not been taken. The Jamiat is keeping possession of them and distributing as it likes. It is not permitted that any Hindu or Sikh might go inside that. There are Muslim zones for past five years and this is being continued up to date. What right have they? Is this loyalty to India that they can keep those doors closed? Those zones are closed to [sic] everybody. Even the custodian cannot go and take possession … people are lying on the streets, but these houses should be kept intact…!

He further argued that there were two sets of Muslims: ‘honest Muslims’ and ‘others’. An honest Muslim, according to him, ‘would [not] be threatened [by the custodian of evacuee property] and be obliged to leave this country’. But there are others, according to him, ‘who have no intention of living here’ but have stayed on only with the intention of strengthening Pakistan financially by keeping their properties and businesses intact on both sides.’ Hukum Singh insisted that this category of Muslims should be brought under the evacuee property law.

The partition of India transformed the fuzzy religious identity of space into concrete social and political categories. The Muslim zone and/or Muslim ilaqe, placed bizarrely in a wider secular Indian space, emerged as a powerful urban category in this period. The melting-pot thesis of Nehru saw these homogenised units as a temporary measure to protect the community and eventually integrate them into an India-specific secular-modern framework. But the sense of insecurity and fear of the community intensified. The description of Muslim zones as ‘mini Pakistans’ further established Muslim-dominated localities as strong markers of Indian Muslim identity.

Subsequent communal violence transformed these areas into ‘communally sensitive areas’ and, more generally, ‘Muslim ghettos’. The parallel discourse of ‘Hindu Rashtra’, which at least till the 1950s was expressed as the demand for Akhand Bharat, continued to refer to Pakistan in relation to Indian Muslim identity, marking Muslim residential areas as usurped territories within the sacred Hindu space. In later years, this allegation gradually started characterising Muslim-dominated spaces as symbols of ghettoisation, associating them with the alleged Muslim tendency of separatism.

The proponents of both ideas—secular India and Hindu Rashtra —expected the Muslim community to leave aside their religious identity and join the national mainstream. The question of Indian-ness of Muslim identity, in this sense, was never dissociated from the idea of Pakistan. For the Hindu nationalists, it was a tool to keep the discourse of Akhand Hindu Rashtra alive. On the other hand, protection of the Muslim minority, even after the making of Pakistan, became a political imperative for Indian secularism.

Original Headline: How ‘Muslim zones’ and ‘mini-Pakistans’ came about in Delhi