“A female security guard stopped me and asked if she could see my shirt. She said… “I am sorry sir you will have to take it off. It’s offensive””, reported the bemused journalist.

The official statement from the Parliament House read:

"Given the current climate, it was considered that the message on the T-shirt could be offensive to a number of staff and visitors, which is why the individual was requested to remove the T-shirt". 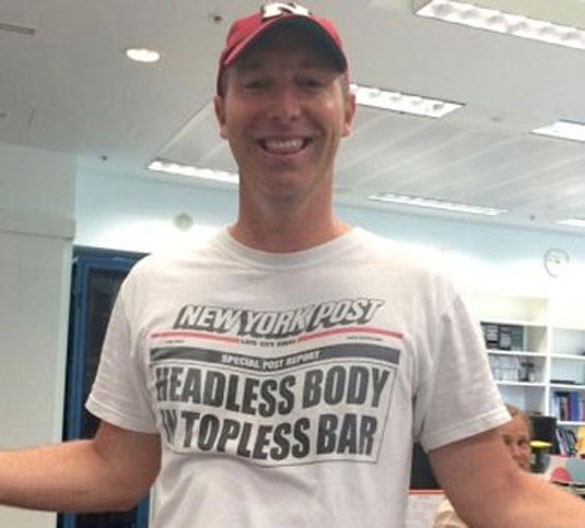 Nick Butterly, a reporter for newspaper The West Australian, was told to remove his T-shirt by the Federal Parliament House security officer in Canberra.

Interesting! That this incident should have taken place at one of the Western-world’s Parliament Houses where the right to ‘free speech’ is supposed to be enshrined!

This and other instances raise few questions for ordinary persons, as to how to interpret and reconcile the sensitivities with the “message” of Free Speech and still remain a law abiding citizen?

Although there are acts of parliament on the statutes books as a guide, but they are still being debated and constantly amended to meet the “climate”.

As can be seen, the print on the T-shirt is just a heading that was printed in the newspaper ‘New York Post’ of USA, long time ago. It has been taken humorously in most quarters, and the journalist thought it to be so too, as seen in the picture.

There was no condemning it then or now, as being obnoxious and offensive.

The two journalists, accredited to enter the House and to cover news from the Federal Parliament were, it is assumed, Australians citizens themselves and fully conversant with the values of Australians and indeed the Western world in which they live.

Then why the difference in the interpretation of a universal value by them and the security officer, all coming from a common background?

Could it be that the security guard being a female officer, felt offended that touched her sensitivities:

-        The reference to ‘Topless-ness’ of young females serving drinks to the customers of mixed sex. She felt it degraded the human female body, …or

-        The location? - That is, an august house of lawmakers where the leading lights of the nation, make laws affecting citizens’ daily lives, on all issues including moral and ethical nature, …and

-        That she was sensitive to the current climate and took notice of it. But as an officer responsible for keeping peace and harmony, she reacted politely?

The Economist once said in an article on Free Speech.-“free speech, which is in many places at best a wavering ideal.”

Freedom of Speech: The Sound Of Silence

But one thing springs to mind that cannot be ignored. The “value” of Free Speech and the “current climate” of violence committed against it. In particular and in relation to the Danish and French Cartoons violating the sensitivities of their Muslim minority community therein.

The parallel drawn is this: Those who reacted violently in those two countries were citizens of the countries, as much as those who drew and published the cartoons.

Can the violations therefore be said to be only a matter of degree of perception and hence the reaction is influenced by some other factors not taken into account?

The Jihadists in Europe called terrorists pitched their reaction at the highest level on the scale of zero to ten.

As opposed to that, the reaction of the security officer for the writing on T-shirt  was pitched at the lowest level of the scale, hence the politeness.

Yet the journalists thought their rights to free speech were violated as well as the security officer, coming from the same background thought her sensitivities were offended.

In the case of European cartoons, the subject matter was vilification of the Apostle Muhammad, and was aimed at a particular community, to provoke reaction. And it succeeded.

Yet this sort of satire in the West is not the exception by any means.

There are many insulting pictures and cartoons of other apostles round the world but no violent reaction had been ever undertaken by anyone; including Muslims who live there and claim those apostles as their very own!

But there is hope. Strangely coming from Australia!

For once the following picture of recent protest in Sydney Australia expresses the above claim of collective apostles in most eloquent way, and to their credit, sends an intellectual message to the world. 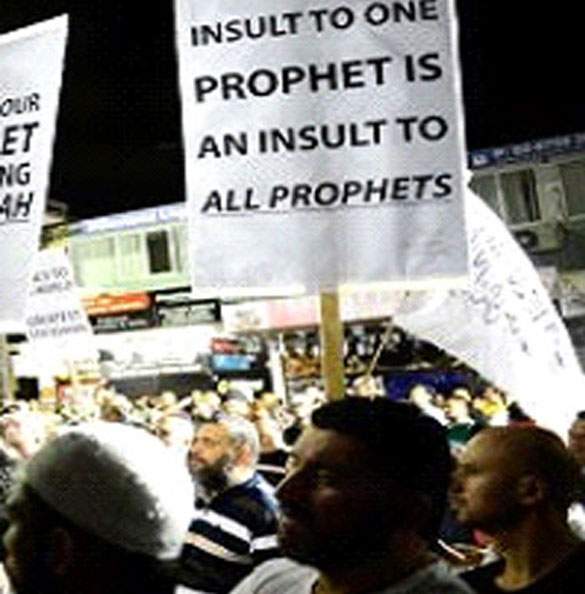 If such peaceful demonstration with thousands or millions of placards were held around the world where degrading paintings and cartoons of apostles are exhibited in art galleries and published in magazines; affairs for those concerned with such things might be different today.

Most importantly, that would be a battle –Jihad-- on level playing field: of ‘Pens against Pens’; hateful incitement against enticing excitement and repulsive monologue with one community against embracing dialogue with all humanity.

With so much wisdom there why do some Muslims then react violently in Muhammad’s case? And why do non-Muslims single him out as their target- person?

Is it because he is not considered by them as an apostle?

Or is it because the Muslims are “expected” to be incited and that is the “thrill” of provocation?

Does not seeking thrill have some potential of danger?

It is dangerous comparison to make, for there are so many variables. But it becomes quite obvious that religious sensitivities of a section of citizens cannot be ignored.

The reaction based on religion has the element of ignorance and is largely irrational and therefore dangerous. A wise thrill seeker weighs up this potential.

Rationality can only be instilled in a society by enlightenment and that, in turn only if based on broad knowledge-based education. No amount of Acts on statutes books will change that situation.

Religious education, if it can be called an education at all, has the narrowest focus and has insular field of vision. Throughout human history this has been the case.

Any civilised society therefore must take notice of sensitivities of its citizens, and their level of enlightenment in order to keep peace and harmony, as its first responsibility and priority.

Take notice it is said, but not be cowed under religious bigotry either. This is essentially the message that needs to be broadcasted. That is, if the message giver is sincere in promoting enlightenment and challenges the bigotry; as the European publications claim they are doing.

Their intention they say is just that, with challenge to establish harmony, coherence and peace. So it is worth repeating the saying -‘the path to hell is paved with good intentions’!

Pope Frances message seems to be just that. So he condemned both parties equally and quite rightly so.

He is obviously aware of the fact that ‘religions’ are practiced by human beings and human beings have varying sensitivities.

Pontiff’s awareness stems from enlightenment and perhaps he had studied psychology too.

This is not a requirement for priests, especially the Muslims; and particularly the leaders “guiding” the young emotionally charged so called jihadists in hurry to get to paradise to sample its pleasures.

The Jihadists; a term for Muslim terrorists who as criminals with covered faces; operate as Believers in the name of God and His Apostle Muhammad whom they venerate almost as a cult figure!

This is based on ignorance for it is in contradiction of Quran’s teachings!

In ignorance, the interpretation of the right to Free Speech and the message therefore gets derailed and leads to irrational conduct in human affairs.

The Apostle Muhammad is advised to tell his followers: “But indeed if any show patience and forgive (the provocation), that would truly be an exercise of courageous will and resolution in the conduct of affairs 42-43”.

Patience, forgiveness and courageous-will equates to wisdom and bravery. Not the irrational violent behaviour that results in harm and injury to humanity as a whole!

But are the Jihadists and their leaders really ignorant of the message of Quran, which has been there for fourteen centuries? It was not hidden for centuries in the caves, like the Dead Sea Scrolls!

Could it be that in the climate-- strategy of the time—is what dictates the conduct in the resolution of their affairs, irrespective of the message and the consequences of the reaction?

Cannot the same be said of the Danish and French cartoons inviting reaction of which they should have been aware of, particularly if their intentions are meaningfully ‘good’?

Thankfully the provocation in the surround of Australian Federal Parliament house in Canberra was not a religious affair, which saved us the day!