Embracing, Not Resenting, Their Differences

Ken and Sheema Karp met as college students in New York City and married in 1971. Sheema, the daughter of a Pakistani diplomat, teaches at the United Nations International School, and Ken is a professional photographer with his own business. The couple lives in Lower Manhattan. They have two adult children. A condensed and edited version of our conversation follows.

How did you meet?

Ken: We met at a party at a friend’s house while we were at Hunter College. I was there with a male friend and she was there with her friend. The guy I was with was actually hoping to take Sheema out, but I convinced him that because he lived in Brooklyn and so did the other girl, that he should go out with her instead. 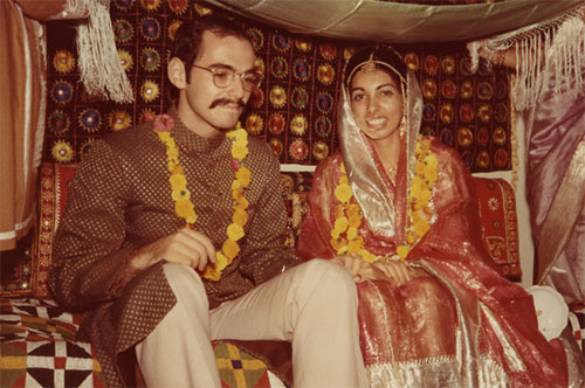 Ken and Sheema Karp married when they were 21.  About the first date, she said, "I was embarrassed because I had never been kissed, but he never made me feel inadequate."

Sheema: One was a very charming Irish guy, and one a very glum-looking fellow in all black, Ken. I was dressed in a sari, so neither of us really looked like who we were.

After that, we bumped in to each other at school. I was in western clothes and he didn’t recognize me. But a week later I got a call from him. I asked how he got my number and he said, “I got it from my friend because we both live in Manhattan, so we should be the ones dating.”

Ken: We went to Ratner’s. It was cold and I remember we took a bagel with us in her bag to eat later and when we pulled it out the thing had frozen.

Sheema: I was very awkward because I hadn’t really been on a date before; I came from a family where we didn’t date much. He was charming and pleasant. He put his arm out to escort me across the street and I thought, “I like this guy.”

Ken: We dated for two years and Sheema wanted a commitment. I was pretty young I had no idea what I was getting into, but I didn’t want to lose her.

How did your families feel about the marriage?

Ken: I’m Jewish and she was born in Pakistan and comes from a traditional family, but they were pretty open to me. There were discouragements because of our youth; we were both 21. My family didn’t come to the wedding and there was a 10-year period after that where I didn’t see them at all.

Sheema: His family was convinced I was an Arab and I said, “No, I’m Pakistani.” They could not reconcile what they saw as religious and cultural differences. Everyone thought we were too young. We didn’t have real jobs. We were both working in a day care centre. But all those people who told us not to get married are divorced now.

Ken: It was mainly my father. He had racist notions that I was going to be making my life harder. My mother just thought we didn’t know what we were doing.

Did it ever affect your relationship?

Ken: I did not have a close relationship with my family. If I had been a practicing Jew, I may not have made this decision. It never came between us. I was just hurt.

Ken: My parents didn’t come. We had a very small wedding in Sheema’s family’s apartment. It was very Pakistani. There were probably two dozen people.

Sheema: We had a black Muslim Imam from Brooklyn. My father was the Pakistani ambassador to Sudan and Madagascar, and one of his friends from the State Department was our witness. I wore my mother’s wedding gown and Ken wore the jacket my father got engaged in.

Did you reconcile with Ken’s folks?

Ken: After about 15 years, when we were about to have a child, Sheema said that we should try to contact them. I was pretty resistant to the idea — I was still quite resentful at their reaction to our marriage. But she persevered until I gave in, and I’m really glad I did.

Sheema: Now my children can say they knew their grandma and grandpa.

Sheema: It seems naïve now, but it was clear to me as a young girl that I was going to get married and that I would be supported. I never thought of my work as anything I would do for money. But then we were living in a dinky apartment on Kings Highway in Brooklyn and didn’t have much money. Ken has a traditional approach and took the idea of supporting me seriously, but it was overwhelming for him and I realized that this was real life and I would have to work. I got a job at a publishing company.

What about being parents?

Sheema: We married in 1971 and our son was born in 1985. I was nearly 35 years old. Ken said I could stay home if I wanted to, and I did until our daughter was in second grade, when I went back to work teaching middle school, and he took the full burden of the finances. Raising kids we never had a conflict. He was raised in a very secular way, so when I would sing songs or little prayers that I was raised with I wasn’t trying to replace anything he had been raised with. I was open to lox and bagels.

Why wait so long?

Sheema: We were a cowardly pair, I must say. I was in graduate school for a long time, and then I decided that I had to take my orals for my Ph.D. in English before I was a mother. I thought, “I cannot go up and do this as a mom.”

Ken: For me it was always in the future. I was obsessed about being financially stable.

Were things harder after 9/11?

Ken: Not that we experienced directly.

Sheema: It was a very difficult time. I had sixth-grade students and they were saying terrorists and Arabs and Muslims did this. I asked them if they thought all those people were the same and if they thought I was a Muslim. They all said emphatically no and I told them they were wrong. They all got up and hugged me.

Did you ever consider divorce?

Sheema: I don’t think so. There have certainly been moments of unhappiness. I was rather jealous as a young woman and didn’t understand the business of guys eyeing girls when they were married. I was naïve that sexuality is complex, and you can be loyal without being completely pure. We met so young that we really grew up together and had a lot of expectations of each other that, in retrospect, I’m surprised we actually met for each other.

Ken: There have certainly been times when it was hard to spend time together. I see myself to blame for these things. I had difficulties expressing feelings. I counted on her too much to provide the meaning of things. One of the difficulties of marrying so young is that you rely on the other person to make up the parts of yourself that are underdeveloped.

Sheema: I always felt like our differences were more from being a man and a woman than from cultural influence. I had to get to know what a male perspective in a marriage was like. I am more outspoken and he is breaking the stereotypes of what he thought a man should be. He wants to explore his creativity and not make all the decisions. These are good changes but not always easy.

Ken: We’re more a space-giving couple than a yelling-at-each-other couple.

Was relationship inexperience ever an issue?

Sheema: There was part of me that thought, “O.K., I’m going through life without having known anyone else,” and then I looked around and thought that was fine. I don’t regret it. We have this great intimacy, and I could never get involved with anyone just for exploration.

Ken: I explored a bit, but at a certain point it was not gratifying for me. I guess it’s always better if you work out all your personal problems before entering a relationship, but it’s not easy to make that call. I have no regrets.

What do you argue about?

Sheema: Small things that can turn into big things. He doesn’t delve. If something arises, and we’re going to take a trip, I want to anticipate everything and he’s like, “Let’s just do it.” I will want to know what time and where we are going. He is fine to just wander in the cold looking for a restaurant he thinks he remembers.

Ken: She always needed a sense of order and I was more comfortable in what she calls a “chaotic environment.”

What do you admire about each other?

Ken: She is incredibly expressive and intelligent. She has a unique view on the world because of her travelling experience, which I think was one of the things that first attracted me to her.

Sheema: I always felt that he was a very kind, good man. I liked the gentleness with which he approached my inexperience. Even on our first date, I was nervous because I had never really been out like that before. I was pleasant but awkward, and he was kind and entertained me almost the way you would a kid, but it put me at ease. At the end he asked to kiss me and I was embarrassed because I had never been kissed, but he never made me feel inadequate.

Ken was your first and only kiss? How do you know he’s a good kisser?

Sheema: Oh, he’s a good kisser. Trust me. Still, I only kissed one other person, or rather he kissed me. It was inadvertent, and I was rather embarrassed. I’m afraid I was was raised with a rather elevated and traditional notion of purity. Still, I can’t imagine kissing someone without the context of a close relationship. Well, maybe Brad Pitt.

I made sure to not raise my children that way. I wanted them to be comfortable with their bodies and to practice, not idealize, intimacy.