The modern lynching of George Floyd struck a global nerve. The image of a white officer crushing the neck of a Black man triggered a collective trauma that resonated in more than 50 countries and on six continents. 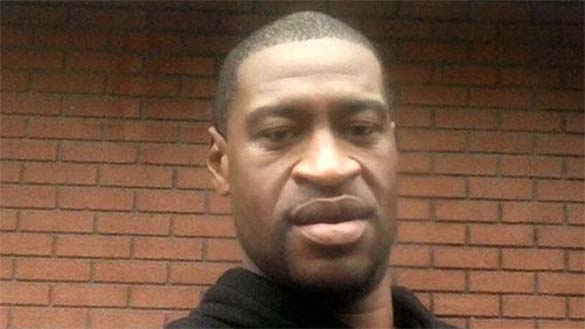 People poured into the streets and transmuted rage and raw emotion into a movement unseen in the United States for half a century. Police, showing their true colours, responded with tear gas, which hung oppressively in the air in an attempt to quell and suffocate the protesters' indignation. Floyd's last breath stoked the fires of global outrage.

A Muslim woman wearing a face mask inscribed with the words 'I cannot breathe' takes part in a Black Lives Matter protest in Cologne, Germany, on June 7, 2020 [Ying Tang/Getty Images]

"We revolt simply because, for many reasons, we can no longer breathe," Frantz Fanon prophetically said. His words capture this collective asphyxiation. In the case of Floyd and the protesters demonstrating in his honour globally, the inability to breathe is quite literal. This metaphoric suffocation is indicative of a broader policy change that expands the so-called war on terror into a noose around Black America's neck.

Understanding this expansion requires understanding the American military and its connection with policing. Few Americans realise they are citizens of an empire, one with hundreds of military bases in more than a third of the world's sovereign nations. The criminalisation of Black and brown Muslim people abroad as terrorists influences the treatment of their American counterparts at home. American police end up with military-grade weapons. The same tools of indiscriminate carnage used in Mogadishu and Baghdad wound up in the hands of the "PoPo". However, excess military supplies are not the only things police inherit from the military. America's conquests serve as training exercises for the "boys in blue".

Policing practices have been continuously informed by counterinsurgency warfare, which is just a euphemism for "crimes against humanity". How Eyad Hallaq, a disabled Palestinian, was murdered and dehumanised by an outgrowth of American foreign policy, sets the tone for sanctioning Black and brown bodies for violence in places like Minnesota. The imperial tactics of torture and suppression that stole the lives of countless Muslims took George Floyd's life, too, on the streets of Minneapolis.

The "war on terror" creeps onto Black America through the institution of policing. Police do domestically what the American military does internationally: extracting resources while suppressing the locals. The US was built on a principle of racial exclusivity yet was dependent on non-white labour. The establishment of policing governs this central contradiction.

The police were put in charge of suppressing communities of colour while society exploited them. This dynamic continued beyond the police's origins as slave patrols and lynch mobs. In the words of the deputy director of the immigrant defence project, Mizue Aizeki, "The real function of policing is ... really to maintain social control and an unequal status quo." Essentially, police are the vanguard of systemic inequality.

It is well known that police behave differently in the barrio than they do in the suburbs. The police enter impoverished and minority areas like a foreign occupation, treating the inhabitants with contempt. Huey P Newton once noted the disparate practices: "In America, Black people are treated very much as Vietnamese people or any other colonized people ..."

Newton became cognisant of the parallel experiences between Black and brown folks within the US and the Black and brown people outside the US who are under Uncle Sam's imperial boot. The fear of Islamic "terrorism" has further given the police an excuse to militarise. Institutional Islamophobia sees Muslims as potential subversives in a civilisational war with savagery. 9/11 gave police another reason to go to war with the American people, especially those who lay at the intersection of Islam and Blackness.

Islamophobia and anti-Blackness converge into the crosshairs fixated on the Somali American community, mostly concentrated in Minneapolis. COINTELPRO, a federal government programme that upheld white supremacy through murdering Black activists, gave birth to our modern CVE and TVTP programmes. The malformed TVTP essentially is a thought-policing programme designed to criminalise American Muslims who do not pursue Andy Griffith-style assimilation or McCarthyite allegiance to fascism. These programmes fixate on crushing dissent and coercing conformity from the Somali community. The toxic energy and funding that went into TVTP helped fuel the atmosphere and the militarised police apparatus that lynched George Floyd.

Popular political discourse paints ugly pictures of Black protesters with the same brushes it uses to demonise developing countries' rebellion. Even the lexicon of counterterrorism has been imported from Gaza and Kabul to criminalise the new Black Intifada. Respectability politics made sure to prioritise the value of readily replaceable property over the lives of Black folks.

Designating protesters and looters as "terrorists" obscures the moral realities of anti-racist resistance. It also links Black Power to "monsterised" depictions of Muslims abroad. Black people and Indigenous Americans are two-and-a-half and three times more likely to die in police custody, respectively. That is not surprising when we understand the police as an extension of a military that continues settler colonialism beyond its borders.

With the growing demand to defund or abolish police that followed Floyd's murder, it would seem that the recent protests have been successful in catapulting a new discourse into the popular conversation on police. Riots, once described by Martin Luther King Jr as "the language of the unheard", have proven to be more audible than lawful dissent.

However, Newton's third law of motion dictates, for every widespread political shift, we can expect a fascist push back. Donald Trump took advantage of the situation by exaggerating the threat of rioting to assume unprecedented power. In a sith-like political manoeuvre, Trump threatened to invoke a 203-year-old law that would effectively grant him the authority to wage war against Black America and its allies. Like a narcissistic tyrant, he manipulates the fear of Black protest to exalt himself further on a pedestal of militarised police brutality.

It is no coincidence that the highest-level authority in our military-executive branch is asking permission to treat Black protesters like a foreign military invasion. Although Trump ultimately failed and the political protests have slowly receded, the attempt to wage war on Black America is telling. With Trump's abuse of the Insurrection Act, the expansion of the "war on terror" to Black America will be official.

The police and the American military empire are two heads on the same Cerberus. They defend the underworld of systemic injustice, domestically, and abroad. By expanding the focus of the "war on terror" apparatus to include Black people, racist forces have unwittingly pushed Black and Muslim liberation movements even closer together than they already are.

The trauma of surveillance, racial criminalisation and murder of innocent people is blurring the lines between Blackness and the Muslim international. This world failed George Floyd, Eric Garner, Eyad Hallaq and so many more who suffocated under its oppressive weight. If our adversaries unified, then Black Power and the Muslim international need closer alliances than ever if we are to collectively breathe again.

Shaheen Nassar is an activist and a University of California Riverside graduate with a degree in Ethnic Studies.

Original Headline: The 'war on terror' is a noose around Black America's neck