Don't Let the West Bring Out Our Worst 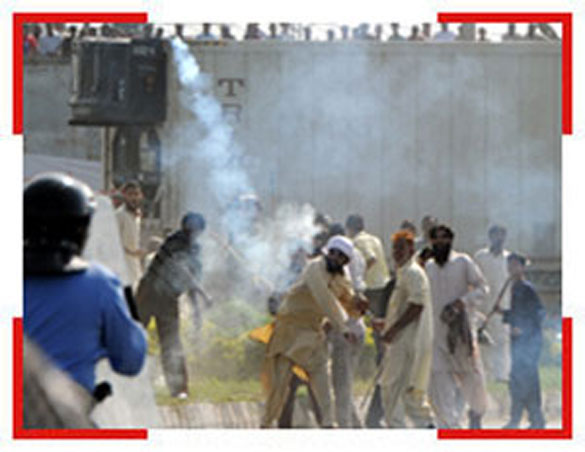 SELF-HARM: Muslims may continue to suffer grievous losses at their own hands unless they embrace change

The twin strategies of our adversaries — of both provoking and punishing Muslims — is the most effective way to cause incalculable and irreparable damage to Muslims the world over. Antagonists both in the West and within the Islamic world know very well that the slightest provocation aimed at Muslims is enough to make them inflict colossal harm upon their own as well as others' property, economy and even lives. Yet any damage to the properties of minorities or foreigners in Pakistan is a violation not only of Islamic edicts, but also of the laws of our land. Such acts tarnish the image of our religion as well as our country.

It is high time for the Muslim world generally, and Pakistan in particular, to make sure that such provocation does not result in self-destruction. It is difficult to find any consensus about how Muslims should condemn sacrilegious acts committed by those mischief-makers in the West who publish highly insulting, provocative and intolerable cartoons and sketches of the Prophet Muhammad (PBUH), or make films ridiculing Islam and our Prophet Muhammad (PBUH), with the sole objectives of, on the one hand, insulting and defaming Islam and our Prophet (PBUH) and, on the other, inciting and provoking Muslims to stage violent protests, rallies and jalsas that lead to the destruction of their own properties and economy.

These nefarious intentions must be recognised and highlighted by the more rational scholars and leaders of public opinion in Muslim countries, who should encourage people to refrain from falling prey to such provocation, and to protest in a manner that hurts their antagonists rather than their fellow citizens or their country.

The Muslim world was warned about this by Dr Mahathir Mohamad, the then Prime Minister of Malaysia, when he addressed the 27th Conference of Foreign Ministers of the OIC (Organisation of Islamic Cooperation) countries in Kuala Lumpur in June 2000. He identified our adversaries' strategy when he said, 'Believe me, our detractors and enemies are not concerned how good or bad Muslims we are. To them, we are all Muslims, their enemies and potential terrorists and they will do their very best to weaken us and, in many instances, destroy us. They will directly or indirectly support the violent extremists among us and the orthodox who reject the knowledge and skills with which to defend ourselves.'

Dr Mahathir's speech explains the apparent paradox in Western policy towards the Muslim world. The West creates unjust situations and, when these injustices trigger a militant backlash from oppressed Muslims, the West promptly brands them fundamentalists and begins a ruthless crackdown against them. That, naturally, adds further fuel to the fire.

I fear that Muslims may continue to suffer irreparable losses at their own hands as well as those of the West unless they realise the need for change in their own policies, responses and reactions, in the light of a changing world that has undergone industrialisation and the huge rise of information technology. We can and must repulse and defeat challenges by our adversaries that provoke and ultimately punish or even destroy Muslims.

First of all, we have to come to terms with the basics of modern times. Unfortunately, even in this third millennium, an intolerant and militant orthodoxy has trapped the Muslim intellect in a 'mediaeval mindset', and stifled its spirit of inquiry, progress, economic and human development. Extremist militant forces such as the Taliban and their supporters must realize that large numbers of civilian Muslims and members of Pakistan's armed forces have been brutally killed by them in Pakistan, in the name of Islam. These extremist orthodox and jihadi forces condemn knowledge, science and technology as secular and reject them in favour of their own bigoted Islamic school of thought. Most regrettably, we in Pakistan follow the dictates of the narrow-minded, semi-literate Mullas who keep coming up with Fatwas against all other sects of Muslims and every scientific invention, so much so that in their opinion, even photography, television, music and education for women are not permissible in Islam.

This has resulted in a rapid decline in progress and economic development in many Muslim countries, and has also caused a continuing brain drain to the West. The exodus of technocrats, skilled and semi-skilled labour, particularly from Pakistan, should be a matter of grave concern for us. Instead of shunning modern science, technology, economics and knowledge, we must embrace them to bring Pakistan on a par with the modern world in all fields. To achieve this much needed objective, the eradication of terrorism and bigotry from Pakistan is a precondition.

Contrary to what hostile anti-Muslim propaganda claims, the irrefutable truth is that Islam is more secular in essence than other faiths, as Islam is the only religion that recognizes and respects all the messengers of God and the divine holy books they brought. In Islam we recognize Allah as 'Rabbul Alamin' ('Lord of the Worlds') and do not confine him to simply being 'Rabbul Muslimin'. I sincerely believe that secularism is not un-Islamic. The dictionary meaning of secular is 'not monastic, not theocratic or not cleric'.

To translate secular as 'La-deeni' is a dishonest distortion of the real meaning and import of this word. There is no room for a church or pope or emperor in the religious and political system of Islam. An Islamic state and a secular state are both obliged to give equal rights, status, opportunities and freedom to all religions. Secularism only implies that the state should have nothing to do with a citizen's faith, which s/he is allowed to profess and practise freely, as was also guaranteed by the founder of Pakistan, Mohammad Ali Jinnah. In this sense Islam promotes a secular society. Islam strictly prohibits the use of force, coercion or compulsion.

Yet instead of following, preaching and promoting this spirit of Islam, many of the orthodox, narrow-minded groups of Muslims lend support to the propaganda that Muslims are violent, intolerant terrorists and jihadis, and so Islam, by implication, is seen as the root cause of violence, terrorism and backwardness. Militant Jihadi groups like the Taliban and their supporters ignore the fact that by their aggressive sermons, militancy and terrorist acts, they are serving the most vital interest of the enemies of Islam, against whom they profess to have launched their 'jihad'. The Taliban and their supporters in various religious parties have inflicted so much damage on the life and property of Pakistan’s citizens, and have also done untold harm to the image of Islam throughout the world. We in Pakistan seriously fear the Talibanisation of our country, unless this process is effectively arrested and eradicated without further delay.

On the one hand we must, through concerted efforts, eradicate terrorism in all its forms and remove the stigma of militancy from the face of Muslims the world over. Yet at the same time, we also have to persuade the West to abandon its policy of 'provoking and punishing' Muslims. If the West is sincerely against militancy and terrorism and genuinely wants peace, then it must also honour and accept the basic human values, equal treatment and equal rights and status of Muslims, instead of following the principle that 'might is right'. The world should not forget that violence breeds violence.