Beyond Guantánamo, A Web of Prisons

It is the other Guantánamo, an archipelago of federal prisons that stretches across the country, hidden away on back roads. Today, it houses far more men convicted in terrorism cases than the shrunken population of the prison in Cuba that has generated so much debate. 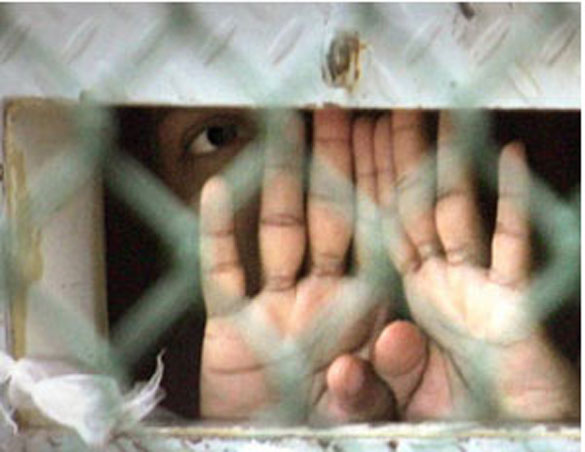 AP A file picture of a detainee at Guantánamo Bay.

An aggressive prosecution strategy, aimed at prevention as much as punishment, has sent away scores of people. They serve long sentences, often in restrictive, Muslim-majority units, under intensive monitoring by prison officers. Their world is spare.

SOME OF THE PRISONERS

Among them is Ismail Royer, serving 20 years for helping friends go to an extremist training camp in Pakistan. In a letter from the highest-security prison in the United States, Mr. Royer describes his remarkable neighbours at twice-a-week outdoor exercise sessions, each prisoner alone in his own wire cage under the Colorado sky. “That's really the only interaction I have with other inmates,” he wrote from the federal Supermax, 100 miles south of Denver.

There is Richard Reid, the shoe bomber, Mr. Royer wrote. Terry Nichols, who conspired to blow up the Oklahoma City federal building. Ahmed Ressam, the would-be “millennium bomber,” who plotted to attack Los Angeles International Airport. And Eric Rudolph, who bombed abortion clinics and the 1996 Summer Olympics in Atlanta.

In recent weeks, Congress has reignited an old debate, with some arguing that only military justice is appropriate for terrorist suspects. But military tribunals have proved excruciatingly slow and imprisonment at Guantánamo hugely costly — $800,000 per inmate a year, compared with $25,000 in federal prison.

The criminal justice system, meanwhile, has absorbed the surge of terrorism cases since 2001 without calamity, and without the international criticism that Guantánamo has attracted for holding prisoners without trial.

By contrast with the record at Guantánamo, where the Defence Department says that about 25 per cent of those released are known or suspected of subsequently joining militant groups, it appears extraordinarily rare for the federal prison inmates with past terrorist ties to plot violence after their release. Both the Obama administration and Republicans in Congress often cite the threat of home grown terrorism. But the Bureau of Prisons has proven remarkably resistant to outside scrutiny of the inmates it houses, who might offer a unique window on the problem.

In 2009, a group of scholars proposed interviewing people imprisoned in terrorism cases about how they took that path. “There's a huge national debate about how dangerous these people are,” said Gary LaFree, director of a national terrorism study centre at the University of Maryland, who was lead author of the proposal. “I just think, as a citizen, somebody ought to be studying this.”

The Bureau of Prisons would not make any officials available for an interview with The New York Times, and wardens at three prisons refused to permit a reporter to visit inmates. But e-mails and letters from inmates give a rare, if narrow, look at their hidden world.

Consider the case of Randall Todd Royer, 38, a Missouri-born Muslim convert who goes by Ismail. Before 9/11, he was a young Islamic activist with the Council on American-Islamic Relations and the Muslim American Society, meeting with members of Congress and visiting the Clinton White House.

Today he is nearly eight years into a 20-year prison sentence. He pleaded guilty in 2004 to helping several American friends go to a training camp for Lashkar-e-Taiba, an extremist group fighting Indian rule in Kashmir. The organisation was later designated a terrorist group by the United States — and is blamed for the Mumbai massacre in 2008 — but prosecutors maintained in 2004 that the friends intended to go on to Afghanistan and fight American troops alongside the Taliban.

Mr. Royer had fought briefly with the Bosnian Muslims against their Serbian neighbours in the mid-1990s, when NATO, too, backed the Bosnians. He trained at a Lashkar-e-Taiba camp himself. And in 2001, he was stopped by Virginia police with an AK-47 and ammunition in his car.

But he adamantly denies that he would ever scheme to kill Americans, and there is no evidence that he did so. In grand jury testimony, he expressed regret about not objecting during a meeting, just after the September 11 attacks, in which his friends discussed joining the Taliban.

Whatever the facts, he is paying the price.

His 20-year sentence was the statutory minimum under a 2004 plea deal he reluctantly took, fearing that a trial might end in a life term.

He is barred from using e-mail and permitted only three 15-minute phone calls a month — recently increased from two, a move that Mr. Royer hopes may portend his being moved to a prison closer to his children. His letters are reflective, sometimes self-critical, frequently dropping allusions to his omnivorous reading. His flirtation with violent Islam and his incarceration, he says, have not poisoned him against his own country.

Federal officials say the government's zero-tolerance approach to any conduct touching on terrorism is an important reason there has been no repeat of September 11. Lengthy sentences for marginal offenders have been criticised by some rights advocates as deeply unfair — but they have sent an unmistakable message to young men drawn to the rhetoric of violent jihad.

The strategy has also sent scores of Muslim men to federal prisons.

After news reports in 2006 that three men imprisoned in the 1993 World Trade Center bombing had sent letters to a Spanish terrorist cell, the Bureau of Prisons created two special wards, called Communication Management Units, or C.M.U.'s. The units, which opened at federal prisons in Terre Haute, Ind., in 2006 and Marion, Ill., in 2008, have set off litigation and controversy, chiefly because critics say they impose especially restrictive rules on Muslim inmates, who are in the majority.

“The C.M.U.'s? You mean the Muslim Management Units?” said Ibrahim Hooper, a spokesman for the Council on American-Islamic Relations.

The units currently hold about 80 inmates. The rules for visitors — who are allowed no physical contact with inmates — and the strict monitoring of mail, e-mail and phone calls are intended both to prevent inmates from radicalising others and to rule out plotting from behind bars.

A Bureau of Prisons spokeswoman, Traci L. Billingsley, said in an e-mail that the units were not created for any religious group but were “necessary to ensure the safety, security and orderly operation of correctional facilities, and protection of the public.”

An unintended consequence of creating the C.M.U.'s is a continuing conflict between Muslim inmates and guards, mainly over the inmates' demand for collective prayer beyond the authorised hour-long group prayer on Fridays. The clash is described in hundreds of pages of court filings in a lawsuit. In one affidavit, a prison official in Terre Haute describes “signs of radicalization” in the unit, saying one inmate's language showed “defiance to authority, and a sense of being incarcerated because of Islam.”

There is some evidence that the Bureau of Prisons has assigned Muslims with no clear terrorist connection to the C.M.U.'s.

A former inmate at the Marion C.M.U., Andy Stepanian, an animal rights activist, said a guard once told him he was “a balancer” — a non-Muslim placed in the unit to rebut claims of religious bias. Mr. Stepanian said the creation of the predominantly Muslim units could backfire, adding to the feeling that Islam is under attack.

It may be too early to judge recidivism for those imprisoned in terrorism cases after September 11; those who are already out are mostly defendants whose crimes were less serious or who cooperated with the authorities. Justice Department officials and outside experts could identify only a handful of cases in which released inmates had been rearrested, a rate of relapse far below that for most federal inmates or for Guantánamo releases.

As for Mr. Royer, he is approaching only the midpoint of his 20-year sentence. Did he get what he deserved? Chris Heffelfinger, a terrorism analyst and author of “Radical Islam in America,” did a detailed study of the Virginia jihad case, and concluded that Mr. Royer's sentence was perhaps double what his crime merited. But he said the prosecution was warranted and probably prevented at least some of the men Mr. Royer assisted from joining the Taliban.

“I think a strong law enforcement response to cases like this is appropriate nine times out of 10,” Mr. Heffelfinger said. Mr. Royer himself, in his long presentencing letter to Judge Leonie M. Brinkema, said he understood why he had been arrested. “I realise that the government has a legitimate interest in protecting the public from terrorism,” he wrote.