When Qasim Rashid, a practicing Muslim, finished his internship at a labour law firm in Virginia 10 years ago, he was told he would be offered a full-time attorney role on one condition: if he toned down his outspokenness on Islamophobia. 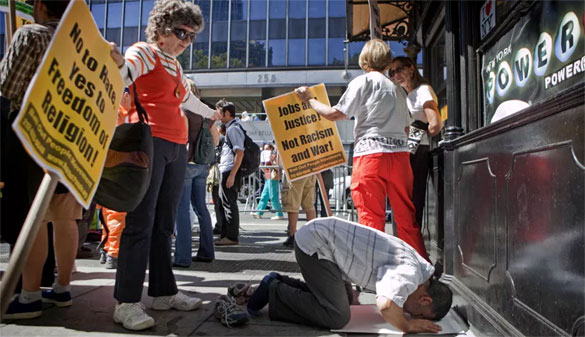 Bette Cassaro, left, of Woodside, N.Y., protects Mohammad Abdul Awal, right, of Queens, N.Y., from the passing foot traffic as he prays during a rally in support of a proposed Islamic centre and mosque near Ground Zero in New York on Sept. 11, 2010. David Goldman, Associated Press

Rashid, who is now the Democratic nominee for Virginia’s 1st Congressional District, said the incident happened in 2010 amid the Ground Zero mosque controversy, the “Burn a Quran Day” initiative, and the Times Square bombing attempt.

“I was outspoken about my faith to say, ‘Hey we are human beings, too,’ and apparently that made some people uncomfortable,” said Rashid, who had taken to social media to voice his concerns about rising anti-Islamic sentiments in the country. 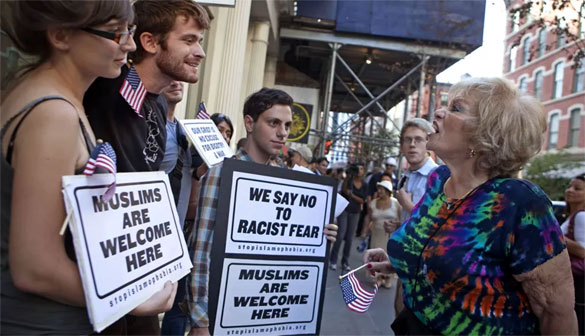 Linda Jacknow, 70, of Long Island, N.Y., right, an opponent of the proposed Islamic centre and mosque to be built near Ground Zero argues against Aviva Stampfer, 21, of Manhattan, N.Y., left, and Blake Luley, 23, of Brooklyn, N.Y., both in favor of the plan, as their respective rallies converge in New York on Saturday, Sept. 11, 2010. David Goldman, Associated Press

Rashid’s experience speaks to the institutional discrimination that many American Muslims face in the U.S., according to a new report. Data from the Institute for Social Policy and Understanding indicates Muslims are more likely than any other faith groups to experience religious discrimination in both institutional and interpersonal settings.

The survey noted that Muslims face higher levels of institutionalized discrimination compared to their Jewish counterparts and those belonging with other faith groups in the general population. At the airport, roughly half of Muslims (44%) say they face discrimination, a significantly higher number than Jews (2%) and other faith groups (5%) experienced.

“Discrimination is not always someone wearing a KKK hoodie screaming slurs at you, it can be much more subtle and sinister,” said Rashid.

The institute’s findings are part of its fifth annual poll of U.S. religious communities, which surveyed 2,157 Americans who self-identified as either Muslim, Jewish, Catholic, Protestant, white evangelical or unaffiliated. According to the institute’s Director of Research Dalia Mogahed, one goal of the research is to provide insights to the Muslim community and policymakers so they can identify issues and effectively allocate resources toward combating anti-Muslim sentiment discrimination.

Institutional discrimination can have two causes, said Mogahed. The discrimination can stem from inherently racist policies or from people executing neutral policies in a racially biased way. “In some cases, implicit biases can manifest as institutional Islamophobia while in other cases, structural forces target certain groups.”

In the aftermath of 9/11, those “structural forces” showed up in the form of expansive federal policies such as the Patriot Act, the New York Police Department’s Muslim Surveillance Program and the federal National Security Entry-Exit Registration System.

The “special registration” system, as it was called, required all males 16 or older from 25 countries to register every time they entered and exited the U.S. The process included fingerprinting, photos, providing private financial information and interrogating people about the purpose of entry and nature of their travel outside the country. While the “special registration” did not explicitly target any particular religious group, it disproportionately affected Arabs and Muslims, according to research on the impact of the program that was discontinued under the Obama administration.

Dr. Adil Solaiman, an assistant professor of pediatrics at Thomas Jefferson University, dubs the National Security Entry-Exit Registration System “the original Muslim ban.” When the Bush-era program was introduced, Solaiman was a 16-year-old boarding school student at Cate School, located just outside of Santa Barbara, California. A Pakistani citizen whose family lived in Saudi Arabia at the time, Solaiman would fly between the Middle East and the U.S. about three times a year and remembers being subjected to lengthy interrogations almost every time, with one particular round of questioning lasting more than 4 hours.

Solaiman, who is now a U.S. citizen, said the experience still informs how he travels.

“I’ll always put on a nice shirt and carry my hospital badge when I fly so I appear more professional when I reach the immigration desk,” said Solaiman. “I know I am looked at differently, so it feels like I have to prove that I belong in some way.”

Research shows that when people are “chronically treated differently, unfairly or badly,” it can lead to a variety of negative health outcomes including low self-esteem and higher risk of developing stress-related conditions such as anxiety and depression.

Hate groups and persistent anti-Muslim discourse have been “hyper successful” at framing Muslims as “inherently foreign” and this idea seeps into discriminatory policymaking, law enforcement, attitudes toward Muslims and virtually everything, said Scott Simpson, public advocacy director at Muslim Advocates.

Muslim Advocates is a national civil rights organization working to fight anti-Muslim bigotry with the goal of “attaching consequences” to religious discrimination at every level. Whether it’s asking Joy Reid to apologize for casual Islamophobic rhetoric; naming and shaming Hyatt Hotels for hosting an anti-Muslim conference; filing a complaint with the Equal Employment Opportunity Commission when Amazon refused to give its employees prayer breaks; or sending a demand letter to Immigration and Customs Enforcement for serving pork to Muslim detainees in violation of their religious beliefs — the organization’s goal is to “halt bigotry in its tracks.”

Simpson said anti-Muslim sentiment is common in both political parties with some of the most blatant discrimination coming from individuals and institutions that claim to be progressive and liberal. On the other hand, there are some conservatives that have “really gotten it” because they understand that religion is sacred, even if it’s not their own.

“The reality is that there is a small percentage of the population that is ‘really’’ overtly anti-Muslim and then there is everyone else, who would rather not deal with it,” he said. “We need everyone to speak up.”

Original Headline: Why Muslims experience more discrimination than other faith groups in America