French President Emmanuel Macron has given an assurance that Muslims who die in France during the coronavirus pandemic will be buried in accordance with their religious beliefs and traditions. 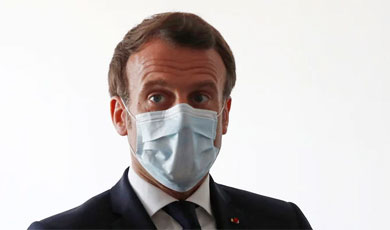 Mohamed Moussaoui, president of the French Council of Muslim Faith (CFCM), had written to the president about potential issues with Muslim burials as a result of lack of space in municipal cemeteries and the fact it is not currently possible for the deceased to be returned to their homelands for burial. Macron called him to discuss the concerns.

“The president made a commitment, along with Interior Minister Christophe Castaner, to respect religious traditions when burying deceased Muslims, even if it means making arrangements with neighbouring areas when there are not enough burial sites,” Moussaoui said.

He also asked Macron about rumours that mandatory cremations might be carried out with no family members present if, for example, there were too many bodies for burial.

“The president assured me that this had been completely ruled out and that France would take all necessary measures to ensure that religious traditions pertaining to burials are respected,” he said. “I stated clearly that cremation is prohibited in our religion and Macron gave me his word that it would not happen.”

Moussaoui and Macron also discussed ways in which Muslims can remain in contact with their religious leaders during this time of social distancing and self-isolation.

“(The president) mentioned a proposal made by the scientific council which suggested creating a telephone platform for citizens seeking comfort, or psychological and spiritual assistance, which they can get through imams and chaplains,” said Moussaoui. “We at CFCM had already made the decision to create an assistance platform, so we were part of this collective approach.

France has a population of over 62 million, about 5.5 million of whom are Muslims. As of Monday, almost 9,000 people had died of coronavirus-related conditions, though it is unclear how many Muslims are among the dead.

“We do not know the exact number since we do not have a system that counts deaths in France based on religious affiliation,” said Moussaoui. “Local people of course know, but there is no official way to count deaths according to religion.”

Certain funeral procedures have been put on hold during the COVID-19 outbreak. In particular, the CFCM notified Muslims that the bathing and dressing of corpses is suspended in accordance with a decision by the High Council of Public Health and the Muslim authorities. The practice is commonly suspended during pandemics to protect those who come in contact with corpses that might still harbor infections.

In addition, the number of people who can attend burial services is limited to 20, regardless of religion. The number might be lower, depending on local circumstances.

“Muslims have separate burial areas in public cemeteries … with religious ceremonies performed by imams for Muslim dead,” said Moussaoui. “The imams pray over all Muslim graves so we asked years ago for a separate burial area. We wanted to allow the graves to be oriented toward Makkah.”

“This number is still very low,” said Moussaoui. “We feel it more this year because there have been more deaths and fewer deportations. Some Muslim officials tell us that there are communes that do not have separate burial sites for Muslims, and that forces us to ask for exemptions from neighbouring communes. I also brought to President Macron’s attention during our call the need for creating new, separate Muslim burial areas.”

All 2,800 mosques and prayer rooms in France have been closed since March 15, and all prayers, including Friday prayers, must be said at home. With Ramadan approaching, Moussaoui said guidelines have been issued for preparing for a holy month like no other. It explains that it is likely all mosques will remain closed to slow the spread of the virus.

“During Ramadan, Taraweeh (night prayers) will be suspended and all prayers will be performed at home,” said Moussaoui. “We called on imams to use all means of communication at their disposal to connect with people, so some imams have recorded sermons and prayers and uploaded them online.”

The CFCM will meet on April 23 to determine the start of Ramadan, which is likely to be April 24.

“At the end, we will meet for the feast of Eid Al-Fitr, which might be on May 23,” added Moussaoui. “We have asked various groups to provide fast-breaking meals for the poor through the relevant charities. We have also asked the imams to contact them so that the spirit of sharing will prevail despite the quarantine.”