This week marks 20 years since the outbreak of the Second Intifada. The years that followed witnessed bus and café bombings perpetrated by organizations wrapped in the banners of insurgent political Islam, most importantly Hamas and Palestinian Islamic Jihad (PIJ). Their tactics—including suicide bombings and the deliberate targeting of civilians—were borrowed from an earlier generation of Islamists, the Shiite Jihadis of the Lebanese group Hezbollah. 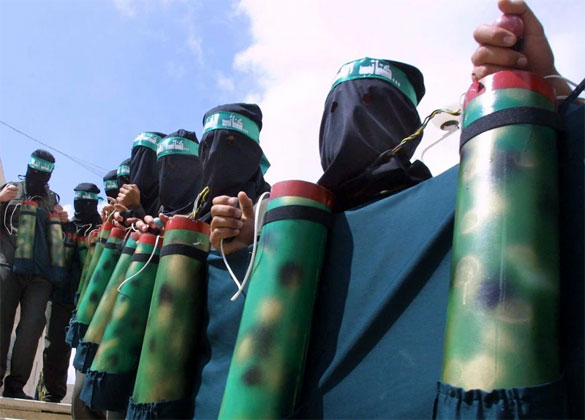 Masked Palestinian militants carry what is supposed to be explosives for suicide bombers during a demonstrations marking the anniversary of the second intifada, in the northern West Bank town of Nablus on Sept. 28, 2003.

The history of the past 20 years marks the rise of the revolutionary political idea of insurgent political Islam—but also its sudden decline. For a distinct period, bottom-up Islamism was the most vital political ideology in the Middle East, capturing the energy that was once invested in pan-Arab nationalism in an earlier era. Islamism’s ongoing eclipse is no less stark than the similar decline of its predecessor ideology.

The Second Intifada was the first eruption of political Islam in its insurgent form against a Western democracy (Sunni Islamism had already risen against and been defeated by the Syrian and Algerian regimes in the 1980s and ‘90s, respectively.) It felt unfamiliar at first, but would quickly become a harbinger. One year later, as Israel was still in the middle of its assault of suicide bombings, al Qaeda destroyed the twin towers in New York. That attack—together with subsequent ones in Madrid, London, and Paris—ushered in a global focus on the issue of insurgent political Islam.

From 2010 to 2014, Islamist popular mobilization and insurgency arrived in mass form in the heartland of the Arab Islamic world itself. This was evident in the rapid takeover of the Syrian rebellion by Sunni Islamist militias, in the Muslim Brotherhood’s brief triumph in Egypt, and reaching its purest, most unalloyed expression in the shape of the Islamic State’s self-declared caliphate. This marked the high point of the Arab world’s insurgent Islamism—and also the start of its downfall. The Muslim Brotherhood’s long-awaited period of rule proved a brief interlude. Syrian President Bashar al-Assad’s powerful allies, Iran and Russia, held back the Islamist-dominated revolt in Syria. The Islamic State provoked a massive reaction against itself and initiated the decline of its underlying ideology.

Look around the Arabic-speaking world today. Where does one find an insurgency led from below—a jihad, a popular revolt—of the kind premiered by Hamas and PIJ during the Second Intifada and then witnessed on a vastly larger scale by the Syrian Sunni Arab rebellion and the Islamic State in Syria and Iraq, the Islamist-dominated insurgency against former Libyan leader Muammar al-Qaddafi, and the mass civil revolts in Egypt and Tunisia? Nowhere.

There is certainly disorder. The end result of the past 10 years of political chaos triggered by Islamist insurgencies is that large swaths of the Arabic-speaking world are smoking ruins. Today, across that ruin, with its semi- or non-functioning governments in Libya, Yemen, and across the single space still officially referred to as Iraq, Syria, and Lebanon, what one finds is not popular insurgency, but rather the machinations of states and their obedient clients.

The main legacy of Islamist insurgency’s tearing asunder of the Arab world, paradoxically, is the terminal weakening of a number of Arab states, and their penetration by a variety of regional and global non-Arab powers. These powers—Iran, Turkey, Russia, and the United States—make use of the remnant organizations of the insurgents as contractors and cannon fodder for their own designs.

Political Islam, meanwhile, has itself entered a new phase. No longer an insurgent banner, it is now a decoration used by powerful states as part of their justification of themselves. Today, it is borne along by Turkey and Iran, and this is its main remaining relevance.

But in both these cases, political Islam is mixed up with a kind of imperial revanchism as the main justifying idea of the regimes. This is largely a top-down affair, with insurgents remustered as military contractors. The former Sunni Islamist rebels of northern Syria, for example, are now trucked and flown to Libya and Azerbaijan by the Turkish state and Adnan Tanriverdi’s SADAT Company. The various militias that Iran’s Islamic Revolutionary Guard Corps raises—such as the Fatemiyoun Brigade and the Zeinabiyoun Brigade—labor in return for tiny salaries and residency rights to the Shiite refugees who make up the ranks.

If this reminds you of anything, it should. It is a phase that both Arab nationalism and Soviet-style communism also passed through before they finally dissolved. Long after its existence as a revolutionary idea, Arab nationalism became the empty excuse offered by a series of Arab police states for their existence and their repression. And long after the days when it inspired millions, Soviet-style communism remained as the justifying ideology of a number of harsh and airless dictatorships in Europe, Asia, and Africa.

Can Anyone Prevent a Third Intifada?

A wave of violence is spreading across Israel — and a leadership vacuum on both sides is allowing it to spiral out of control.

Political Islam has now entered this phase of its existence. Which means that as an idea, it hardly matters anymore. The states have returned. The Middle East is entering a phase of great-power competition. The recent deal between Israel and the United Arab Emirates was an important event in this process of alliance crystallization.

Three power blocs are now set to compete in the Persian Gulf, the Mediterranean, and across the semi-governed spaces of the Arabic-speaking world. Two of these—those led by Iran and Turkey—present political Islam in its post-insurgent phase. The third that of Israel, Saudi Arabia, Egypt, and the UAE, constitutes the camp of the reaction against insurgent political Islam, which defeated it.

So we are, it appears, at the end or in the closing stages of a trajectory. The trajectory is that of an idea, which came, rose, and was conquered, and the legacy of which is a broken region and two decades of insurgency and civil war. We didn’t know what was coming then, in the summer of 2000, in Jerusalem, in the curious interim months between the end of the bright hopes of the 1990s and the thing that was going to replace them. We know now.

As to what will follow, there will be winners and losers. Iran and Turkey will continue to present themselves as representatives of Islamic authenticity and purity. There will be few buyers. One of the characteristics of ideologies in their senile phase, when they become part of the language that regimes use to justify themselves, is that no one is really convinced by them. Not even the people who serve them, and certainly no one else. The game to come is great-power competition, directed by ruling elites from above. Among the emergent generation, meanwhile, there appears to be a very great cynicism, a perhaps healthy indifference toward all such narratives, and a search mainly for self-advancement.

Israel, like the other areas targeted for destruction by insurgent political Islam over the past 20 years, has come through this period. Meanwhile, the idea that first erupted into real consequence for the Arab world in Jerusalem, and which for a moment seemed about to bestride the world, has gone down to defeat. In 2020, 20 years since the outbreak of the Second Intifada, the age of Islamist insurgency in the Middle East has passed.

Original Headline: The End of the Age of Insurgency