Arguments over Muslim women wearing headscarves surface fairly regularly in France. As the Muslim community again hit the headlines we speak to the French women who wear the Hijab about how it feels to have your clothing made the object of national scrutiny.

It’s a recurrent topic in France. In October, it was a mother wearing a headscarf on a school trip. Last spring, it was a popular sports store’s launch of the ‘running Hijab’. In 2016, it was the ‘Burkini’ (a total-body swimsuit).

Each time, the outrage over a piece of clothing worn by some Muslim women spiralled into a near existentialist debate in France: Did these women’s dress code breach with the principle of secularism at the heart of the French state?

“Every time, it’s our belonging or exclusion to society that is really being discussed,” said Hania Chalal, a 26-year-old student in Strasbourg, who leads the union Muslim Students in France (Etudiants Musulmans de France, EMF).

Hania is French. She grew up in Strasbourg, and felt “no pressure” from her parents to wear the headscarf.

“I wore it quite late, compared to other girls,” she said.

Hania was 22 when she first made the headscarf a permanent part of her outfit. In the years that followed, her life would change in many ways.

On Tuesday French President Emmanuel Macron laid out the first of four pillars in a new plan to counter what the government has chosen to call “Islamist separatism.”

Cautioning against “stigmatising” Islam as a religion, Macron said he would target the Islamism that divides, the one that leads to communitarianism - having people stay in separate spheres.

Macron spoke from Bourtzwiller, an area of the city Mulhouse that has been identified by the government as needing to be “re-conquered” by the Republic (the official term is “QRR”).

Bourtzwiller, which has been on the government’s radar partly because of its partly Qatari-funded mosque, was well-suited as a location to launch the first pillar of the plan: fighting foreign influence.

The French government will work to reduce the number of foreign imams funded by other countries in France (there are currently roughly 300 foreign imams in France, most are from Turkey and Algeria, about 30 are from Morocco). Primary school children being taught in languages other than French would be subject to closer scrutiny.

“Islamist separatism is incompatible with freedom and equality, with the indivisibility of the Republic and the unity of the nation,” the President said.

Paradoxically, Hania’s story is an example of “separatism," but a different kind than the one the President was targeting in Mulhouse.

After she decided to permanently wear the headscarf, Hania found herself increasingly sidelined in French society. Not because she wanted to be, but because her headscarf was not wanted there.

For years, Hania was an avid swimmer. When she went to renew her lifeguard certificate, wearing the headscarf, the administrator told her that “the French classes are upstairs.”

“He was quite shocked when he realised that I was supposed to be there,” Hania said. Her headscarf did not, to the administrator, seem compatible with being a trained lifeguard.

In a way he was right.

“I can cover my hair, that’s not a problem. But I can’t wear a swimsuit that is allowed here,” she said.

Burkinis are not allowed in public swimming pools in France. Hania also knew how some people looked at the religious women who tried to wear alternative, more covered-up swimming costumes.

"Some complain that it was not hygienic, others would claim it was not allowed," she said.

In the choice between her favourite hobby and her religion, she chose the latter.

“It’s difficult when you have to stop doing something you love because people don’t want you there,” she said.

“Swimming is the one thing I really miss in my life.”

Soon, Hania will have to choose between her headscarf and her career. She is studying to become a teacher, but all overt religious symbols have been banned from state schools since 2004. 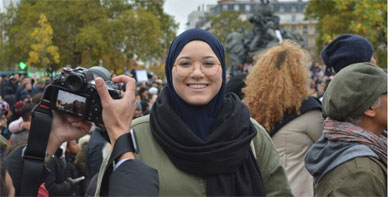 Hania took part in the march against Islamophobia in Paris in November. Photo: Private.

“An increasing number of Muslim women are being isolated from French society,” said Nacira Guénif, a French sociologist and anthropologist specialised in questions related to laïcité (the French term for state secularism).

Guénif, who teaches at the University Paris 8, has written several books about Muslims in France, one of them is called “The Republic undressed by its immigration” (2006).

A Muslim woman who wears the headscarf is visibly religious. She is within her right to do so, bar those public spaces that are subject to state restrictions. Still, some see her very appearance as defying - even rebelling against - the very principle of laïcité.

“By wearing the headscarf, these women refuse to let themselves be dictated to by the French Republic. As a result, they are rendered eternally suspicious,” Guénif said.

The 1905 law separating church and state was adopted to guarantee freedom of and from religion at the same time.

Its basic principle is quite simple: all religions are allowed, none is favoured. But over the years it has proved increasingly difficult to determine what that means in practice.

More and more, laïcité has been turned into a rallying cry against what some perceive as a militant ideology of Islam. It’s a trend that has amplified since the deadly terror attacks conducted by Islamist extremists on French soil since 2015.

“Laïcité has served many governments a decoy to divert the public's attention from other important topics,” she said.

Although the headscarf is a frequent catalyst for the laïcité debate, the leading ladies are often missing from the discussion.

When October’s headscarf debate dominated French TV debates, French daily Libération’s fact checking site CheckNews counted 85 TV debates on the topic in one week. None of them featured a woman who was wearing the headscarf.

They did, however, include a male TV commentator who compared the headscarf with an SS uniform and another who proudly declared that he “hates the Muslim religion” and sometimes would “step off the bus” upon seeing a woman wearing the headscarf.

The first day Hania wore the headscarf to university her mother - who wears the more subtle, turban variant of the headscarf - looked a little worried.

“She told me I could take it off if I felt the need to do so,” she said.

Hania was visiting Rennes, a city in northwest France, eating lunch at a café when she saw a middle-aged couple talking to a staff member and gesticulating towards her. Puzzled, she went over, thinking maybe they knew her from somewhere.

When she reached them, the woman started screaming at her.

“She said ‘you are vermin, a parasite’, very hurtful things.”

After the incident, Hania tried to process what had happened. It had frightened her someone could become so angry just by the sight of her.

“I don’t blame them. I blame the politicians,” she said. 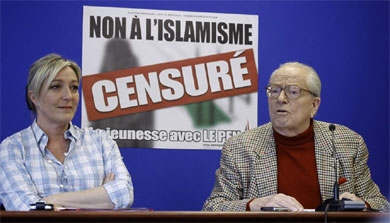 French far-right party Rassemblement National has long made what they see as a 'militant Islamism' their main target. Photo: AFP

Islamophobic acts have been on the rise in France the past years.

In October, when the headscarf debate was raging in French press, “there was an explosion of the number of anti-Muslim comments [on social media],” Jérémie Mani, Director of a social media moderating agency called Netino by Webhelp, told Le Parisien.

By analysing more than 5,000 comments randomly selected from 25 of the largest media organisations in France, Netino saw a broader, worrying trend. While the total number of hateful comments had decreased since the beginning of 2019, those specifically directed towards Muslims had increased.

“We all have a mother, sister or cousin who has been harassed on the street,” said Nadia Bouchenni, a French journalist, Muslim and co-founder of a web magazine specifically dedicated to minorities, Dialna.fr.

“It does not matter what the woman has done. She could have won a prize in a contest, but people would still be furious and pin her as an Islamist agent.”

Last spring, after the popular sports store Décathlon decided to take back its new ‘running Hijab’ to calm the storm of criticism, Bouchenni - who does not herself wear the Hijab except when visiting the mosque - decided to make an audio series with interviews of Muslim women, 'Paroles de femmes' (Women's speech).

“I thought it was time these women had their voices heard,” she told The Local on Tuesday.

“These women are French. They have nothing to hide.”

“Yet they can’t go swimming, running or visit public institutions with their children without being asked to take off their headscarf. Psychologically it’s very tough for them.”

For Hania, wearing the headscarf was not a decision she had made lightly.

“I needed to find out the ‘why’ before I decided to make it fit into my life,” she said.

Some Muslims consider the headscarf as required, others regard it as optional. After having studied the Koran and the Hadith, Hania decided that, to her, the headscarf was mandatory.

It was also a way to take back control over her own body.

“It’s funny, because we rarely talk about this. But it helped me as a woman,” she said.

“I was deciding what to show, when and how to show it.”

This point was crucial in explaining what Guénif called “the French obsession with what Muslim women do and don’t do.”

In a country where norms of masculinity and femininity still were important (“much more than in Anglophone countries,” Guénif said), some considered it "infuriating" that women wearing the headscarf “refused to turn themselves into sexual objects,” Guénif said, adding that there was a colonial aspect to it as well.

“The tendency in France is to say ‘these women need to be re-educated. They need to be taught how to live à la française’,” Guénif said.

“If the women defend themselves, they are pinned as ‘angry black women’’. Either way, they are racialised.”

Hania remembered how, when she was little, her mother would wear a hat instead of a headscarf to cover her hair. On public transport, her mother would always stand, never sit down. It struck Hania that - even after herself becoming French, even after having had French children - her mother felt illegitimate in France.

“She didn’t want to bother anyone with her presence,” she said.

“I think part of me is reclaiming her place when I wear the headscarf.”

For Hania, it was the criticism from other feminists she disliked the most.

“It's important not to let people say that I am a political tool because it's depicting me as a puppet. It’s a way of silencing my voice."

Hania said she was ready to take off her headscarf to become a teacher in public French school.

“But I will do so because teaching is more important to me than the headscarf. That’s the important part,” she said.

Original Headline:  ‘My body, my choice’ - French Muslim women speak out about headscarves