Divine Union through a mystical path: A seeker’s journey into the realm of Tasawwuf (or Sufism) is a corrective course 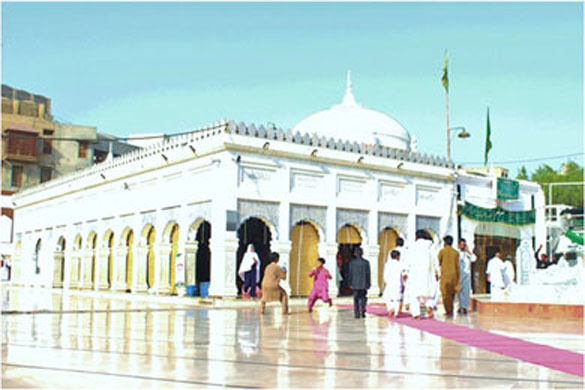 Shrine of Baba Farid, Pakpattan - Photo by the writer

More often than not, a narrative has the power to seek its own space. And sometimes there are ineffable energies throbbing to find expression, in verse, dance or music. A seeker’s journey into the realm of Tasawwuf (or Sufism, as recognized broadly) is a corrective course. Hence, to have a precise bearing in its broader context is seldom possible. However, there is a subtle line between choice and direction on the mystical path and several blessed ones perform their given roles and duties with devotion that eternalize their message for all times to come. One noteworthy example is of Khawaja Moin’uddin Hassan Chishty Ajmeri. 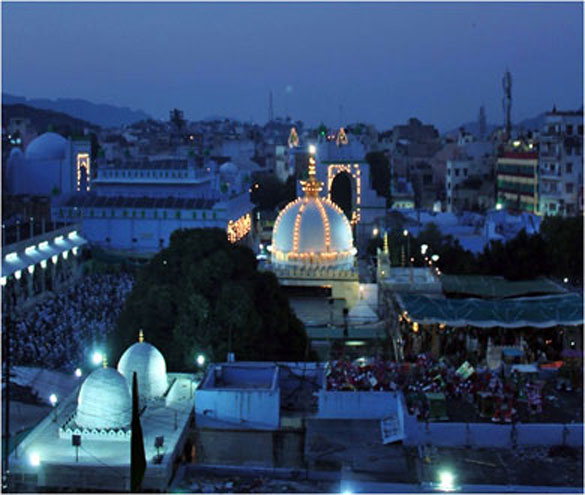 The political face of our contemporary world is a document of disaster. As people struggle to free themselves from the weight of war, famine and extremist ideologies, they search for an identity that is not contained within rigid religious dogmas. They seek a creed of love that binds and not breaks the organic chain of humanity.

A similar inner quest led Khawaja Moin’uddin Chishty (CE 1141-1230) to leave his home in Siestan, Iran, plundered by the Tartars who turned centers of peace, art and literature into rubble and dust. Weary of war, he spent around ten years attaining education in Theology, Hadith, Jurisprudence, Philosophy and oriental sciences in Bokhara and Samarkand after the completion of which, his teachers Maulana Sharifuddin and Maulana Hishamuddin bestowed him with a Jubba (cloak) and Dastar-e-Fazilat (Turban of Learning).

From there he proceeded for Baghdad, the centre of Learning. On his way, he met his Spiritual Master Shaykh Usman Hawruni in the city of Hawrun. Together with his Shaykh, they went to meet the Piran-e-Pir (Master of all Masters) revered by all sects of Islam, Hazrat Shaykh Abdul Qadir Jillani in Baghdad, who was also the maternal uncle of Khawaja Moin’uddin Chishty.

Khawaja Moin’uddin Chishty travelled to many places in the present day Mid-East and Central Asia for almost twenty years with his Shaykh or Spiritual Master Khawaja Usman Hawruni . He noted the discourses of his Shaykh in a book named Anis-ul-Arwah, which is preserved over the centuries. Samina Qureshi narrates in her illustrious book, Sacred Spaces:

“It was common for Sufis to wander for years” and adds, “The trials that disciples encounter n the mystical path can only be navigated with the help of a master who has become adept at the method and exercises of the Sufi doctrine.

At the end of this long period of devotional practices and spiritual training, Khawaja Moin’uddin Chishty went to Medina Sharif  with his Shaykh , where he was spiritually greeted by the Holy Prophet (PBUH) as:

In a directive dream The Prophet (PBUH) ordained him to infuse the spiritual hierarchy of Islam amidst the idol-worshipping pagan populace in Ajmer, Hind. Belonging to a distant area in the Province of Siestan in Iran, Khawaja Moin’uddin Chishty had never heard of Ajmer or travelled to Hind. With the blessings of his spiritual teacher he started his journey, stopping for a forty day solitary retreat (chilla) at the shrine of Data Ganj Baksh Ali Hajveri in Lahore. The following famous verse inscribed at the entrance of Data Ganj Baksh’s shrine was an invocation of Khawaja Moin’uddin Chishty in his reverence: 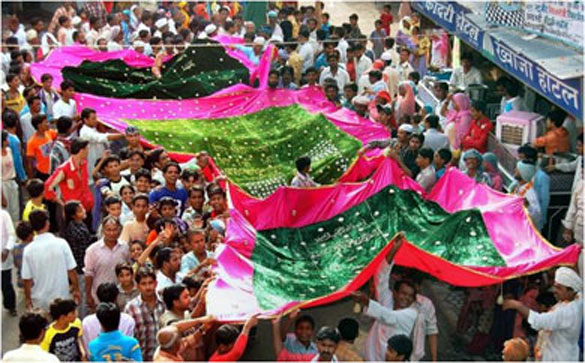 (Ganj Baksh (Bestower of Spiritual Treasures) grace to the world,  a manifestation of the Light of God, Spiritual Master for a novice (on this path); a perfect guide for the perfected)

The city of Ajmer thrived long before the arrival of Khawaja Moin’uddin Chishty. However, after his arrival, the majestic white dome of his shrine not only became the jugular vein of Ajmer but a sacred symbol of the Chishty Sufi Order in the sub-continent and beyond.

At the time of his appearance, Maharaja Prithvi Raj Chauhan was ruling over Ajmer till Dehli with an iron-fist.  He was perturbed by the growing popularity of the Muslim saint. He tried force, threat and even black magic through his court magicians Ajaipal Jogi and Shadi Dev to defeat the resolve of Khawaja Moin’uddin Chishty. However, his faith and resilience proved stronger than force, eventually turning the magicians into his followers and winning more hearts of the Hindu bastion through the excellence of his character and saintly presence. Sultan Shahabuddin Ghouri eventually defeated Prithiviraj Chauhan in the second battle of Terrain (1192) taking over the seat of Dehli. He visited Ajmer to meet the revered saint Khawaja Gharib Nawaz.

Khawaja Moin’uddin Chishty lived in Ajmer for a period of almost forty-five years and embraced people of all creed and caste into his spiritual fold. It was a tradition to build a khanqah (an institute) which was a learning centre for the traditional teachings of Islam. It allowed people of all faiths to come and learn. His worldly demise did not bring an end to his legacy. In fact it gained more fame with time and to date millions throng to the sacred centre of India, be them Muslims, Sikhs, Hindus or Christians, all swear allegiance to the great saint to find solace, peace and place him as mediating source to grant their wishes.  Akbar, the great Mughal king walked all the way from Agra to Ajmer in reverence of the Great Saint and donated a huge cauldron for langar (food for the poor is a key practice in the Chishty order) for the devotees of the Saint, which is still utilized to feed thousands at a time.

“Of all worships, the worship that pleases God is the grant of relief to the humble and the oppressed.”

Many Mughal kings donated capital for the building and upkeep of the shrine. A homage to Ajmer is considered a mini-pilgrimage due to the high stature of Wilayat  (Spiritual Sovereignty) of Khawaja Gharib Nawaz. He is also notably known as Khawaja Gharib Nawaz (Patron of Poor or Helper of travelers. Generally understood as poor, gharib here was initially derived from Persian, meaning traveler. Therefore, the title Gharib Nawaz also means, “helper of travelers”- as thousands took long and arduous journeys to pay homage to the great Saint, which, continue to date).

The entrance door of his shrine is inscribed with a Sufi saying in Persian, which means:

“This is the Kaaba of lovers, whoever comes here incomplete, leaves complete.”

On every sixth of the lunar month of Rajab, Sufi orders across the world celebrate the annual Urs of the great Saint Khawaja Moin’uddin Chishty. Urs is derived from the Arabic word Uroos, which means bride. The Sufis consider their day of physical parting from the world of forms into the realm of formless, as a time of union of the lover with his Supreme Beloved. This legacy is then celebrated on the date of their parting by their devotees with Sema/qawwali, quranic recitations and festivity.

Some of the other famous titles bestowed on him are, Khawaja Hind-ul-Wali (the Spiritual King of Hind), Qibla-e-Aashiqaan (The Kaaba of Lovers) and Ata-e-Rasool (Gift of The Prophet).  Khawaja Moin’uddin Chishty also wrote several books, letters and poetry, some of which is preserved to date. He continues to direct many saalikeen (seekers of the path) spiritually, however, in his lifetime, he endowed his Khilafat (spiritual succession) to Khawaja Qutubuddin Bakhtiyar Kaki (whose shrine is in Mehrauli, Dehli) and then to Baba Fariduddin Masud Ganj-e-Shakar, whose seat in Ajodhan, present-day Pakpattan Sharif, further spread the Sufi tradition of the Chishty order in the region of Pakistan and beyond.

“Perfection in faith is evidenced by three things: Faith, hope and Love”

He brought the spiritual legacy of the Chishty order in the sub-continent and to date millions continue to unite in this chain of “Faith, Hope, Love” and spiritual guidance to discover their inner self and outer reality.