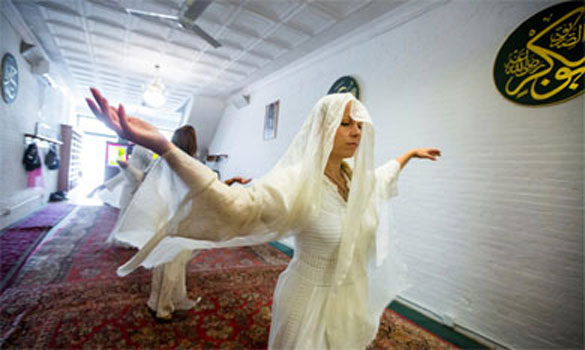 Habiba Farah during a whirling ceremony practiced by a Sufi order in TriBeCa that is led by a female sheikh. Credit Nicole Craine for The New York Times

On a leafy block of West 72nd Street, a Muslim Sufi order meets each Thursday evening, squeezing into Abdul Latif’s three-bedroom apartment. You don’t have to know Mr. Latif, born John Healy, to attend. Raised in the Yorkville neighbourhood on the Upper East Side of Manhattan, he greeted his guests in Arabic with a thick New York accent, inviting them to sit on the floor.

A group of about 10 beloveds, as they call one another, then stood and locked hands, forming a circle. Mr. Latif, 57, weaved around the ring, leading the chants in unison, including the 99 sacred names of God and prayers of adoration.

The participants — mostly American-born converts to Islam — squeezed their eyes shut; some gently swayed, letting themselves be carried away by the rhythmic mantras. The pace of the chants quickened, one man stamped his feet, another wept silently, and after 30 minutes the beloveds were captivated and perspiring.

Sufis call this practice Zikr and see it as a way of connecting with God and elevating themselves through communal meditation. Worshipers frequently lose themselves in a spinning frenzy, as with the well-known whirling dervishes.

Sufism, a mystical branch of Islam, has been cloaked in secrecy for most of its existence, having been forced underground by Ottoman rulers in the 13th century. Nowadays, however, many of these spiritual communities, like the beloveds in Mr. Latif’s apartment, are in plain view around the city if you know where to look. Some can even be found through a simple Google search.

The Murid order, for instance, meets in West Harlem and follows the teachings of its Senegalese founder, Ahmadu Bamba. The Tijaniyya group congregates on Fridays in a brownstone in Bedford-Stuyvesant, Brooklyn. The Naqshbandis meet on Saturday nights in a 19th-century church on Ninth Avenue in Manhattan.

Ahmad Khan Rahami, the New Jersey man whom the authorities blame for the Sept. 17 bombing in Manhattan, which prosecutors have said injured 31 people, is believed to have been inspired by radical Islam. American Muslims’ condemnations of the attack were immediate, but some were accompanied by concern that it could provoke anti-Muslim hysteria.

The Council on American-Islamic Relations, or CAIR, a civil liberties organization, issued a statement that said, “Our nation is most secure when we remain united and reject the fear-mongering and guilt by association often utilized following such attacks.”

Annmarie Agosta, who grew up in an Italian-American family in Brooklyn and became a Sufi in 2009 after exploring Paganism, Wicca and Buddhism, seemed to agree with this statement. “I feel a deep responsibility to stand for the true message of Islam, which is peace, tolerance, and compassion,” Ms. Agosta said. “This is the message of Sufism.” As a lesbian advocate for gay rights and a member of a congregation in TriBeCa, she led a service to honour those killed in the Orlando, Fla., massacre this summer.

Many Americans anxious about domestic terrorism, however, are not interested in the nuances of various branches of Islam. And paradoxically, Sufis are often shunned by conservative Islam — the sect is dismissed as a diluted version of the faith, prioritizing the esoteric over the orthodox.

“Sufism has never been embraced by mainstream Islam,” said Daisy Khan, founder of the Women’s Islamic Initiative in Spirituality and Equality and one-half of the couple who in 2010 sought to open a community centre in Lower Manhattan, mislabelled the “ground zero mosque.”

For Ms. Khan, the ethereal buzz of Sufism is its great appeal, a faith that is “beyond the realm of this world,” dealing with the “supernatural, the magical and love.”

“Despite bad press,” she said, “people are still becoming Muslim and Sufi.”

It is an interesting time to choose to become a Sufi.

Before he became a beloved among Mr. Latif’s group on the Upper West Side, Bjorn Bolinder had come to New York from Minnesota with dreams of performing on Broadway. His father was a Baptist minister, and his childhood consisted of regular church services and Sunday school. “I didn’t feel connected to the divine there,” he said. “I had no experience of joy or aliveness.” He began seeking religion for himself in his mid-20s and came across Sufism through self-help spirituality books and a healing therapist.

Mr. Bolinder, now 39, described an early spiritual moment as a downpour of light so bright that he had to open his eyes to double-check that the room lighting had not changed. “I suddenly realized that maybe this is God, not whatever I learned in church,” he said. “I felt like a completely different person. It was just so beautiful.”

Over the next few years, between auditions for acting roles, Mr. Bolinder continued his spiritual exploration, fasting, learning prayers and attending conventions. Most of Mr. Latif’s Upper West Side group regularly attended a Sufi retreat in Pope Valley, Calif., where the beloveds would meet with their grand sheikh, Sidi Muhammad Al-Jamal, a Palestinian cleric who died in November at 80. This is where Mr. Bolinder and other members took their “Sufi promise,” a pledge of allegiance to their teacher and God in a formal ceremony, in return receiving their Sufi names. Mr. Bolinder’s is Abdullah.

Tall and blond, Mr. Bolinder doesn’t dress in a way that identifies him as a Sufi or a Muslim, although he occasionally thumbs his prayer beads on the subway. But having a Sufi name makes him part of a spiritual community. Five years after his “coming out as a Sufi,” he said, his parents are supportive, and his father has even taken a Sufi course on Jesus, who appears as a prophet in the Quran.

“I feel sad for Muslims who don’t acknowledge Sufism as part of the breadth of the divine,” Mr. Bolinder said. “We are all one. They’re missing out.”

Sufism cuts across all sects of the faith. “You can be a Shia or a Sunni or any type of Muslim and still be a Sufi,” said James W. Morris, professor of Islamic thought and history at Boston College.

Sufis cluster into Tariqas, or spiritual orders, that are headed by a grand sheikh who may live in Cairo, but are led day to day by a local sheikh who could live in Queens.

While few reliable estimates exist of the number of Sufis in America, Islam over all is rapidly growing. The Pew Research Centre estimates that by 2050, Muslims will become the second-largest religious group in the United States, after Christians, totalling over eight million people.

Discussing that growth, Khalid Latif, chaplain of the Islamic Centre at New York University, said that in the city, “there’s an absence of spirituality and stillness,” and that even in times of heightened anxiety in the West about Muslims, the centre saw a steady stream of the curious. He said that for many Americans, Sufism was an appealing first step. 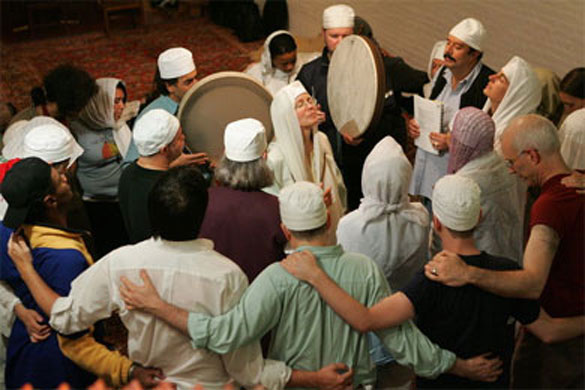 Tourists and shoppers in TriBeCa could easily miss the discreet blue plaque on a three-story building on West Broadway between a tavern and a brasserie. It reads, “Dargah Nur Ashki Jerrahi Sufi Order.” Inside is where New Yorkers are most likely to encounter whirling dervishes.

Visitors, once they have removed their shoes, enter a prayer hall with a high ceiling and ornate green and gold Arabic calligraphy spelling out the Prophet Muhammad’s name decorating the walls. Books and prayer rugs are strewed about, and a table is laden with sweet Turkish tea and dates. A woman’s voice drifts across the hall, performing the public call to prayer — a role traditionally reserved for men.

What makes the order most unusual is that its local sheikh is a woman: the former Philippa de Menil, 69, part of Texas oil aristocracy. She became a Sufi in the 1970s, and, now known as Sheikha Fariha al-Jerrahi, has led the Nur Jerrahi order since its founder’s death in 1995.

Wearing a flowing white gown, her hair half-wrapped in a blue turban, Sheikha Fariha completes the call to prayer and summons the group’s members to stand side by side, avoiding the more orthodox Islamic practice of positioning men up front.

Sheikha Fariha gives few interviews, and she declined to speak to a reporter, but her long-time secretary, Abdul Rahim, answered questions about the congregation. A female sheikh shouldn’t be viewed as unusual, said Mr. Rahim, who was born Thomas Rippe and grew up in Brooklyn. “We don’t put an emphasis on women; we emphasize equality,” he said. “We think of it as a certain kind of maturity.”

The order has no dress code and no rules on sexual orientation. Indeed, the order is so liberal that some members don’t even label themselves as Muslims.

This kind of unorthodox approach, said Marcia Hermansen, director of the Islamic world studies program at Loyola University Chicago, is both the root of Sufism’s appeal and its weakness. Charismatic leaders like Sheikha Fariha have spurred Sufism’s growth in America, she said, with New York in particular attracting “loosey-goosey liberal Sufism.”

And yet for all its liberal trappings, Sufism cannot be detached from Islam. “Sufism isn’t just a label you wear; it’s a state of being,” said John Andrew Morrow, an Islam scholar and author. “You can’t pick and choose parts of Islam, and you can’t mislead sincere people, drawing them into Sufism without telling them this is fundamentally linked to Islam.”

Part of this problem, he said, is the American tradition of “spiritual vagabonds.”

“They bounce around from one spiritual tradition to another,” he said, “like going to a buffet.”

Like the Shadhili group on the Upper West Side, Jerrahi members participate in long Zikr services; theirs last until the wee hours. During a recent session, members formed a sitting circle, perched on low wooden stools and placed their hands on their hearts, swaying as they sang a communal tune. One man lightly tapped out a beat on a Persian drum; another young woman passed around a hymnbook, in English, so that newcomers could sing along.

A few late worshipers trickled in and joined the circle, hastily removing their shoes and respectfully bowing in the direction of Sheikha Fariha, who had the bearing of a slightly bossy school principal. During the service, one man discreetly made to leave the room. Her eyes tightly closed, legs crossed and back straight, Sheikha Fariha snapped, “Where are you going?” The man jumped at being noticed and sheepishly replied, “To the restroom.” She dismissed him with a wave of her hand without ever opening her eyes.

Sitting on the floor of the main prayer hall was Juliet Rabia Gentile, 36, who has belonged to this order for more than a decade. “I was always interested in Sufi culture: music, dance, art and the works of the Persian poets Rumi and Hafez,” Ms. Gentile said. “It was definitely more of a cultural rather than spiritual interest at first.”

Her upbringing in New York City was Christian. “Initially, my family thought I was experimenting and it would probably go away after a couple of years,” she said. “Certain friends were surprised I’d become a Muslim, especially post-9/11.”

The group’s female leadership was a lure for Ms. Gentile, who is proud that American Sufism has cultivated an atmosphere of acceptance. “Our Sheikha is an unusual product of American religious freedoms,” she said.

But she is also aware that Sufis are in a difficult position, both within Islam and within American culture. “Sufis nowadays are under attack and called heretics,” she said. “It’s ironic given all the Islamophobia; there’s been a surge of growth of interest. People just want to understand.”

Ms. Gentile doesn’t wear the headscarf outside the Dargah. “I can sense that the vibe here is changing,” she said. “Americans have reached heightened paranoia in the two years since ISIS emerged. People are becoming irrational.”

She said her fellow New Yorkers were less likely to be swayed by panic. But she is nonetheless wary. “Fear is a strong drug,” she said.