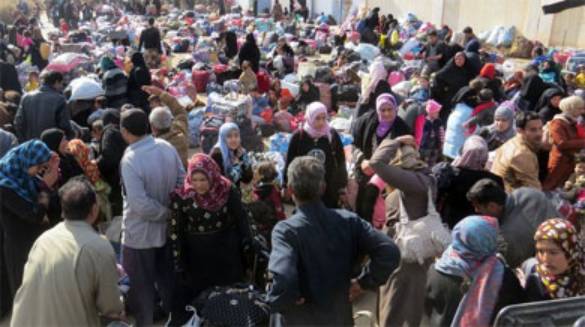 Iraqis who fled regions controlled by the Islamic State near Falluja arrived on the eastern outskirts of Ramadi on Tuesday after pro-government troops retook the area. Credit Moadh Al-Dulaimi/Agence France-Presse — Getty Images

When Iraqi ground forces and American aircraft began assaulting the city of Ramadi more than a month ago, Ghusoon Muhammed and her family fled to the government’s front line, as did many other Sunni Arab families who had been trapped for months. Soldiers sent her and the children one way, and her husband another, to be interrogated in a detention facility.

She has not seen or heard from him since. She and her children, who will most likely not be able to go home to Ramadi for months given the destruction, have been left to wait in a ramshackle tent camp here in Anbar Province. She is desperate, and adamant: “The innocent people in jail need to be released!” she said.

Standing nearby on Sunday was another woman, Karima Nouri. Her son, an auto mechanic, was also taken away by the authorities, and she has had no word about him for weeks. Ms. Nouri said the government considered civilians who remained in Ramadi to be sympathizers of the Islamic State. “But we had no ability to leave,” she said. “We are very poor.”

The retaking of Ramadi, the provincial capital, has been held out as a vital victory by Iraqi officials and their American allies, and one of the most crucial first steps in the government’s reclaiming Anbar Province and other Sunni Arab places.

But even as military goals are being met, Sunni families like those of Ms. Muhammed and Ms. Nouri are still voicing their fear and resentment of the Shiite-dominated government in Baghdad, suggesting that the broader goal of political reconciliation is not yet being served. Their grievances today echo those that initially allowed the Islamic State, also known as ISIS or ISIL, to prosper two years ago as it began seizing territory from the Iraqi government.

As the military campaign in Anbar shifts its focus to Hit, an Islamic State-controlled town in the Euphrates Valley, critics say the American approach to Iraq is short-sighted in its focus on military gains without a political program to back them up. At the same time, each victory over the Islamic State sets off new humanitarian crises that Iraq and other nations have struggled to face. It seems to be the opposite approach to Syria, where the Obama administration has long said it sees no military solution and has pushed diplomatic efforts to broker a political settlement.

“There is no political architecture that will convince any Sunni over the age of 3 that he or she has a future with the Iraqi state,” said Ryan C. Crocker, a former American ambassador to Iraq and the dean of the George Bush School of Government & Public Service at Texas A&M University.

He continued, “The administration is trying to use a limited military weapon to defeat an adversary that only a political offensive can overcome, and we’re not willing or able to make that effort.”

Without political reconciliation and an ambitious program to rebuild the Sunni areas destroyed by the war — or at least restore vital services like electricity and water — these places are likely to be fertile ground for the Islamic State far into the future.

Kenneth M. Pollack, an Iraq expert at the Brookings Institution in Washington, worried that military gains in Iraq without political overhauls would be counterproductive. “At some point, they make things worse,” he said.

Anbar, a region of vast deserts stretching across about a third of Iraq’s territory, is where the Islamic State first flourished, having risen here in the crucible of the American occupation as Al Qaeda in Iraq. The effort to pacify the province cost the lives of more than 1,300 American soldiers and Marines, billions of dollars in aid and intense efforts at reconciliation that resulted in the Sunni Awakening, the program that saw tribal leaders paid to switch sides and fight against Al Qaeda.

The group re-emerged as the Islamic State, strengthened, after the Americans left and as a response to the sectarian policies of former Prime Minister Nuri Kamal al-Maliki, who failed to deliver on a promise to incorporate the Awakening groups into the security forces.

“Daesh didn’t come from the moon,” said Sheikh Faisal Essawi, the mayor of Amiriyat Falluja, using the Arabic acronym for the Islamic State. “It did not grow from the earth. Part of our people became Daesh. Because of corruption. Because of injustice. Because of the culture of hate.”

Ramadi, a city once numbering hundreds of thousands of residents, is free of the Islamic State, but it is ruined. About $10 million has been committed to pay for the first steps in restoring services so civilians can move home. That money is for the United Nations to buy generators and set up rudimentary health clinics. But the Iraqi government, facing a financial crisis amid collapsing oil prices, has little to spend on programs that would rebuild and stabilize Anbar, said Sohaib al-Rawi, the provincial governor.

Ramadi itself is so embedded with explosives left behind by the Islamic State that, at the current rate of clearing, it will take nine months before civilians can return, said Lise Grande, the United Nations’ humanitarian coordinator for Iraq. And that does not take into account the rebuilding of homes that will be needed.

“The level of destruction is as bad as anything we have seen anywhere in Iraq,” said Ms. Grande, who is trying to raise tens of millions of dollars from the international community to at least fix basic services in Ramadi.

Col. Hameed al-Janabi, who leads the bomb disposal crew of the Anbar Police Department, said that more than half of the roughly 40 officers he oversaw who had received American training in years past from the United States were dead. With few experts available and no money, Mr. Rawi said he has asked local men with at least some experience with explosives to do the work, on the promise of future payment.

As time stretches on, officials worry that the tent camps that hug the winding highway here, and the mosques and squatter settlements in Baghdad where civilians from Anbar also live, are only incubating the next generation of militants.

In nearby Falluja, under the control of the Islamic State for more than two years, longer than any other city in Iraq and Syria, the government has the city under siege. In doing so, it is mimicking tactics by President Bashar al-Assad of Syria that have outraged the international community.

At least 10 people have starved to death and medicine is running low, he said. The Islamic State has warned civilians — there are tens of thousands left in Falluja — that the government will take the men should they try to escape.

“This message is to all the honest people in the world,” said a woman in Falluja reached by telephone who gave her name as Umm Muhammad. “We are caught between the injustice of ISIS and an unknown future with the government that will accuse of us of being with ISIS.”

The United States has pushed Prime Minister Haider al-Abadi to offer political concessions to Sunnis, such as creating a national guard to incorporate more Sunnis into the security forces and criminal justice reforms to empty the jails of Sunni men. But those efforts have amounted to little.

“He has the willingness, but he hasn’t made any reforms,” Mr. Essawi, the mayor, said. “He has no power, to be honest.”

That is because much of the power in Iraq is held by Iran, the region’s dominant Shiite power that controls militias widely seen here as the real protectors of society. Those groups, and the politicians allied with them, have opposed efforts by Mr. Abadi to accommodate Sunnis.

In the wake of the deal last year between the West and Iran to curtail its nuclear program, there was hope that the United States and Iran could work more closely in Iraq to fight the Islamic State and support the Iraqi government. That has not happened. Efforts by American diplomats in Baghdad to meet with their Iranian counterparts have been rebuffed.

Mr. Crocker, the former ambassador to Iraq, said he had given up hope that the Obama administration would become more deeply engaged in seeking a political accommodation between Iraq’s factions. But he and Mr. Pollack, along with other experts on Iraq, have joined a task force organized by the Atlantic Council, a research organization based in Washington that will make policy proposals on Iraq to the next administration.

“Unfortunately, that’s 11 months away,” he said.

“The Islamic State rose because of a political vacuum,” he noted. “It wasn’t a military success but a political failure that allowed it to take hold.”