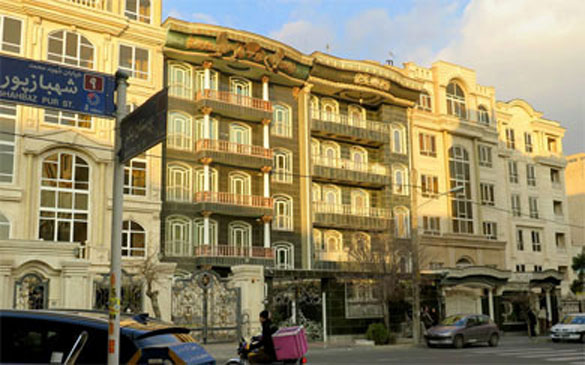 Imam Aziz Babaei's Sunni mosque is located unobtrusively within this upscale Tehran neighborhood. It's one of the few Sunni mosques permitted in the city. Steve Inskeep/NPR

We've been talking with a Sunni Muslim who lives in Shiite-dominated Iran. He's a member of one of the two great sects of Islam, which are increasingly seen in conflict. His story suggests just how perilous that conflict could be.

Last month, a crowd in Tehran attacked the embassy of Sunni-dominated Saudi Arabia. They were protesting Saudi Arabia's execution of a Saudi Shiite cleric who had criticized the Saudi government.

The Iranian torching of the Saudi embassy became another episode in the cold war between these two regional powers. It also underlined an awkward reality: Religious faiths don't obey the borders on a map.

An Iraqi protester holds a poster of Shiite cleric Nimr al-Nimr, who was executed in Saudi Arabia, during a protest Monday in front of the gate of the Green Zone in Baghdad.

They include the Sunni preacher who opened his door to us last week in western Tehran.

We had to ask around the neighbourhood to find this place of worship. It has no dome. There's no minaret. You might compare it to an American storefront church, except there's no storefront.

You just have to know it.

Aziz Babaei, the imam, wearing a white turban and gray clerical robe, laughed when he was told that Americans had found him here.

Leaving our shoes at the door, we walked into a carpeted prayer room and settled into plastic chairs to talk.

He welcomed us to his mosque. That is, "We call it a mosque," he said, though it doesn't quite meet the formal definition. He said it's a rental property, not permanent, as a mosque is supposed to be.

He signaled his wife to bring tea as we talked.

"What's it like to be a Sunni among so many Shias?" I asked.

We live together nicely, he told me.

He takes exceptional care to make it so.

When Shiite mosques issue their five calls to prayer every day, they're amplified through loudspeakers and echo down every street. But the Sunni man who sings the call to prayer for this mosque does it indoors, so few people hear.

This worship space is so obscure that some foreign news articles have stated as fact that there is no Sunni mosque in Tehran at all.

The imam says he came from western Iran, near the country's border. It's near the borders, drawn long ago, that the largest numbers of Sunnis can be found. Sunnis moved to the capital for work, and Aziz followed to look after their souls some 20 years ago.

His flock has grown. Some custodians of the upscale homes in this neighbourhood are Sunni refugees from Afghanistan. They worship at Babaei's hidden Sunni mosque.

But tolerance only goes so far.

Babaei says the administration of Iran's former president tried to shut down this worship space. Hassan Rouhani, the current president, is publicly more tolerant — but the State Department says Iranian Sunnis have been imprisoned for their beliefs. And news reports have said at least one Sunni place of worship in Tehran was shut down last year.

I asked him what he thinks when he hears news of an illegal Sunni worship space being demolished in Tehran.

"Demolish" is not the right word, Babaei insisted. He said improvised mosques are usually shut down just for violating building safety codes.

It goes without saying that a Sunni in Iran must speak with care.

Through our interpreter, Aziz Babaei said he condemns the burning of the Saudi Embassy in Tehran. But he also condemns the act that prompted it, the Saudi execution of the Shiite cleric.

I asked if Iran's security officials come in and check his mosque from time to time.

"Yes," he said. Sometimes intelligence agents come here openly to talk. Sometimes they're invisible, joining the hundreds of worshipers prostrate on the floor.

The imam said he's been telling all Sunnis to be careful. One radical act could bring pain on the whole community.

The visiting security agents gave him a crucial insight: They said Iran's Sunnis will be safe so long as the Islamic Republic does not view them as a threat.

At least in that respect, the security men added, Sunnis are no different than any Shiite.