After Pakistan’s independence, we changed the names of the buildings, streets and roads named after prominent personalities from the days of the British Raj, who played a vital role in Karachi’s development. The practice has not ended yet. 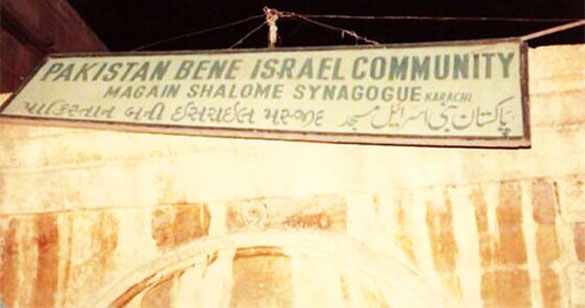 Similar was the fate of the Jewish and Hindu communities of Pakistan. There were some fortunate failures in erasing the archeological and developmental traces of the Raj from Karachi. However, when it came to ridding Karachi of the traces of Hindus and Jews, no stone was left unturned. Our hatred for the Jews goes a long way into the past. The Jews knew it, too. That is why they left the country for good and chose to make Israel their home.

In her book ‘Malika-e-Mashriq’ (Queen of the East), Mehmooda Rizwiya has written about the Jewish presence in Karachi. On page 146 of the said book, the author tells us that the Jews are settled in Lawrence Quarters… That a majority of them belong to the working class… That they are commonly known as ‘Bani Israel’ (the tribe of Israel)… Their ways of butchering edible, kosher animals is different. She also tells us that they have a cemetery and a haikal (synagogue), and that they are very few in numbers, and are mostly educated and well off.

In the Sindh Gazetteer of 1907, Edward H. Aitken mentions that according to the 1901 census, the total population of Jews [in Sindh] was 482 and almost all of them live in Karachi. They are mostly from the Bani Israel community, it further states.

In his book ‘Karachi Tareekh Ke Aaeene Mein’ (Karachi in the Mirror of History), Muhammad Usman Damohi writes on page 652 that the Jews only had one cemetery in Karachi, located south-east of the Haji Camp area. It was called the Bani Israel Cemetery.

Mehmooda Rizwiya writes that the Old Jewish Cemetery is adjacent to Usmanabad and is in the south-east of the Haji Camp. She has also mentioned two synagogues in Karachi. Before we move to the two synagogues, we should be aware of how the migrant Pakistani Jews dwellings in Israel are doing and what they think of Karachi.

Renowned author, journalist and columnist, Muhammad Hanif once had the opportunity to visit Israel. Associated with the British Broadcasting Corporation, Hanif’s travelogue of this tour was broadcast from the BBC. It was later published in the renowned literato Ajmal Kamal’s monthly Aaj magazine in 2001 (edition no. 35).

In his travelogue, Hanif writes of an event that he attended during his visit to Israel. He says at the end of the event, the organisers suddenly remembered that Hanif had not delivered his speech, so they grabbed his arm and brought him on stage. Hanif writes, “I spoke and told them that I was not from India but Karachi, I said and I had come on account of some business. And then I went on to say how glad I was to see them etcetera… Upon hearing of my origins, a man sitting in the first row began sobbing. As soon as I stepped off stage, this man, probably in his later 40s then, obese in outlook and dark in complexion, came to me and took me to a corner where he embraced me like a long lost brother. This man was Daniel from Karachi’s Soldier Bazar. “I have not seen anyone from Karachi since 1968,” Daniel, still sobbing, told me. “I used to study there in an English medium school. We had our own mosque. Ayoub Khan (the then President of Pakistan) even sent police for its protection during the war of ‘67.”

Hand on his chest, Daniel then said, “We had no problems there (in Pakistan). No one ever said a bad thing to us. We just saw all the Jews were going to Israel and we followed. Do you know Zafar Khan of Soldier Bazar?”

Daniel is a factory worker in Israel. He is married to an Indian Jewish girl and is a father of two. He says it is his wish to visit Karachi once before he dies. “We hear there is another military government in Pakistan?” Daniel said, in a tone suggesting he already knows the answer, adding; “Only they can run the country.””

Hanif writes further that Daniel told him he was not happy in Israel, especially in Ramallah. When asked why by Hanif, Daniel replies, “You know how we, Pakistanis and Indians, are different from one another. They can never like us, nor we like them. We are only a couple of families here. My wife is an Indian, but it is just not that thing, you know.” Hanif tells him, “But these are your Jewish brethren,” to which Daniel instantly replies, “Yes, yes, but in the end they are Indians.”

We were about to explore the Jewish synagogues of Karachi. The most famous among these was the building of the Magain Shalome Synagogue of the Bani Israel Trust. It is still known to the people of Karachi as the 'Israeli Masjid' or the 'Yahoodi Masjid'.

An old friend and senior journalist, Mr. Zarrar Khan, who used to live in the Ranchore Line area up until the 70s, related an eyewitness account that the synagogue was situated at the central square of Ranchore Line, where now in its place stands a tall building called the Madiha Square. Zarrar also said that the official name of the street then was 'Synagogue Street'.

My friend, Qazi Khizr Habib was of much help in this regard. He told me that the last trustee of the Bani Israel Trust was Rachel Joseph who transferred the power of attorney of the building to a Mr. Ahmed Ilahi, son of Meher Ilahi. There was an agreement that a commercial building was to replace the synagogue. Furthermore, the ground floor of the new building would have shops and businesses, while the first floor was to become the new synagogue. The agreement was duly followed initially, and the synagogue was constructed. However, after a while, the synagogue was replaced by residential apartments. This resulted into litigation between Rachel Joseph and some other people representing the second party. The case was won by Rachel and her attorney.

I spoke with a lawyer friend of mine, Mr. Younas Shad, and through him I approached Rachel Joseph’s lawyer. He told me Rachel had moved to London quite some time ago.

In her piece on the Bani Israel graveyard, published in Dawn on the 6th of May, 2007, Reema Abbasi refers to her conversation with Rachel Joseph. They talked about the cemetery, of which Rachel was the last custodian. This proves that Rachel was in Karachi till the year 2007. Later, she chose the Bani Israel path of migration.

Our next stop was the Jewish cemetery. I asked for help in this regard from my journalist friend Ishaq Baloch. He lives in the Golimar area. He told me the graveyard is looked after by a Baloch family. He further told me he had visited the place once, but the guarding Baloch family allowed him to enter the graveyard only after so much of cajoling; and that, too, without a camera. This was frustrating for me. Ishaq suggested that I speak to the young journalist, Abu Bakar Baloch. Ishaq sahib said that Abu Bakar’s family was on good terms with the Baloch family guarding the cemetery.

I went straight to Abu Bakar and told him how desperate I was to get into the graveyard. He said, “We will go there on Sunday and see what we can do.”

On the decided day, I went to Abu Bakar’s place in Lyari’s Nawa Lane area, whence we went to the Mewa Shah graveyard. There, Abu Bakar pointed out a woman who was selling flower petals at the gate of the Cutchi-Memon graveyard. As soon I went forward and greeted her, she gave me a disgruntled look, sensing immediately that I was not there to buy petals. She said in Urdu, “You cannot go inside.” I looked at Abu Bakar’s face. He spoke in Balochi and told her with whose reference we had come.

Cleaning the branches of a Niazbo (Holy basil), the woman looked at us in disbelief. She then repeated her previous answer in Urdu. However, now her tone was not as hard as it was before. I felt it was the right moment for me to utilise my lifeline of the Balochi language. So, I started talking to her in both our mother tongue, requesting her to let us visit the cemetery.

Her replies, now in Balochi, were directed at me. Almost completely ridding her tone of the sourness she earlier welcomed us with, she said,

People came before you as well. They only took pictures. They had told us they will fix the graveyard; that its boundary wall will be raised. Nothing happened.

“We have raised the walls ourselves, otherwise people would have stolen the marble [from the tombstones],” she said discontentedly. 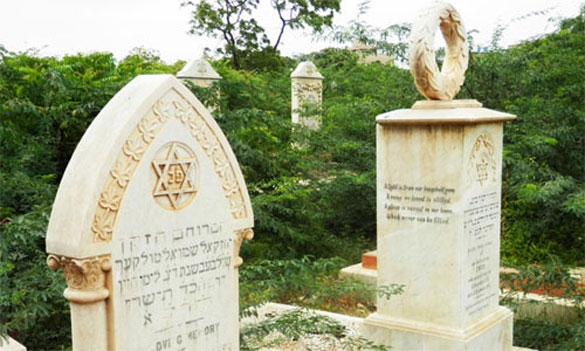 During the conversation, she kept on giving us reason to be disheartened, not once flinching from her stance that we were not to enter the graveyard. I, on the other hand, kept on trying. Finally, teased to her toes, she told us to come by on Monday and meet her son. We were about to take leave, when a man riding a motorcycle entered the scene. It was the woman’s son, Arif. He gave us a quizzical look. His mother told him who we were and the purpose of our visit.

Arif was his mother all over again in the beginning, stating firmly, and repeating, that we were not to enter the cemetery. The only difference was that he was way less sour than his mother. I started talking to him in Balochi, trying to convince him. As soon as I noticed traces of wonder and acceptance in his eyes, I reiterated how important it was for me to visit the graveyard. After some reasoning, he finally agreed. He did lay down a condition, however, that only one man could go with him. I accepted without a second thought.

At last, I was standing in the premises of the graveyard. The next round was that of clicking some photos. The graveyard was buried under untamed, thorny vegetation. I slowly took the camera out of my pocket and started taking pictures. Arif saw this and, to my relief, allowed me to take as many pictures as I wanted, since I was his Baloch brother. Meanwhile, he was repeating what his mother had earlier informed us about, adding that he used to clean the graveyard himself. However, last year he had a motorbike accident in which he broke his leg, so the task had become too arduous for him now.

Arif told me that about a year ago, a man called on him, informing him that some people wanted to meet him at the Sheraton Hotel. Arif went there and met four persons who inquired about the graveyard’s state in detail. They did not visit the place, Arif added. He says some people come by sometime, mostly for photography, while making big, hollow promises. In the end, Arif concludes, nothing happens as usual.

I wondered if the people of Bani Israel should be thankful that the graves of their beloveds in Pakistan were being watched over by a group of Baloch people. Otherwise, it too, would probably meet the same fate as the 'Yahoodi Masjid'.

Akhtar Balouch, also known as the Kiranchi Wala, ventures out to bring back to Dawn.com’s readers the long forgotten heritage of Karachi. Stay tuned to this space for his weekly fascinating findings.