Muslim History of the Theory of Evolution: A Challenge to Traditional Adam Story

In our country, USA, sadly, science is never discussed in the Islamic centres even though science is the driving force of the economy of any country.  The result is reflected in the performance of Muslims high school children in the prestigious Intel Talent Search in Science. In its list of three hundred semi-finalists every year for the past eight years, there were 0-3 traditional Muslim names. But there are 58-62 Hindu sounding names and many Chinese names.

At personnel level my son, while in high school, asked me, “Dad, you send me to the best school around our home to study science. You send me to the Islamic Center to study the religious truth. Science says that human beings evolved from earlier species, but the Islamic Center informs us that humans were initially created in Heaven and came to earth fully formed. The teacher provides us lots of evidence for evolution but Islamic Center does not give any proof, but tell us to believe. What is the truth?” His question led me to study the creation/evolution topic.

Unlike contemporary Muslim scholars and Imams, I do not believe that the theory of evolution is a dangerous idea, but a great idea. I have drafted four questions and its answers to justify the theory as a great idea.

2.       Why do Muslims must investigate origin of life and human species?

3.      What was the Pre-Darwin Muslim scientific perspective of the origin of life and human?

4.      Is there conflict between Muslim and scientific explanation of human origin?

5.      Are there verses in the Qur’an and its tafsir that suggest the creation of human from a different

1 Why do Muslims need to study the origin of life and human?

There are many practical applications for the theory of evolution. One of the practical applications of the theory lies in the discovery and use of Taxol, a drug used in the treatment of breast cancer, lung cancer, and ovarian cancer. Initially, Taxol was available only from low-growing Pacific yew tree initially. Three trees had to be destroyed to provide enough Taxol to treat one ovarian patient, meaning that about 38,000 trees a year would have to be destroyed to treat ovarian cancer patients in the United States alone, according to the National Cancer Institute. So, the research in the evolution of the Pacific yew tree leads to more sources for Taxol in other closely related trees.

Moreover, the Qur’an demands the study of the origin of life and human. The Quran 29:20 states:

2.    What was the Pre-Darwin Muslim scientific perspective of origin of life and human?

There were many pre-Muslim evolutionists’ centuries before Charles Darwin. Many Muslims may ask, how can anyone with a faith in God believe in the evolution of life while the theory rejects God? They may argue that the phrase, Muslim evolutionist, is oxymoronic. Let me show you that it is definitely not an oxymoronic term. I need to borrow two technical terms, genotype and phenotype, from standard biology textbooks to explain it.

Genotype is defined as the complete set of genes of a plant or animal population while phenotype means the outward manifestations of genotype. Every living being on the earth, seen by our naked eyes, is only a projected image of the genotype. In other words, the chemistry of the genotype determines how every living being seems to our sight. Let me introduce these two terms into our creation/evolution discussion.  If the creation is genotype, evolution is phenotype. Based on this definition of creation and evolution, the early Muslims’ scientific understanding is: yes, it is creation but it appears to our naked eyes as evolution connecting all living beings together. Therefore, the term, Muslim evolutionist, is not oxymoronic.

2. Is there conflict between the Pre-Darwin Muslim and scientific explanations of human origin?

In order to answer the question, I chose three pre-Darwin Muslims out of many who lived long time before Charles Darwin. They are Ibn Khaldun (over 400 years before Darwin), Imam Al-Razi (700 years before Darwin), and Al-Biruni (900 years before Darwin). I have gathered seven core elements of the theory of evolution. They are 1. All forms of life came to existence by evolution, 2. Species change by Mutation, 3. Cumulative change in the genetic makeup of a population results in the birth of new species, 4. Natural Selection: Preservation of plants and animals with proper standard and destruction of poor quality, 5. Competition and survival, 6. Laws of Nature drives Evolution, and 7. Human Species belongs to the Animal Kingdom.

In the following slides, each of these core elements of the theory of evolution are juxtaposed against what the pre-Darwin Muslim scholars had written about the origin of life and human species against. 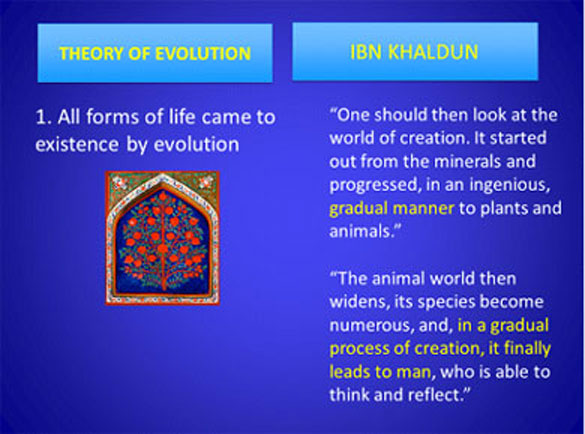 So, the theory and Ibn Khaldun agree that life evolved from nonorganic realm into progressively complex life forms in a gradual and timely manner with the emergence of human on the tree of life as one of the distal twigs. 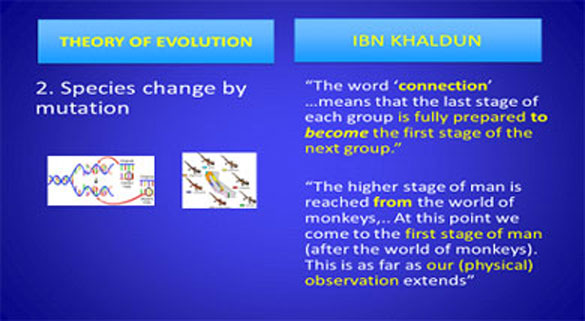 Both modern science and Ibn Khaldun agree: The nature transforms one species to another. Pre-Darwin Muslim scholars believed human family was created from the ape family. But now we know human species was not evolved from monkey but ape family and human family have a common ancestor. Ape and human species are distant cousins. Secondly, the sentence, “At this point we come to the first stage of man (after the world of monkeys),” suggests that the pre-Darwin Muslims knew about the existence of other hominid species. Thirdly, physical observation of the nature led Muslim to the idea of evolution of life. That is why Ibn Khaldun states: “This is as far as our (physical) observation extends.”

The third element of the theory of evolution is in the next slide. 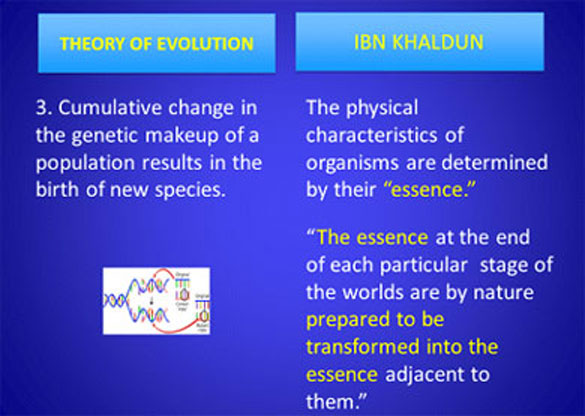 If we introduce our modern technical terms of biology to Ibn Khaldun, he would have written the above sentence as in the next slide.

The fourth element the theory is Natural Selection. According to it, the species with advantageous traits reproduce and outlive those with weaker traits. 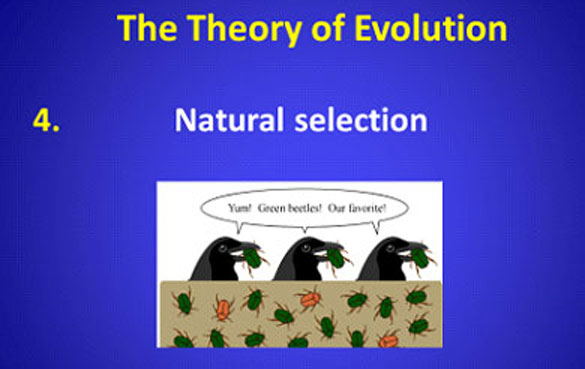 In this illustration the birds love the green bug. The orange colour is an advantageous trait in this scenario and so the orange coloured bugs without the bird as a predator reproduce and outlive with green bugs. This is what Darwin called Natural selection.

The fifth element of the theory of evolution is competition and survival. 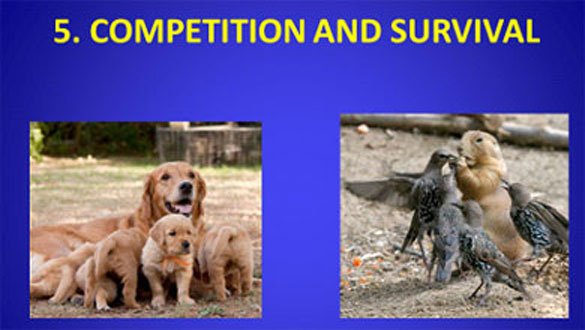 Most animal and plant species reproduce much more offspring or babies than needed to maintain the population as shown in the left side of the slide. But the space and food are limited. So, the babies in their own generation compete each other and with others for food and space in order to live on as depicted in the right side of slide. In this competition for space and food, the species with advantageous traits, such as suitable structure for a particular environment, survive.

The 5th element of the theory is known to pre-Darwin Muslim scholars. Al Biruni states: 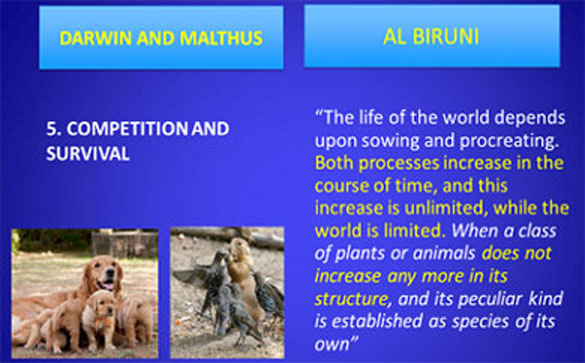 What Is The Driving Force For Evolution?

Materialists among scientists argue that biological evolution is an “inherently mindless purposeless process.” They argue that impersonal laws rule the universe and that atoms are at work in the operation of life. Biologist and atheist Richard Dawkins insists that contingency and natural laws operating over a long period of time, account for evolution. Richard Lewontin, a proponent of scientism, states that “materialism is absolute [and] we cannot allow a Divine Foot in the door.”

On the other hand according to Qur’an, natural law is only an extension of Mighty Arm of God. A few verses are quoted in the slide as an example.

According to the above verse, what is known to science as water cycle and germination of plant life happens as a result of Divine plan.

This Qur’anic guidance is reflected in the views of Muslim scholars.

According to the pre-Darwin Muslims, the nature is an office of God that drives the evolution by carrying out the God-delegated duties.

If we replace “generate substances” and “change essences” with our modern technical terms--mutation and genotype, it would read the slide as follows:

Al Biruni also believed that the nature is an office of God with assigned duties.

According to the 7th element of the theory of evolution, human is only an animal.  The pre-Darwin Muslims accepted it centuries ago. 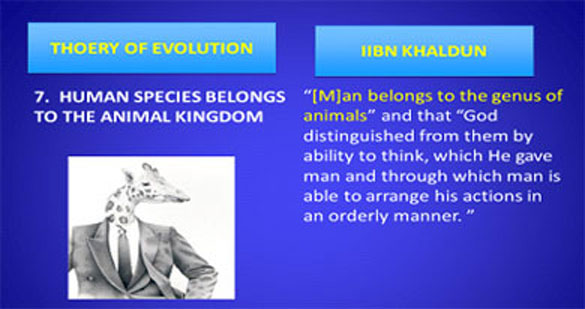 So far, I hope that I met the objective of answering first three questions and showed that Muslim scholars almost verbatim described seven core elements of the theory of evolution centuries before Darwin.  Our venerated pre-Darwin Muslims scholars, who created the golden age of Muslims, did not disassociate their Iman (i.e., Acknowledging God with full sincerity of heart while accepting all his attributes and their obvious corollaries) with their faith in divinely guided evolutionary origin of all life including human species.

The final question is in the next slide. 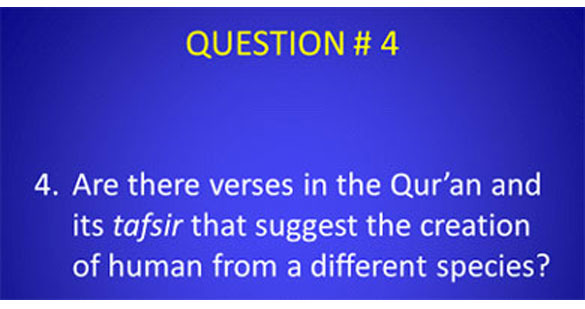 There are many verses in the Qur’an explaining a divinely guided process to an evolutionary origin of all life including human species, for example, the Chapter (6) sūrat l-anʿām (The Cattle), Verse 133. 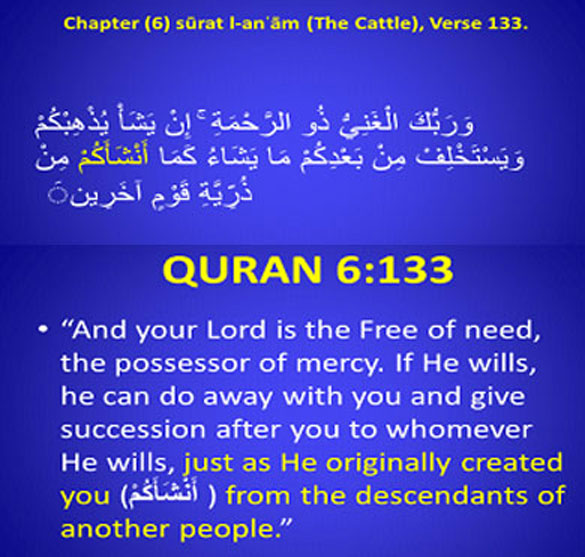 If we introduce our modern technical term into his work, it will read as follows:

John William Draper was a famous American scientist and a contemporary of Charles Darwin. He served in the position of president of New York University and was the first president of American chemical society. Six months after the publication of Darwin’s book, Origin of Species, Professor Draper presented a paper at the meeting of the British Association for Advancement of Science entitled “The Intellectual Development of Europe Considered with Respect to the Views of Mr. Darwin.” During the discussion of this paper, Bishop Wilberforce of Oxford contemptuously inquired of Thomas Huxley, an eminent scientist and advocate of the theory of evolution, whether Huxley claimed his descent from monkeys “through his grandfather or grandmother.” During the discussion of this paper, the meeting side-stepped and discussed Origin of Species in a scientific meeting for the first time.  As you can see, John W. Draper was closely associated with Darwin’s work. He did not identify the theory of evolution with Charles Darwin but Muslims, as evidenced below. 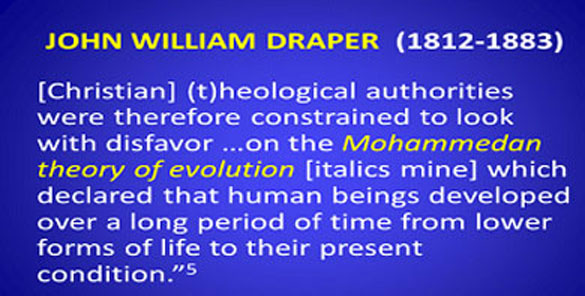 1. It is a Muslim duty to study the origin or creation of life and human.

2. Pre-Darwin Muslims scholars’ description of origin of all life is consistent with modern theories of evolution.

3. Natural laws without God is nothing more than a glove without God’s Hand in it. All that happen in the universe by the gloved hand of God is done by the Mighty hand and not by the glove.

4   Evolution, therefore, is a process not a power; a method of operation, not the operator.

I have not dealt with few major and important topics, such as the creation of Adam, the location of forbidden tree, divine design, teleology, random events, etc. Each of these topics must be dealt separately.