Astronomy and Astrology Were a Big Part of Islam's Golden Age

Thousands of Twitter accounts, hundreds of apps, and countless millennial conversations on the topic. If astrology came to mind after reading that first sentence, then you guessed right. The pseudoscience - that makes predictions and assumptions about human and terrestrial events by studying the movements and relative positions of celestial objects - has got some millennials in a state of obsession. 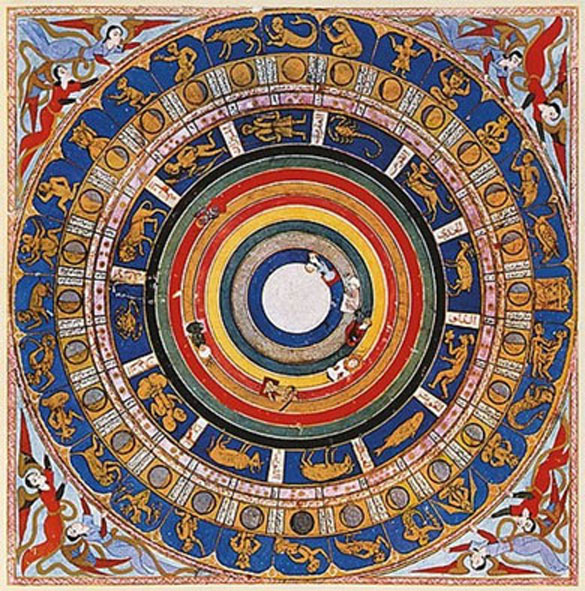 Celestial map, signs of the Zodiac and lunar mansions in the Zubdat-al Tawarikh, dedicated to the Ottoman Sultan Murad III in 1583 Source: Wikipedia

But while some people may think the study of orbiting moons to tell you everything you need to know about your crush is a modern age phenomenon, you'd be surprised to know it goes a long way back.

In fact, there is a general consensus that both astronomy and astrology arose in the Middle East and later spread to ancient Greeks and Romans. The two fields are, in fact, inter-related as astronomy studies the positions, motions, and properties of celestial objects while astrology delves more into how these movements affect people and events on our dear planet.

Both fields have been of much importance to the Muslim world. For starters, while Europe was in an intellectual coma due to the suppression of secular education by the church during the 13th century, the Islamic empire was entering its own Golden Age, relying upon knowledge of the constellations to make timely calculations for prayers and fasting. Medieval Muslims had to study celestial bodies to make accurate guesses of the direction of the Kaaba (which Muslims face while praying) and predictions on when Ramadan would arrive.

Perhaps one of the most prominent names in the study of the universe is Ibn Yunus, an Egyptian astronomer who found mistakes in his predecessors' calculations about the movement of planets. He discovered that the Earth wobbles one degree every 70 years, and later used that math to conclude that Earth was indeed not the center of the universe, revolutionizing the science of astronomy forever. As time went on, other Islamic scholars advanced Ibn Yunus' work and built upon it to develop theories in trigonometry and algebra.

Muslims may be surprised to find out that astronomical observatories were built in Iraq very early on and were used to study the movement of the stars and neighboring orbiting planets. Subsequent models were later built in Iraq and Iran, way before the telescope was even invented.

Enter Ibn Al-Haytham, who way down on the timeline in the 16th century became a world-famous astronomer for cracking the code about how humans perceive light. You might remember him as the father of optics because he was the one to figure out that light doesn't travel in a straight line out of our eyes.

Does the name camera obscura ring a bell? It's a scientific experiment developed by non-other than Al-Haytham under which light-sensitive materials where placed in the opening of a simple box to reveal a projected reversed and inverted image. Not only did his work later aid in the development of the telescope but he also coined the term "scientific method" to refer to the use of experiments to test a theory.

And honestly, one cannot talk about Muslims and astrology without mentioning the Ottomans. Astrologers were deeply rooted in Ottoman society during the rule of Sultan Mehmet Al-Fatih, or Mehmet the Conqueror, who conquered Constantinople (modern-day Istanbul) and brought an end to the long-reining Byzantine Empire when he was just 21 years old.

It is said that during his reign, mathematics, astronomy, and astrology reached their peak, as he would regularly invite and assemble scholars from all over the world to discuss these issues and advance their studies.

Over most of the six centuries of Ottoman rule, both astrology and astronomy were combined into a highly respected discipline; there was even a chief astronomer instituted at the Ottoman court in the mid-15th century who combined astronomical observations for purposes such as drawing up annual calendars and astrological functions. (This role is no longer existent.)

During the Ottoman empire, astrologers played a big role in mosques to determine the times of the five daily prayers. And just like any field, the study of astrology became an intricate one that called for proper education. And without universities, the advancement in the field wouldn't have been possible. All credit goes to one Muslim woman.

In 859, Fatima al-Fihri established the University of Al-Qarawiyyin in Fez, Morocco, which is not only the longest-standing university but also the oldest existing educational institution in the world. Al-Qarawiyyin grew to become one of the leading spiritual and educational centers in the Muslim world, attracting scholars and students from various religions and locations. The university expanded its course offerings to include educational subjects apart from religious teachings including astrology, math, and physics.

Thousands of pages can be written on the impact Muslims had had on the study and advancement of both astronomy and astrology, but unfortunately today, the same exhilaration is nowhere to be found.

Most Muslim scholars today make a clear distinction between astronomy and astrology, considering the former lawful for being used in the direction of prayer and the sighting of lunar months. Astrology, on the other hand, is believed to be based on illusions and considered haram (unlawful) for predicting the unknown, which only Allah (God) knows.

No matter what your personal beliefs on astronomy and astrology are, it's safe to say knowing a brief of Islamic history is enchanting at the very least.