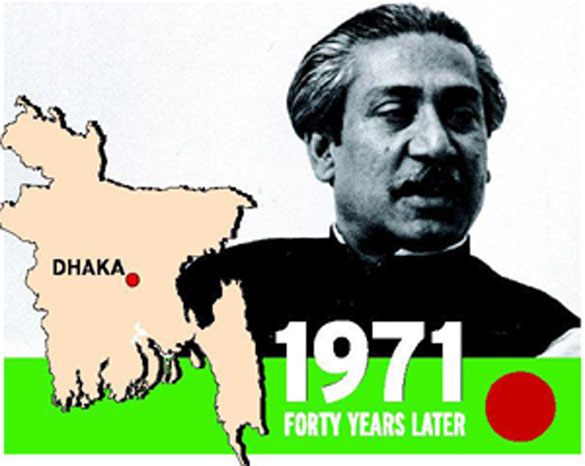 Four decades on, trials for the atrocities committed during the 1971 independence war are finally being held.

Bangladeshis will come together this year to mark the nation's 40th anniversary of independence.

The celebration comes at a time when the Bangladesh government, now under the leadership of Sheikh Hasina, is making its second attempt to bring to account Bengalis alleged to have collaborated with the Pakistan military during the 1971 war of independence.

The struggle against the Pakistan military, which resulted in hundreds of thousands of civilian deaths, had widespread national support.

However, there remained some Bengalis — particularly members of Islamist parties, like the Jamaat-e-Islami — who during the independence war collaborated with the Pakistan military and continued to support a unified Pakistan.

Soon after the creation of Bangladesh, the new Awami League government under the leadership of Hasina's father Sheikh Mujibur Rahman passed a law which allowed for the prosecution of ‘collaborators' — both those who committed violent crimes and those who simply gave the Pakistan military their political support.

The 1972 ordinance led to the arrest of more than 30,000 people (all Bangladeshis), and trials took place across the country.

However, within two years, following a spate of acquittals, allegations that the trials were turning into witch-hunts and difficulties in pursuing the cases given the lack of administrative capacity, Mujib announced an amnesty for those convicted of ‘political' crimes.

Though, technically, this meant only political ‘collaborators' were exempted, the amnesty effectively resulted in the end of all trials including those involving violent offences.

In the dying days of the war many key Jamaati leaders fled the new state of Bangladesh.

Indeed, there would be little need for the second current round of trials had many of these men, including Ghulam Azam, the Jamaat's head in 1971, not returned to Bangladesh following the assassination of Sheikh Mujib in August 1975 and restarted their political activities.

During the subsequent 15 years of military/autocratic rule, involving severe restrictions on freedoms of expression and association, civil society groups had little opportunity to raise the issue of these men's alleged involvement in war crimes.

But following the fall of General Ershad's regime in 1990, and the return of political democracy, the demands were re-articulated by citizens' organisations and the families of those who had been murdered or disappeared. These demands were further spurred in response to the Jamaat's success in winning 18 parliamentary seats in the 1991 general elections.

Now finally, twenty years later (during which the Jamaat completed five years in a governing coalition), Bangladesh has initiated a new process of trials for the atrocities committed during the 1971 independence war.

As of today, five top leaders of the Jamaat-e-islami are detained. The trial of one of them, Delwar Hossain Sayedee, has now started. Two other leaders of the main opposition party Bangladesh Nationalist Party have also been detained, though one has obtained bail. All of them deny any involvement in war crimes.

Though far from perfect, this second attempt at seeking accountability looks like it may well be more successful than the first.

Instead of attempting to prosecute thousands of people, the investigators currently have in their sights less than twenty men.

The trials are taking place in a specially designated court room in front of three judges, two being from the Supreme Court. The process is relatively well organised with the local defence lawyers (advised by three British barristers who are though not allowed into the country), provided with opportunities to present their case.

The Tribunal has also given a number of protections to the accused men which are not usually provided by ordinary Bangladesh courts including short periods of remand for questioning, allowing a lawyer as well as a doctor to be present in an adjacent room during interrogations, and improved medical facilities whilst in jail. In another small but significant procedural improvement, the evidence is also being transcribed contemporaneously by a stenographer.

However, the Tribunal does not provide all the rights available to an accused in an ordinary Bangladesh court. Most significantly, the first amendment of the constitution precludes fundamental rights from applying to these men. Whilst the tribunal's rules of procedure incorporate many of the rights required to ensure a fair trial, it remains the case that during the pre-trial and trail process, the accused still cannot seek any remedy from the High Court or indeed any other court. Only against conviction can an appeal be made.

Domestic standards aside, the tribunal is far from meeting many international standards and practices.

One major concern raised not only by the defence but some international observers is that the tribunal's governing law defines the offence of ‘crimes against humanity' without a number of basic elements that are required in international law.

In recent weeks Sayedee's lawyers have also criticised the lack of preparation time they have been given for the trial and questioned the legislation that requires them to provide to the prosecution all the witness statements in support of their client right at the beginning of the trial.

Last week, the opposition Bangladesh Nationalist Party issued a statement calling the tribunal a ‘rubber-stamping body' and accusing it of being ‘an illegal and unconstitutional process for extra-judicial persecution of political opponents.'

Whilst legitimate concerns about the tribunal exist, there would appear to be nothing in the tribunal's governing law or current practice that justifies such trenchant criticism. Indeed as stated above it is an improvement in many ways from most domestic trials.

Strategically, the BNP's decision also appears myopic since there is significant national support for the tribunal.

However, the fact that all seven accused are prominent leaders of the opposition has raised questions about whether there is an element of political opportunism to the entire process.

The government certainly has a lot to gain politically from the trials, and repeated comments from ministers about their likely outcome have exacerbated concerns about the tribunal's independence.

The optics certainly do not look good.

The best response to this is clear. The trial process must ensure not only that justice is done but seen to be done.

If convictions take place following an objectively fair assessment of the evidence, with all the appropriate protections and opportunities for the accused to defend themselves, objections regarding the political affiliation of the accused will have limited impact.

Whether this happens of course is yet to be seen.

As the trials begin, national and international observers will watch the process closely.

As, of course, will the thousands of victims of war crimes, who have already waited a long time for justice.

David Bergman is the Editor, Special Reports for the Bangladesh paper, New Age